Tonight’s supper would be pretty simple and easy; brats on the smoker; fry some Mrs. T’s cheese and potato Pierogies and some of my Fermi slaw. I call it Fermi slaw because it came from salting my cabbage for kraut and letting it set overnight before putting in a jar or fermenting crock. I always had to have a taste and the slightly salty taste that had started the first step of fermenting was good. I decided to take some to this step and make some slaw with it.

I had a half medium head of cabbage shredded, added 2 teaspoons of sea salt and stomped. It set overnight in a covered tupper ware bowl. I added 2 good tablespoons on Hellman’s mayonnaise, 3 good tablespoons of Marzetti’s slaw dressing and 3 good teaspoons of sugar. Mixed all together well and it set in the fridge over 5 hours before serving.

Our Canadian friends decided to share some of their cold air early this year. It was a cold 31 deg. F today and looks like it will be 20 deg. below normal for at least a week.

For my brats I had some pre-cooked garlic and cheese brats thawed out. I did them on my Traeger at 180 deg. and was running about 200 deg. grill level for 45 minutes. I then went to 275 deg. grill level for 45 minutes. The last 15 minutes I fried the pierogies. I had them thawed out and brushed with some melted butter. They were browned in a Lodge steel skillet sprayed with some olive oil 5 minutes per side. When I turned them I added some sliced onion.

My wife had ketchup on her brat sandwich; she doesn’t know mustard goes with brats! She did put some of the slaw on her brat. I had some Dijon mustard on my brat and ate the slaw on the side. It all tasted good! Mrs. T’s pierogies are always good and a lot easier than making my own. I did like the slaw and will make it that way again.

Brats on the smoker 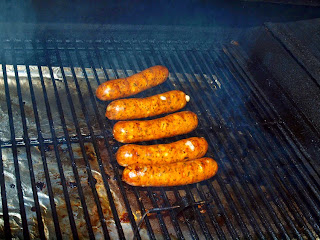 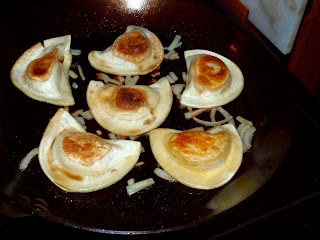 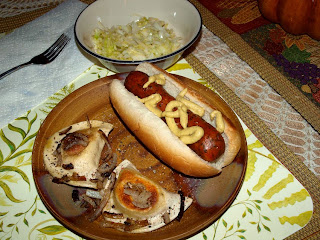