McClard’s BBQ  is in Hot Springs Arkansas. I saw a short show about the place on TV. Looking them up on the net I read their history and had to try some of their sauce. I ordered a bottle from Amazon; $14 and free shipping. If you buy it from their net site it is $15.95 plus shipping.

I have had the sauce for a while; I was hungry for some ribs and today was a good day to try it out. It was sunny, windy and 58 deg. I had a rack of BB’s from my butcher thawed out. I had a new potato recipe I wanted to try and some corn on the cob I had frozen to test out.

The potato recipe I adapted from one at Food52. I had a pound of baby gold potatoes, a sweet onion cut in 8 wedges, 4 cloves of garlic cut in half, 3 Tbs. butter softened, 8 sprigs of fresh thyme, coarse sea salt, fresh ground pepper and 2 Tbs. white balsamic vinegar. The recipe called for pearl onions but I couldn’t find any.

I washed, trimmed the ends from the potatoes and cut a few large ones in half. They went into my cast iron chicken friar I had sprayed with olive oil, along with the onions and garlic. I stirred to get the butter spread in even. I added some coarse sea salt, fresh ground pepper and the white balsamic vinegar. I covered the pot and in a 300 deg. oven for two hours; stirring every half hour.

Tasting the McClard’s sauce it was tangy, nice spice taste with a kick and a little sweet. I liked it. My ribs were sprinkled with a little red wine vinegar just to wet and added some Penzey’s Galena St. rub. I covered with plastic wrap and in the fridge for about 3 hours.

I got the ribs on my Traeger at 12:30 for 2 and half hours of smoke at 200 deg. grill level. At 3:00 I brushed both sides with sauce and wrapped in foil; back on meat side down for 2 hours at about 230 deg. grill level. I had the potatoes ready and they went in the oven at 4:00. At 5:00 I unwrapped the ribs, back on the grill meat side up and brushed on some sauce. They were fall apart already so I dropped the heat back some. I did the corn on the cob in my rice cooker.

I served it all at 6:00 tasted great even though the ribs were overdone. I loved the potatoes; wife was not hat crazy about them.  My corn was just like from the grocery, a little too mushy but it did have the fresh sweet taste. I really liked the sauce but the wife said a little too hot for her; she can’t stand any heat. I think it would be great on a pulled pork sandwich. I would say the sauce is among the best I have ever tried. If I could buy the sauce cheaper I would be using it a lot but at $14 for 18 oz. I doubt if I will ever buy any more.

They say you can buy it pretty cheap from the restaurant so if you eat there and like it you better stock up.

Ribs ready for the smoker 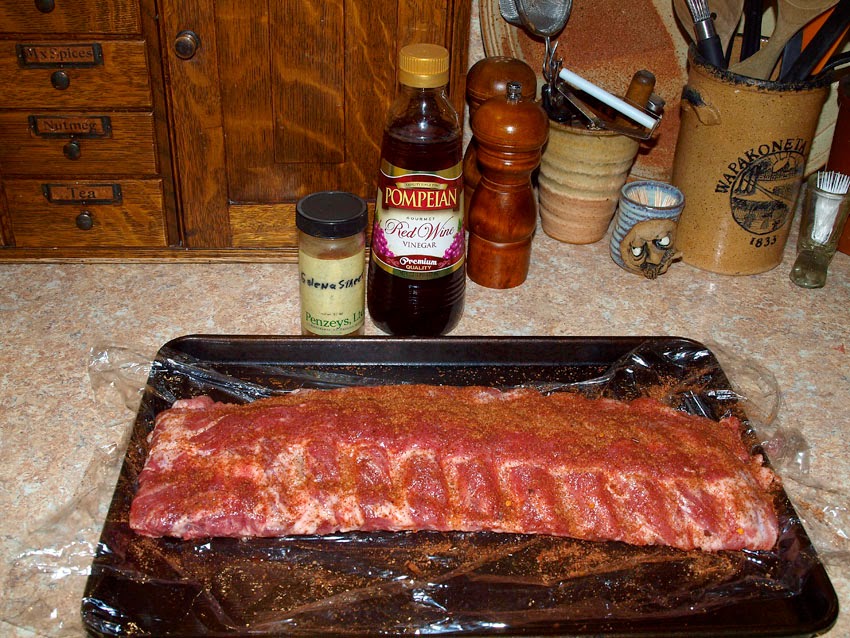 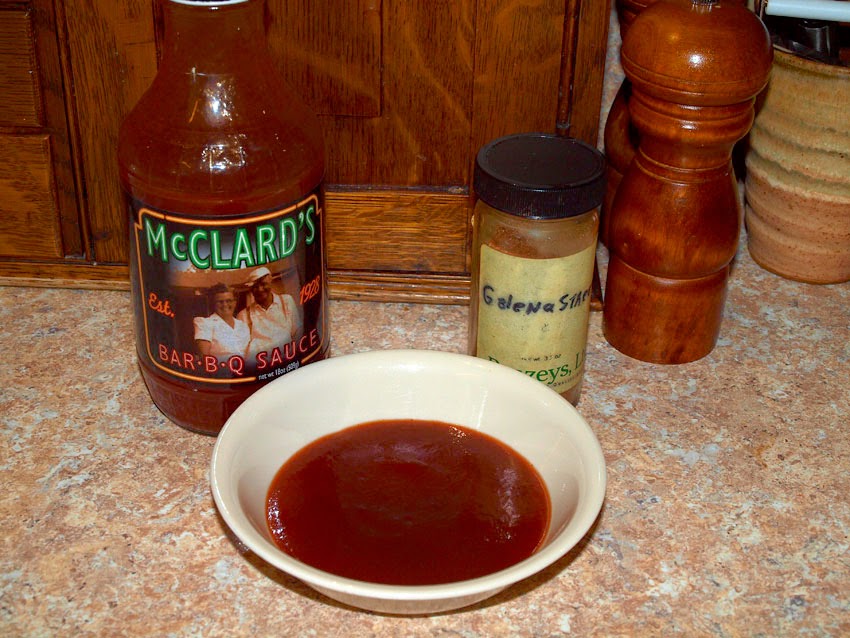 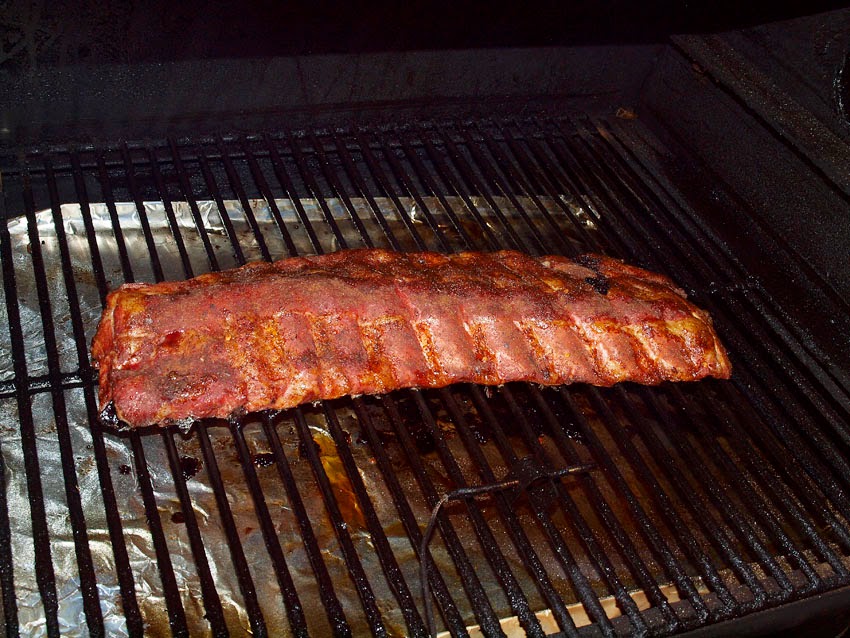 Sauced and wrapped in foil for 2 hours 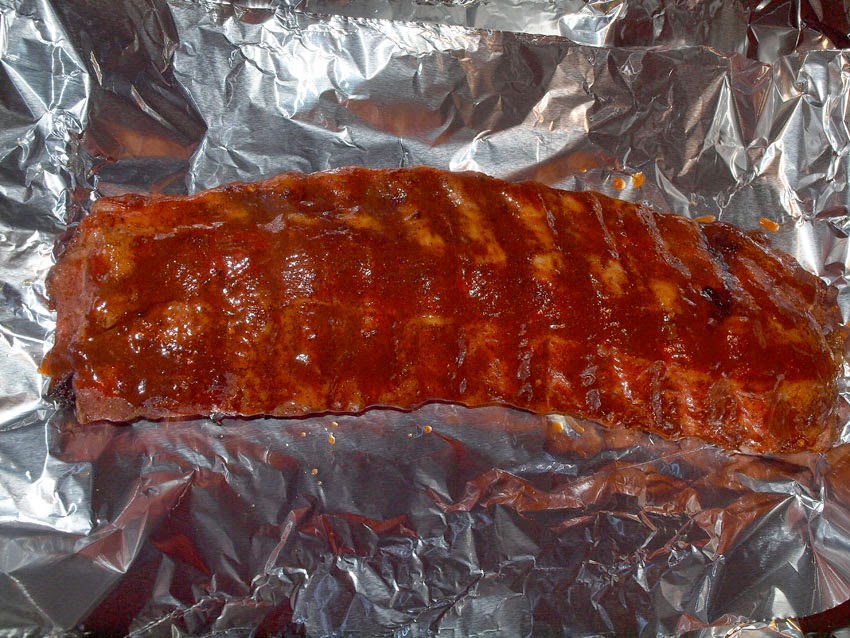 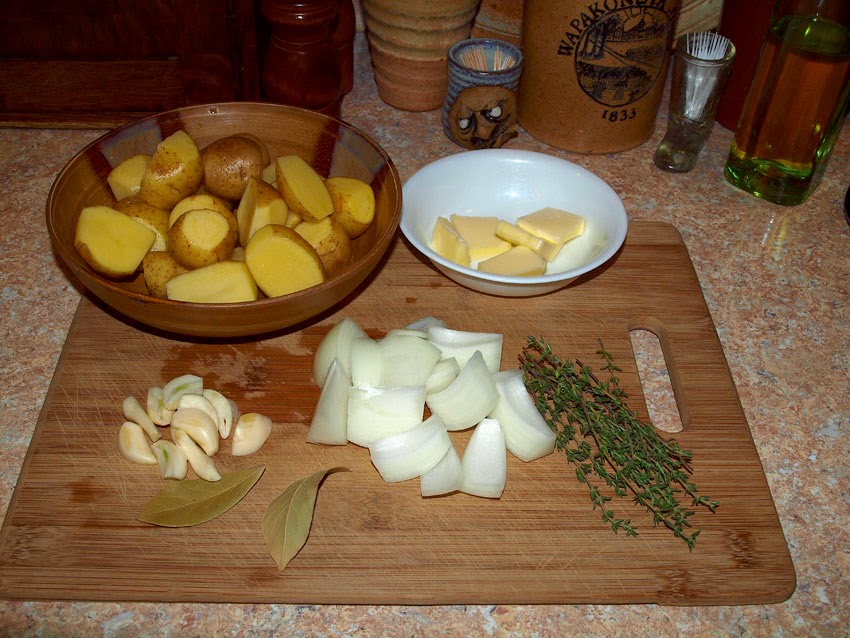 Mixed up and ready to bake 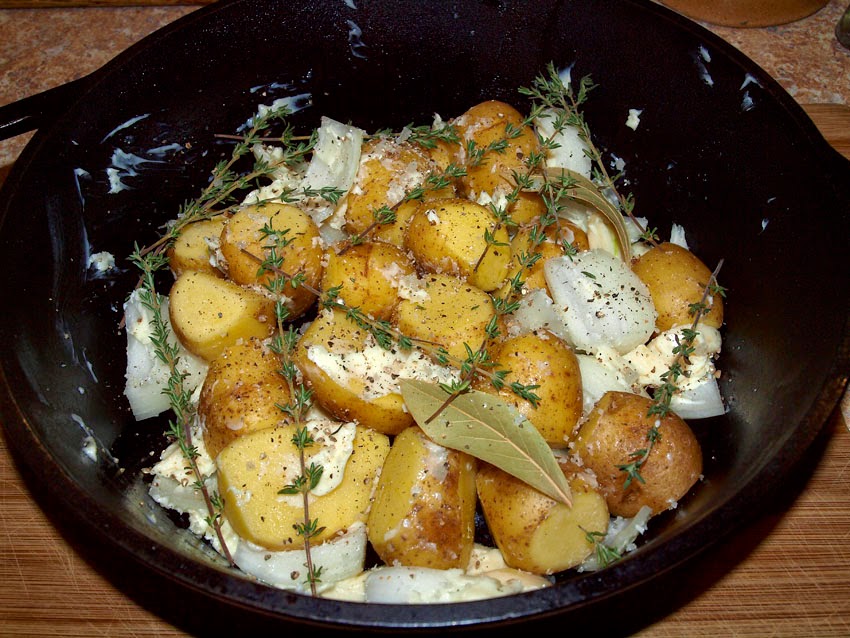 After 2 hours in the foil 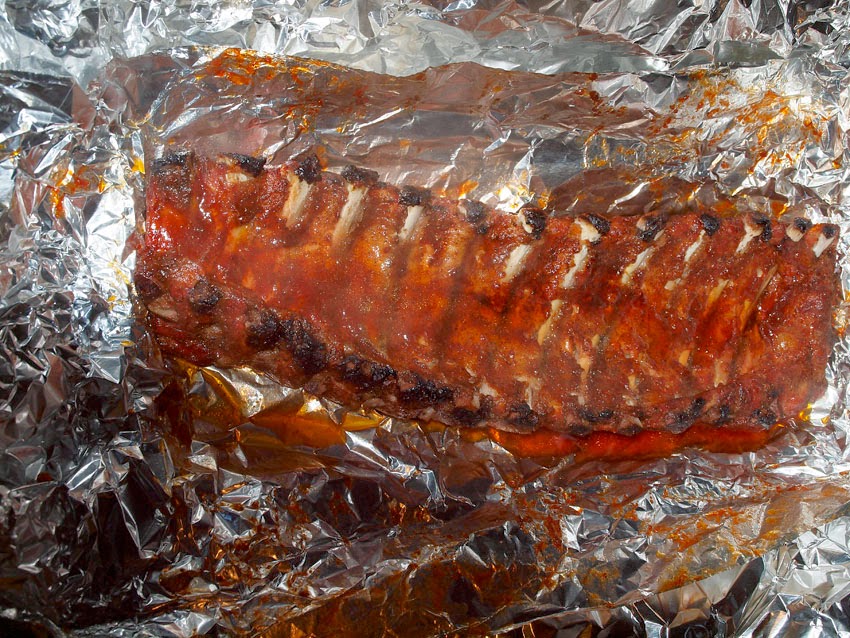 Sauced and an hour to finish 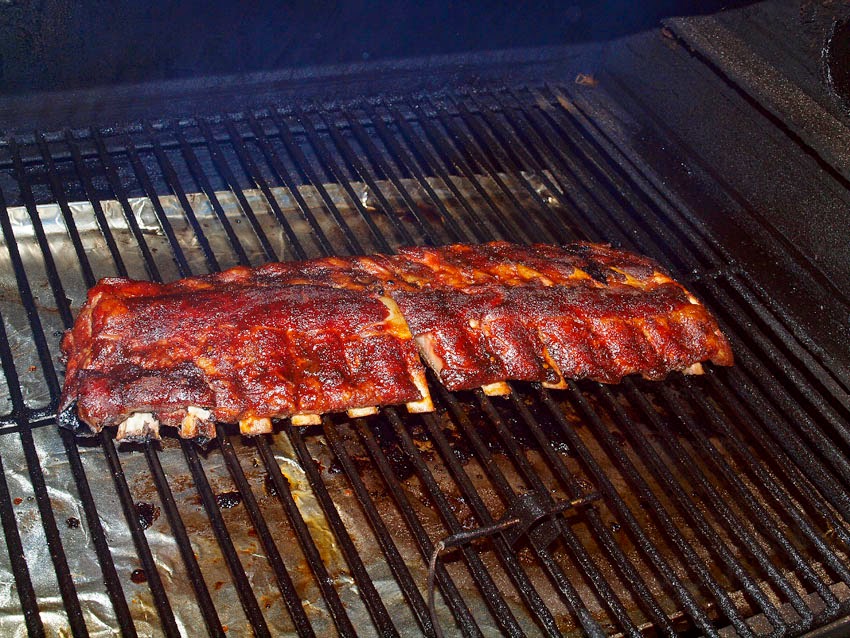 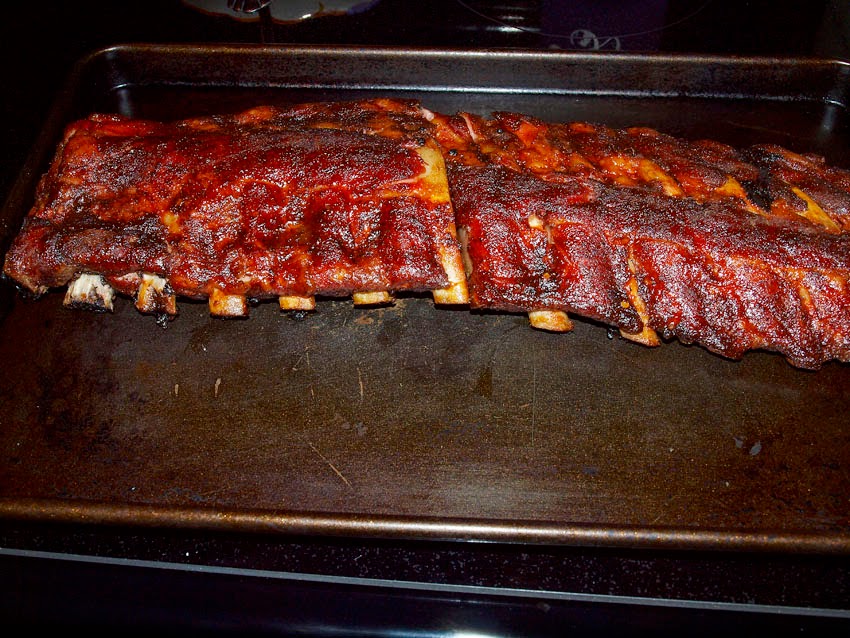 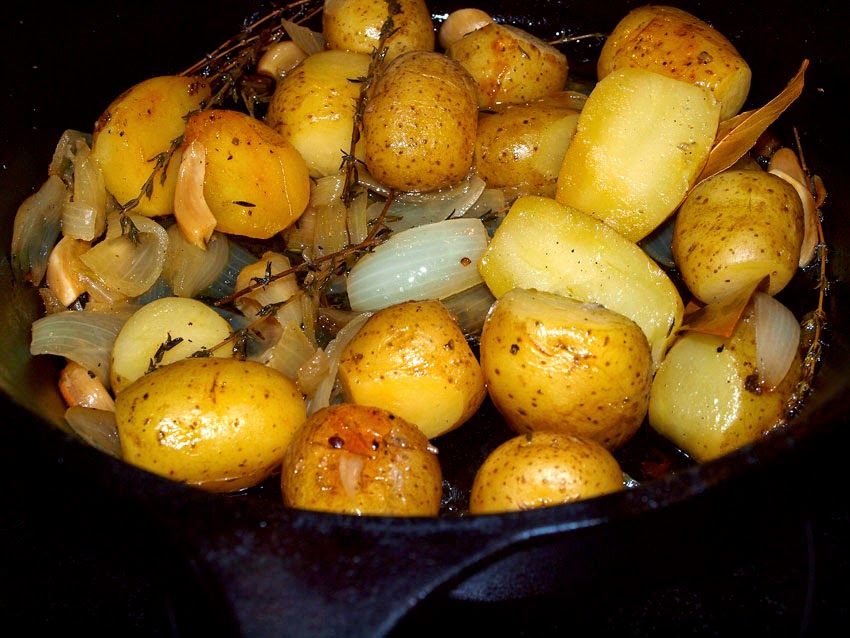 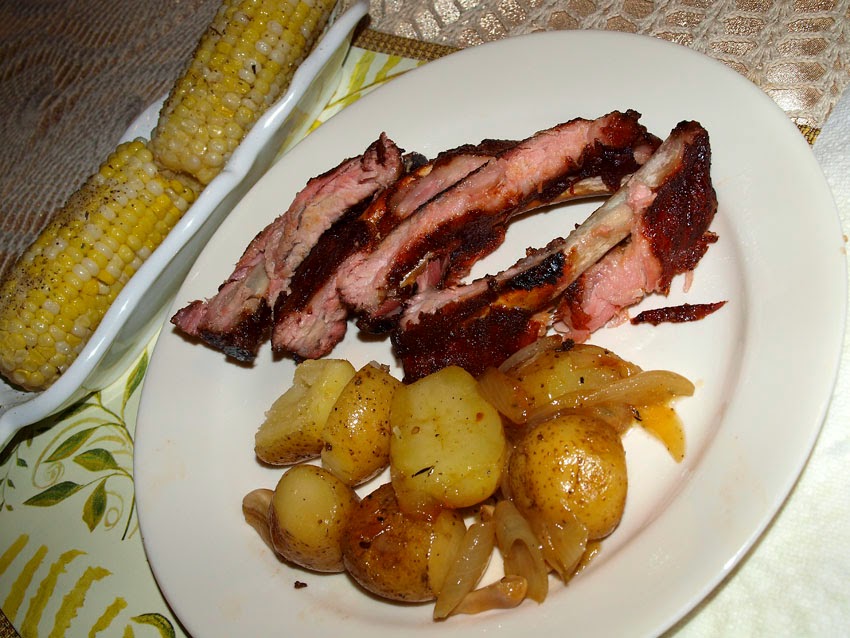