For Sunday’s supper I asked the wife if she wanted chicken or pork, she said pork. I had in mind to do a pork shoulder roast with veggies, potatoes, carrots, and celery. I couldn’t find a shoulder roast small enough so settled for a pork loin sirloin roast, bought some baby gold potatoes and some Brussels sprouts for me. I knew I had carrots and celery.

I got the roast in brine for 2 a half hours; seasoned, tied and in the fridge for one hour.  My seasoning was just salt, pepper and garlic flakes. I browned it on my Weber Q100 3 or 4 min. per side then went on a tray over some sliced onions and in my Traeger at 350 deg. grill level.

I had my veggies cleaned and just one carrot but I had some parsnips so used them for me and the wife could have the carrot. I drizzled olive oil over the veggies and placed around the roast and added salt and pepper.

It took about one and a half hours to get to an IT of 158 deg. I stirred the veggies near the end. I tented the roast and veggies while I put 3 pretzel bread sticks on the smoker to heat up.

It tasted pretty good, I had my potatoes, Brussels sprouts, parsnips and celery with mine and the wife had potatoes and carrots with hers. The Brussels sprouts and parsnips could have been a little more done, next time I would nuke the veggies some and then on for 45 minutes to brown up.

The pork sirloin is not my favorite pork cut, next time I will get a shoulder roast and cut it if it’s too large.


The sirloin roast is mostly white meat and has a little dark meat attached; it comes from near the hind leg. I figure if I want white meat I may as well do a loin. With a good brine a pork loin can come out tender and juicy.

Roast and Veggies on the smoker 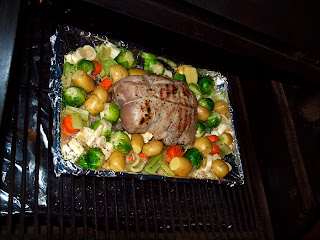 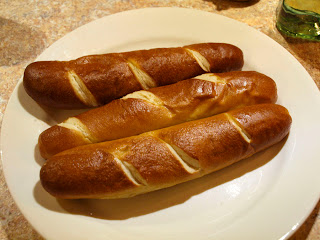 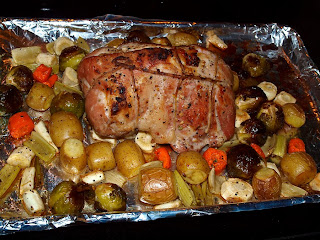 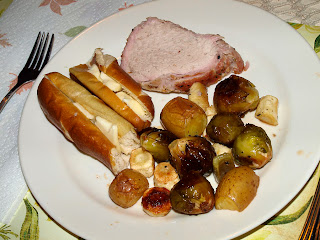