Cleaning and Re-seasoning My Wapak Skillet 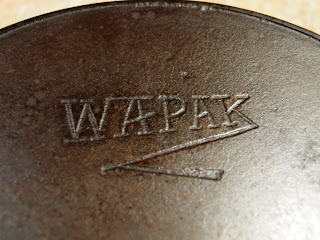 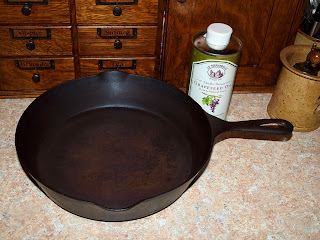 My wife and I first lived in Minster, OH for 3 years and then in New Bremen, OH for 3 years. Our home décor was country, early American. We went to a lot of auctions to buy things. That’s when I first noticed Wapak cast iron skillets. They were bringing pretty high prices even back then; the older ones with the Indian head logo brought more. I was not too interested in them then.

We moved to Wapakoneta, OH in 1973; my wife was born and raised here. Sometime in the 80’s I got interested in black powder shooting and joined a local club. Camping out and outdoor cooking went along with black powder shooting. I bought my first cast iron piece, a 12 inch skillet with lid. My son started playing soccer and all his games were on Sundays, the same day of our monthly shoots so I got away from shooting. I can’t remember ever using the skillet; later I loaned it to my neighbor. After my neighbor died, his wife gave the skillet back to me. It was pretty dirty and lay in my work shop for a few years.

The last five years I have bought several Lodge cast iron pieces, a 9 inch skillet, a 10 inch chicken friar, a 5 quart Dutch oven, and a small bean pot. I like cooking with it and use it in my oven, on my glass top range and in my Traeger pellet smoker. I also bought a 10 and 12 inch Lodge carbon steel skillets I really use a lot.

Early this year I noted the 12 inch skillet in my work shop and decided to clean it up. I had good luck cleaning two pottery dishes in my self- cleaning oven and decided to do the skillet and see how it came out. It came out completely clean of the old grease.

I read up on re- seasoning cast iron and found the best to me was using flax seed oil. You wipe on a small amount then dry it all off; this still leaves a light coat. You put in a 500 deg. oven for 1 hour then turn it off and let cool down. You do this six times and it will leave a nice black color and non-stick that will last. I could not find flax seed oil locally and when I tried to order some it was too expensive. I settled on grape seed oil and it worked just fine.

Last Friday I took my wife to get her hair done uptown. I did a little window shopping while she was getting it done. I saw a guy carrying two skillets that looked old. I stopped and ask if he had just bought them. He said I am trying to sell them, I looked them over and one was a Wapak no. 8. He wanted $50 for both and I tried to buy the Wapak for $25 and he said no I’d like to sell both. I said how about $30 and he took it. I knew that was a decent price from researching the net for one. It was pretty dirty but was sure it would clean up like I did the 12 inch.

I don’t go to many auctions anymore but my wife and her aunt do. I told them to watch for Wapak skillets for me. I had also been watching the internet for them; so I thought it a bit ironic I saw the guy on the street with one for sale.

Wapak cast iron skillets were made by the Wapak Holloware Co. from 1903 to 1926. The one thing you notice is how light weight it is compared to today’s cast iron skillets. It is not hollow but thin walled. I weighed my new lodge 8 and it was 5.25 lbs. The Wapak 8 hollow ware weighs 3.75 lbs.  All I can find is it says the decline in quality of iron ore and more modern manufacturing methods were the causes of them becoming thicker and heavier. Two other noted makers of hollow ware were Wagner of Sidney, OH and Griswold of Erie, PA and are sought after by collectors.

Very little history can be found about the Wapak Company. The logos on the back were an Indian head being the oldest, Wapak in block letters, one with the Wapak more pronounced and Wapak Z which had a Z like extension formed from the bottom of the K. The Wapak letters are also slightly tapered.  Mine is the Wapak Z and I would say it was the latest of the logos but that makes it at least over 87 years old. Some of the older skillets go at $100 or more, the odd sizes bring more since they are scarcer. The Indian heads are more yet and highly sought after.

Another thing people like about cooking with the old Hollow Ware is the very smooth interior. The Lodge cast iron ware sold today has kind of a grainy dimpled inside and some people claim it makes it more non-stick than the smooth. My 12 inch was made by Lodge and has a machined inside. The Lodge also comes pre-seasoned and I have seen some say they don’t like it so they remove it and do their own. I find that is too much work and have had good luck cooking with mine. If they ever need it I can clean then and re-season.

I did my Wapak skillet in the oven self-clean cycle for 2 hours and let cool. It came out good, one thing I noted doing both the Lodge 12 inch and the Wapak 8 inch skillets was the rust. Either the rust was already present or the high heat cleaning introduces it. I think it is already present since the older Wapak skillet had a lot more of it. It seems to be permeated into the cast iron so I didn’t try to clean them more. After the first seasoning of the Wapak skillet I did sand the inside some.  I started over doing the six coats and below are some photos of the steps.

I used my seasoned Wapak skillet to fry some bacon and it did well and cleaned up with ease. I will probably do some bacon in it a couple of more times before using it for other cooking. 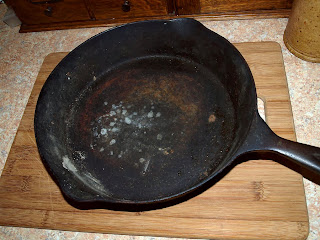 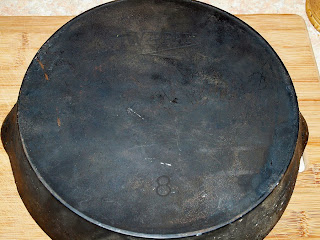 After self-cleaning in the oven 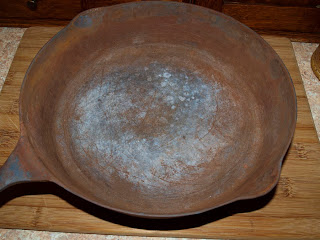 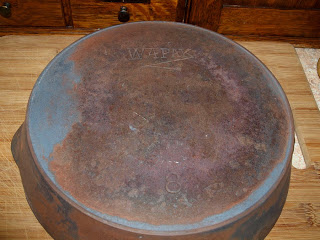 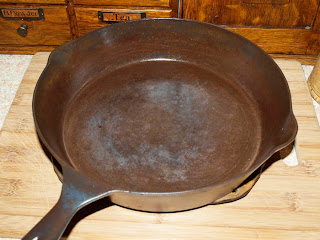 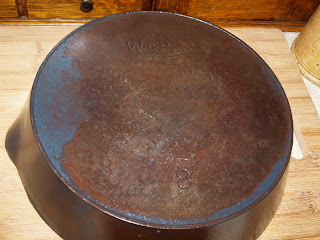 After sanding the inside 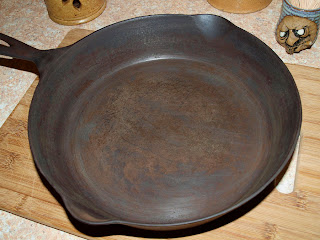 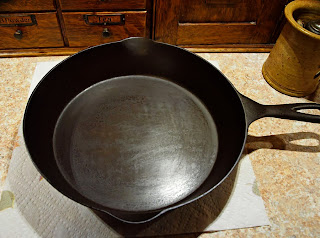 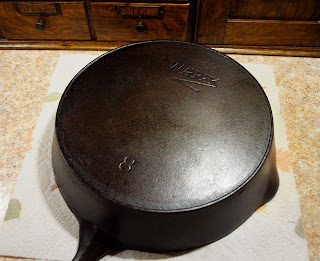 After the sixth seasoning 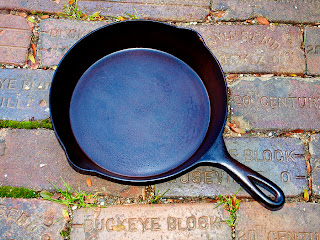 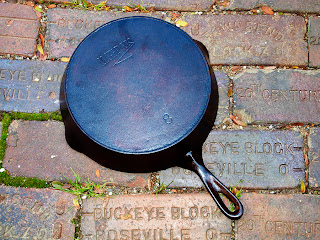