Spare Ribs with 2 Rubs and 2 Sauces

It’s been a busy week end here. Even though my wife’s new knees and legs get stronger every day; I am still pretty much doing all the work. Our daughter came home for the week end from the Chicago area. The grandson’s 9th birthday was today and his Mom’s is tomorrow.

Saturday they had a birthday party at their home. A lot of people, both in laws and cousins, Gavin’s soccer team plus kids! They had pizza, & glad I didn’t have to cook, didn’t have time anyway. The party was from 12:30 until 3:00. Gavin’s team had a game at 4:30. Sunday the kids were in and out to visit and our daughter left at 4:00 to go home.

I had some spare ribs to do today, the wife had therapy at 1:30 and I need to get the yard done before rain comes in tomorrow night.

I trimmed the ribs and cut in half; I had a pound of good meaty trimmings to do. I had some Rufus Teague’s rub and some Walnut Creek chipotle apple butter sauce for my half of ribs. For my wife’s half I did my usual Penzey’s Galena Street rub and Kah Meats BBQ sauce.

The ribs were wet down with some red wine vinegar and the rubs then in plastic bags and in the fridge overnight.  I decided to go with2-2-1 for the ribs. Two hours of smoke at 180 deg., then in foil drizzled with some Hoppin Helles for two hours at 225 deg. and one hour with sauce to finish.

I got the ribs on at 1:00 then took the wife to therapy at 1:30; back to watch the ribs until picking the wife up at 2:30. I mowed half the grass; I’ll try to get the other half tomorrow. I baked a take home and bake baguette and then put the potatoes in to bake and finish at 6:00.

When I took the ribs out of the foil at 5:00 they were done then, just needed firmed up but I had to wait on the potatoes. The 225 deg. setting was running about 240 and 260 at grill level so I left it there and sauced the ribs the last 40 minutes.

I served the wife her ribs along with the potato, a salad and bread. My wife said her ribs were perfect. I liked the rub and sauce on mine. I thought they might be too hot for me but were just right. After looking at some great ribs at LTBBQ over the week end; the ribs made me Happy!

After we just got done eating the daughter in law and grandson come with some of her giant birthday cookie and ice cream to have. Our son came later after High School soccer game and had ribs and potatoes. I ate some of the cookie then conked out in the lay back!

They had their cookie and ice cream and thanks much to the daughter in law for helping the wife clean up my kitchen!! 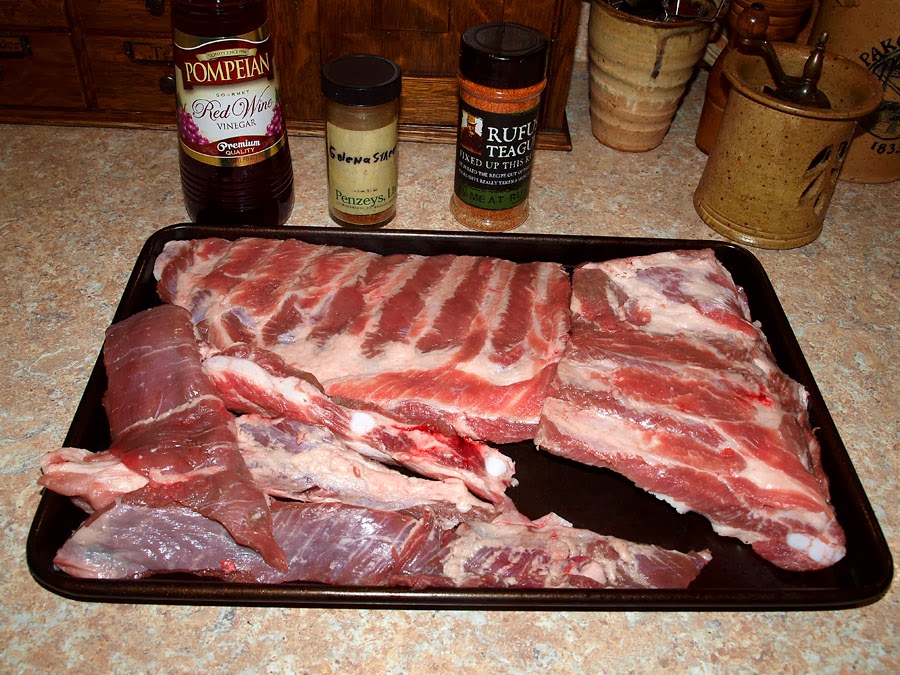 After the fridge, I added more rub 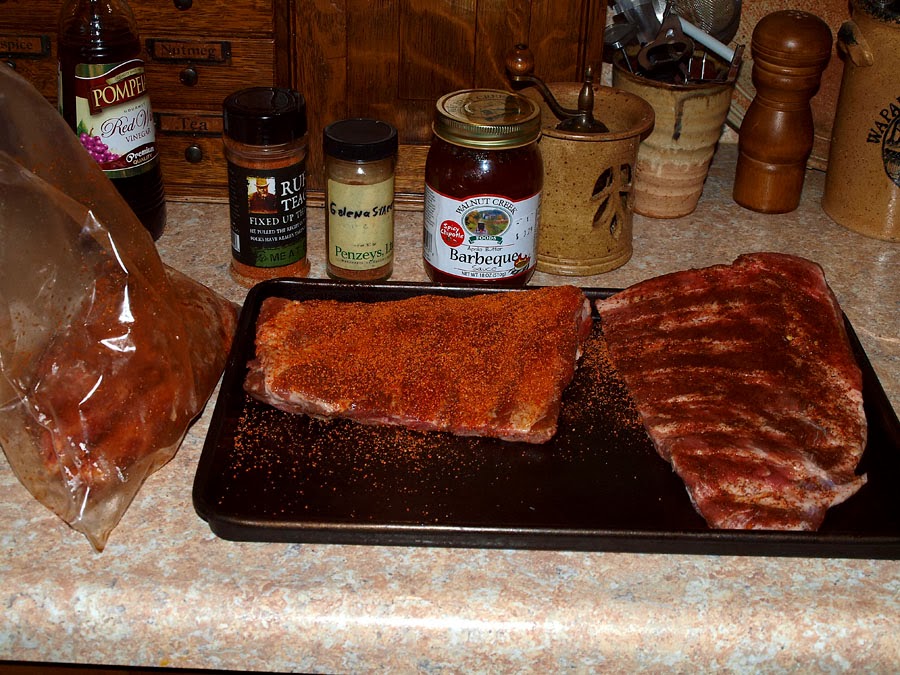 After 2 hours of smoke 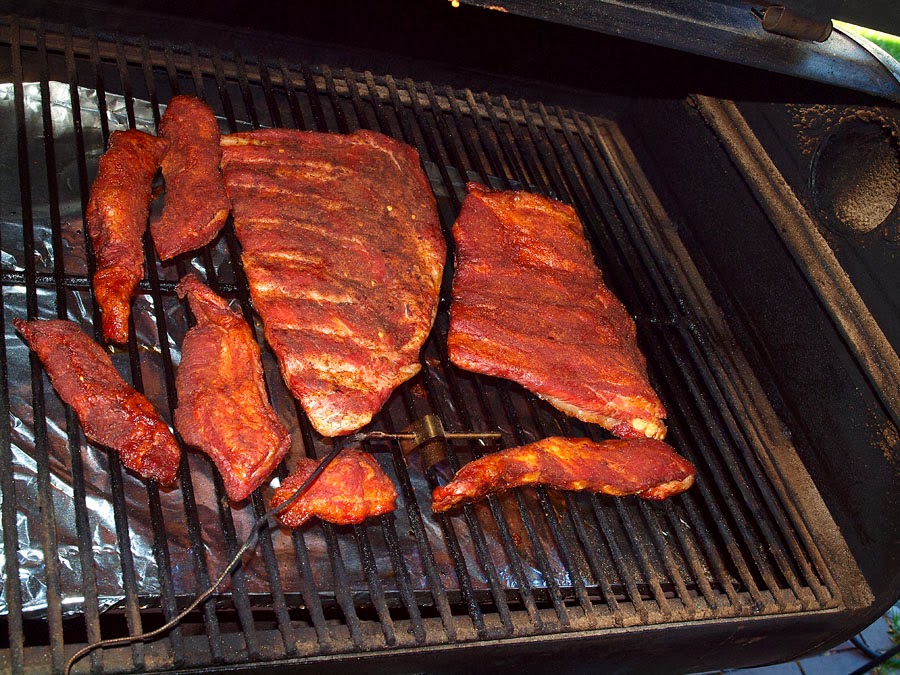 A half after foil for 2 hours 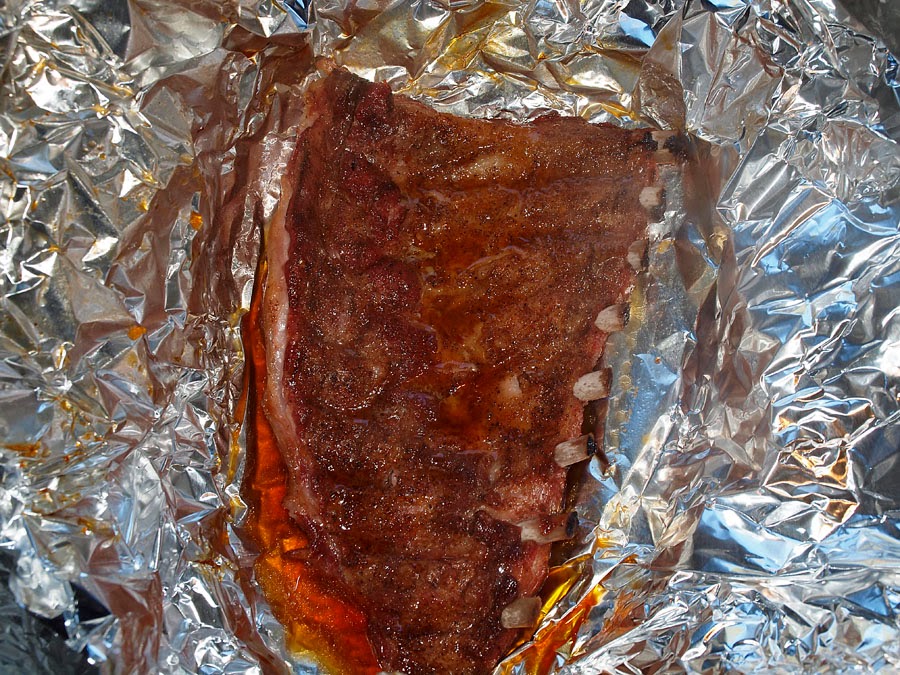 Ribs ready to sauce and I pulled the trimmings off 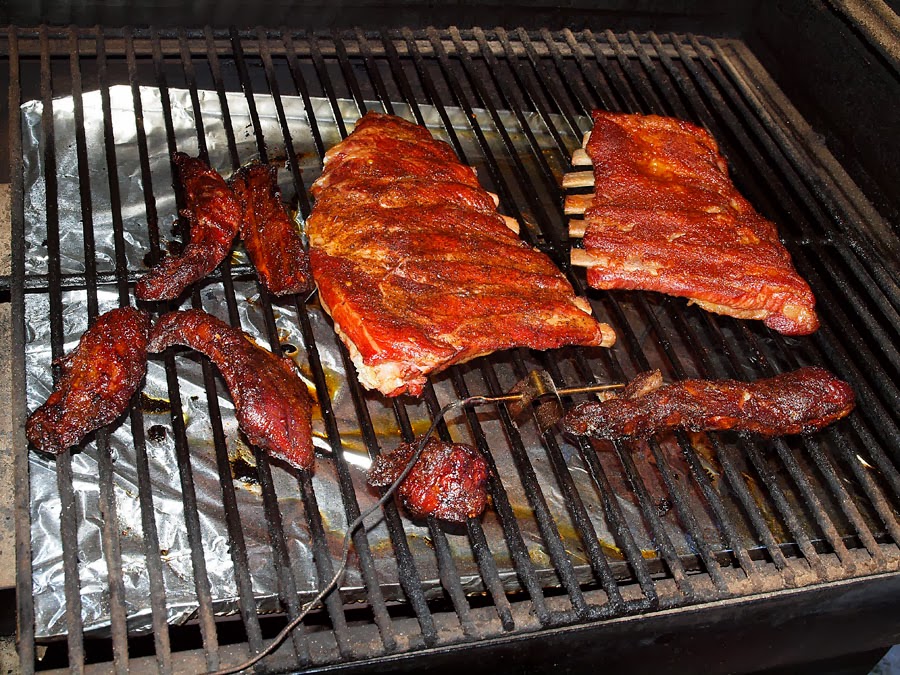 Saving the trimmings for beans later 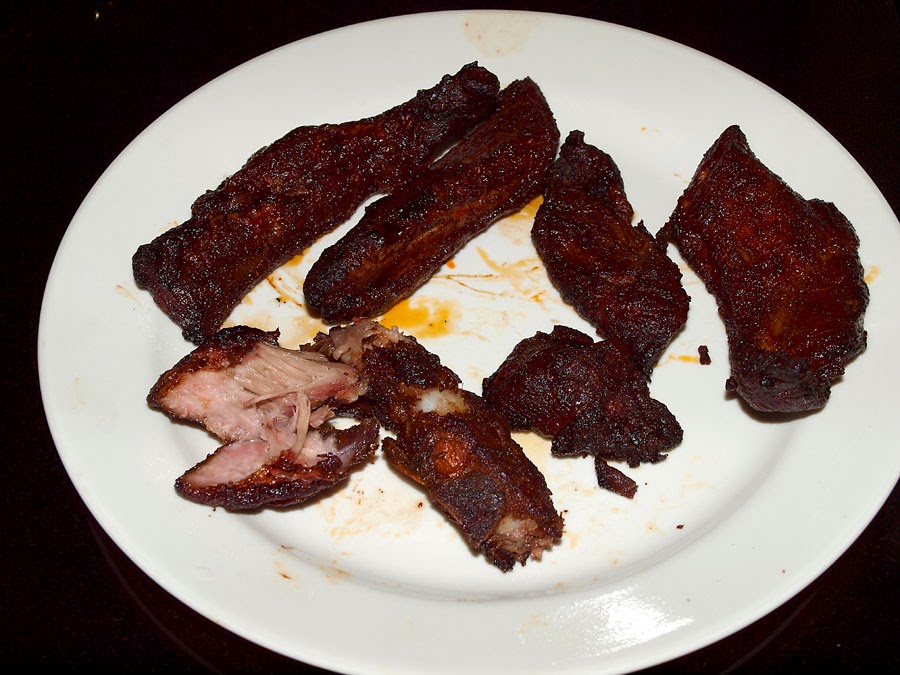 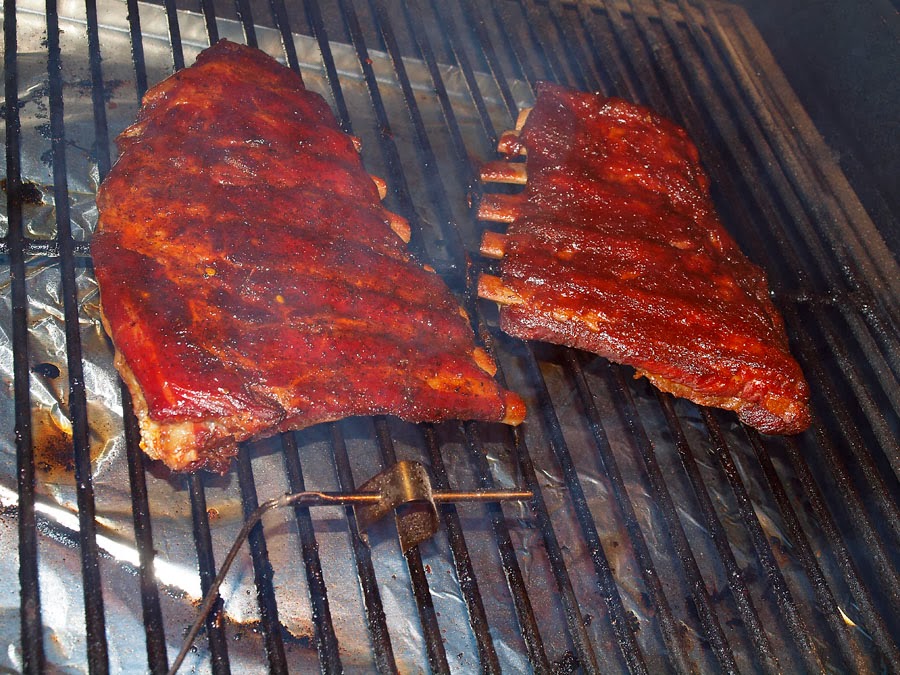 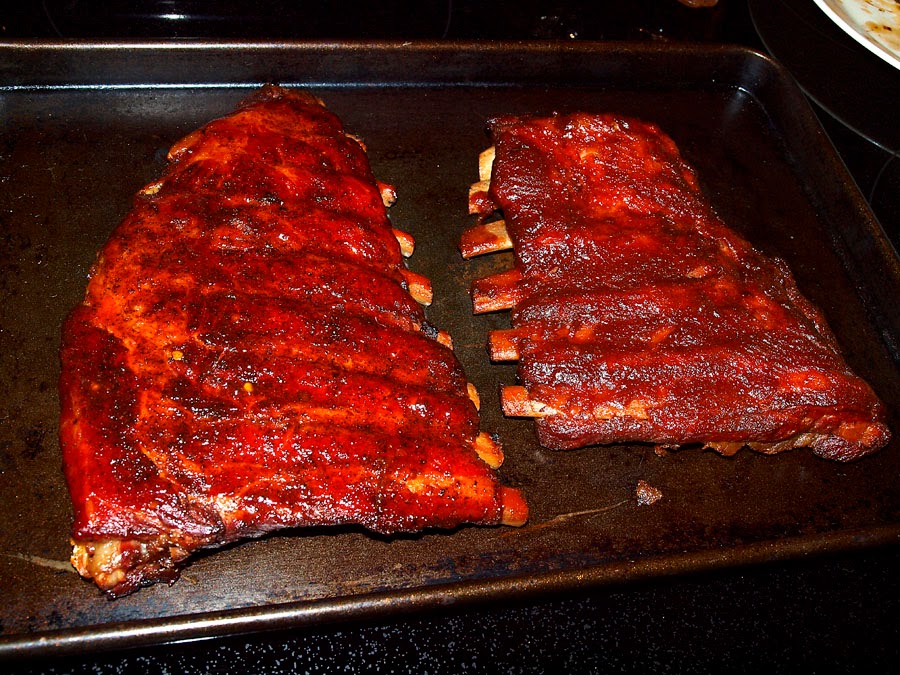 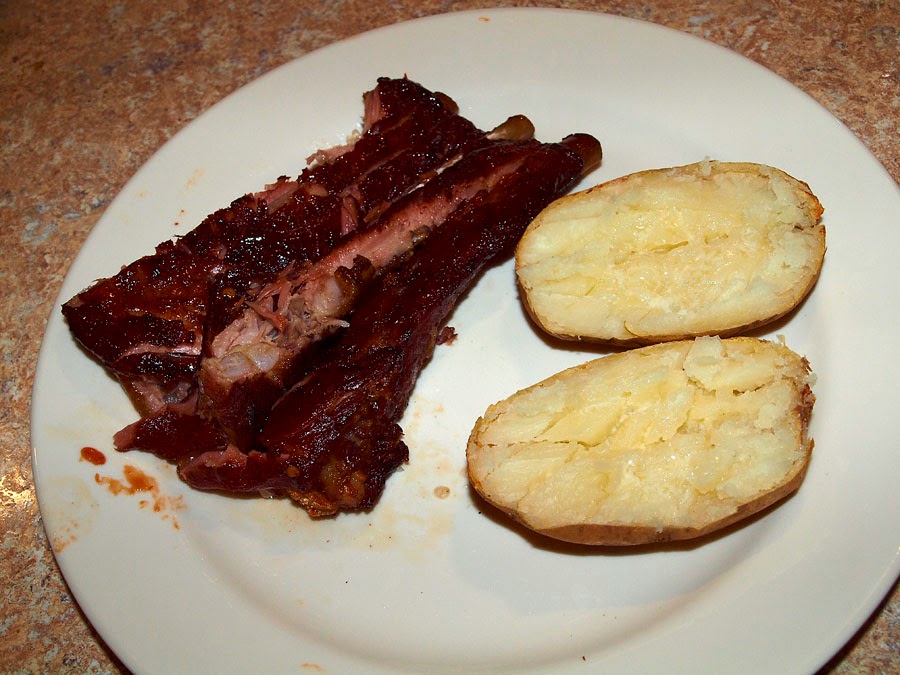 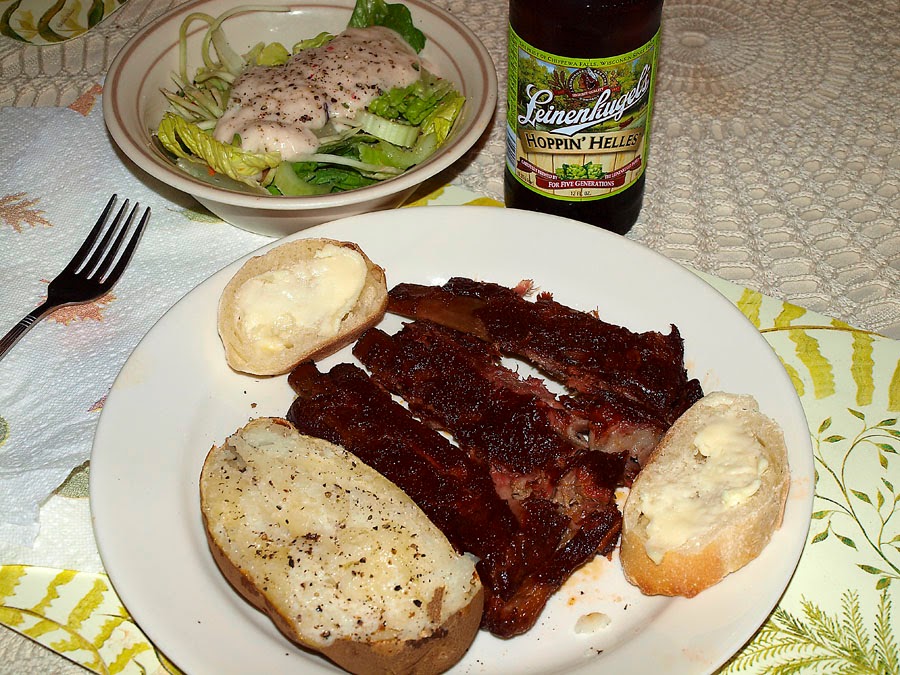