I did this back in June and never got it posted here. I posted it on Let’s Talk BBG forum and thought some of you out there may be interested. I just did a Wapak 8 inch old hollow ware skillet and will post it also the next couple of days.

This is just my take on trying grape seed oil for the first time to season cast iron. I read a link to Sheryl Canter’s post using flax seed oil that was posted on lets Talk BBQ forum. Her method sounded good and the photos of some she did looked great

I set out to find flax seed oil since I wanted to try it. I could not find it; I finally checked a health food store and the lady said she could order it for me. She said it didn’t have a long shelf life so she didn’t carry it. It is also expensive at a dollar or more US per ounce.

I did some more research and decided I would try grape seed oil, the 16 oz. can I just bought was $5 at Krogers. It is good for two years and it has a smoke point of 420 deg. F.

In the old days lard was used to season cast iron and still works well. That is what I used on my first skillet. Some of the oils that are good to use are safflower oil, canola oil and vegetable oil. If you have a method you are happy with and it works for you stay with it. The main thing is to get a season that will last awhile and give you a non-stick skillet to use.

I don’t care for Pam canola spray; it gives a fast build up for me. I have been using vegetable oil. I clean my cast iron with hot water and a brush and sometimes use a scotch non-abrasive pad on them. At times when the seasoning starts to get a little dull looking I will put a light coat of oil on; set on a high burner and as soon as it starts to smoke set it off to cool down.

I had the perfect skillet to try grape seed oil on, a 12 inch marked 12 SK Made in the USA. I don’t remember where I bought it but I suspect it is a Lodge. I used it a few times outdoors on a gas burner. I gave it to a good neighbor friend to use and his son-in –law used it camping. After the neighbor died his wife gave the skillet back to me.

It was a mess and I scoured on it and got it down to bare metal. It had a large brown spot in the middle from gas flames that didn’t come off. I re-seasoned it a couple of times on the gas burner using Pam I think. At least this would keep it from rusting. It has hung in my shed a few years. I decided to use the grape seed oil and use it this summer.

I decided to run it through my self-cleaning oven to get all the seasoning off. While I was doing it I did the neighbors stoneware dish too and it came out looking like new. The skillet was really clean; it even took the brown burn spot out. If I had been smart enough to use the oven the first time I cleaned it I would have saved a lot of rubbing!

I am using Sheryl’s heating method to do my skillet, 6 thin coats, place in the oven and heat to 485 deg. F. for an hour then shut off and let cool. Why 485 deg.; not sure it just sounded good to me. I have had good results doing them at 350 deg. before.

I did the six seasonings in the oven and it got better with each seasoning. It ended up with a nice black color. Later I found the lid in my shed I didn’t remember having so I cleaned and re-seasoned it too. I have cooked with it several times now and it is non-stick and cleans up nice.

I am pretty well sold on seasoning at 485 to 500 deg. for an hour then turning the oven off and let cool. Wait at least 12 hours between each seasoning. Repeat this six times and you will have a great non-stick finish. I think this would work with any good oil, and you want a very thin coat applied. Do this by applying the oil and then wipe it all off; it will still have a thin coat.

The lid for the Lodge 12 inch was done later. I didn’t remember having it but found it in my shed and ran it in the self-cleaning oven and re-seasoned it too.

Before the self-cleaning oven 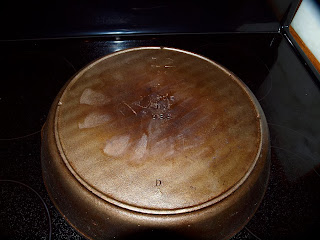 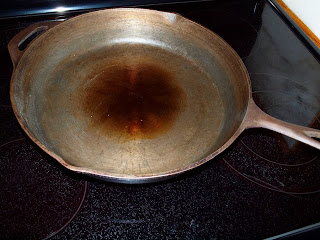 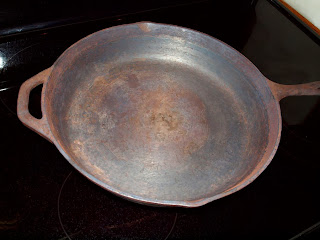 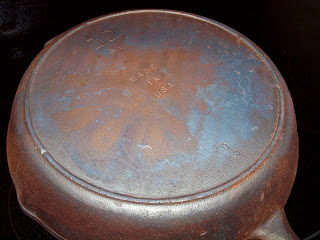 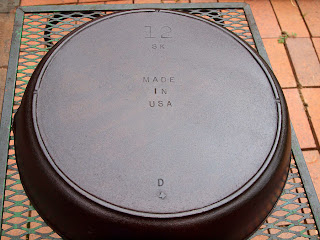 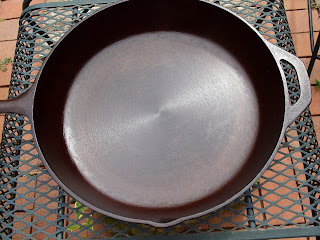 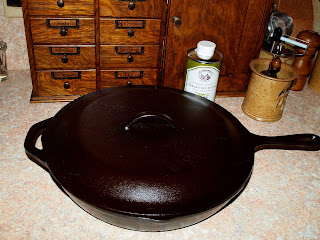