After a few cool days & night freezes we had a nice day today, 60 deg. It was a great day to be out cooking. My son loves chicken wings so I would make Smokestack’s wings. I made them for the first time back in January & thought they were the best I have ever done. I had found the recipe at Saveur.com.

The restaurant first opened in 1957 under the name of Smokestack BBQ, in St Louis, MO. Now their name is Fiorella’s Jackstack BBQ. If I ever get to St Louis I will have to eat there to see if my wings are as good as theirs.

I bought a tube of Yoder’s mush to have with the wings, mainly for the ease of preparing. I could do it on the smoker along with the wings. For a side I would fix my heart salad, a salad I made up awhile back of hearts of palm & artichokes, black olives, onions and bell peppers.

I made the salad early so it would have a chance to marinade. I cut an onion in half then sliced fairly thin; sautéed in 3 or 4 TBS olive oil. I take the onions just until they are starting to brown then I add the chopped garlic, stir a minute then add the bell peppers. I cook them a couple of minutes then set aside to cool some. I used red, green, & yellow peppers to give some nice color, about equal to one pepper. I slice them ¼ inch thick then in one inch pieces. I placed the canned ingredients in a bowl, added the onion pepper mix, the rice vinegar and seasonings. I placed in the fridge until supper time.

I get most all my chicken from a local grocery, Miller Bros. Amish chicken. It is pretty much organic & always cleaned well. I cut the wing tips off. I mixed all the spices and coated the wings, then in the fridge. The recipe calls for 4 hours but I didn’t get started early enough so 2 hours would have to do.

I had some time to relax & wanted to be at the bus stop to greet my grandson at 3:00. This was his second day in the first grade here in Wapakoneta. His mother took him yesterday but tonight he would ride the bus home. He gets off just two blocks away.

A little after 4:00 I got the smoker going & preheated to 225 deg. I got my 16 wings on at 4:30. Then I sliced the mush ¼ inch thick & got it on the top rack. I set my salad out to get to room temp and mixed up the hot sauce, butter, & Old Bay seasoning for the wings. I only used ¼ cup butter & ¼ cup hot sauce and 1 heaping tsp. seasoning since I was only doing half the wings for the son & me. My wife & grandson didn’t want the heat. My daughter-in-law is mostly vegetarian so didn’t want any wings, she ate the mush & my heart salad over some romaine mix.

At 5:30 I went to 300 deg, tossed half the wings in the sauce & back on the grill then brushed a little butter on the mush. I think most toss the wings in the sauce at the end then serve; but by tossing them and then back on the grill you get the benefit of the sauce but are not as messy eating. I did use smoked paprika in place of the sweet called for in the recipe. My cook method was 1 hour at 225 deg; add the sauce, then another 20 to 25 min at 300deg.

Everyone enjoyed the meal. My son said he thought they were the best wings he has ever had. He has eaten in some good wing places in Cincinnati, OH, Charlotte, N.C., and Las Vegas Nevada. 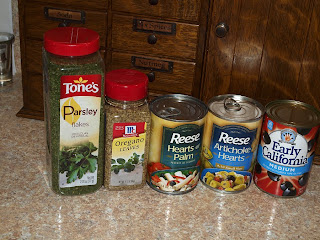 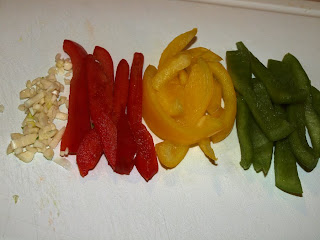 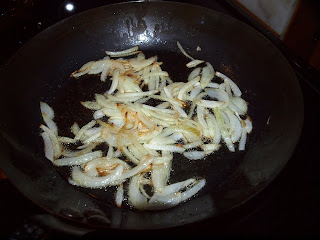 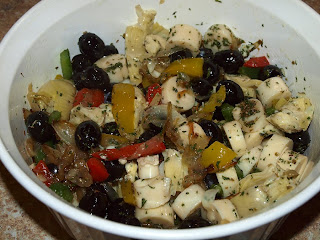 Ingredients for the Wings 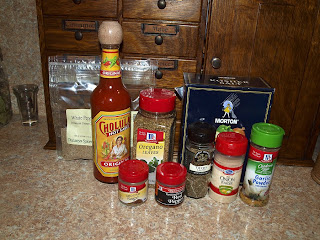 One package of Wings 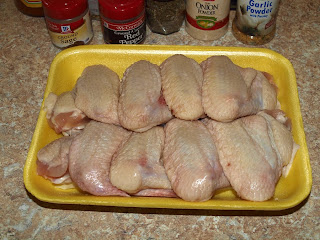 Wings & Mush on the Smoker 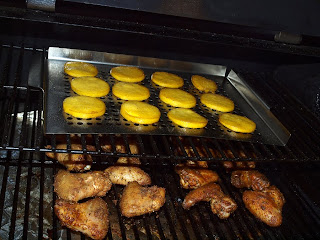 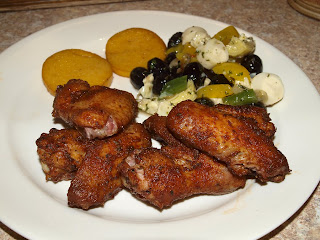 Smokin Don
Posted by Smokin Don at 2:58 AM