It’s been pretty busy here lately! My son, wife, and the grandson have moved in. Oh their family dog too! They will be with us at least until the grandson finishes school here. The last two days we have been busy unloading a semi-trailer that came from Las Vegas. Being 70 I am not much help, but make a good supervisor!

So now instead of just the wife & me there are 5 of us plus 2 dogs! Tonight’s supper was Italian beef sandwiches. I had enough frozen from some I did on the smoker. I thawed it in the micro wave then heated in a Crock pot. For the bread I baked two loaves of Ecce Panis take home & bake ciabatta bread. My side would be some store bought potato salad, not too exciting, but easy to prepare! I had some celery salt, dill weed & pepper on mine for a little better taste. I caramelized some onions & red & green peppers to add to the sandwich.

I fixed the grandson his plate then we all fended for ourselves. My son added some provolone cheese to his sandwich. He & the grandson had some of the au jus to dip in. I had some of the beef over the bread, added onions & peppers then dipped the top half of the bread in the au jus. The grandson said “good sandwich Grampa”, I guess I did well for leftovers and a fast easy meal. 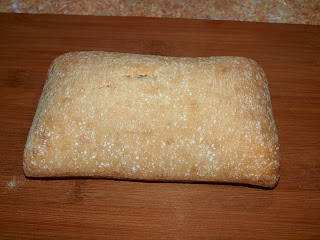 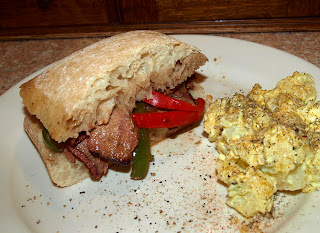 Smokin Don
Posted by Smokin Don at 2:43 AM