Ham, one of my favorite meats! The tastiest is a whole bone in smoked ham, but that’s a lot of meat. It’s been a long time since I have fixed an old fashioned salt or sugar cured ham. I get my best ham now from my local butcher Kahs Meats. He does them whole bone in or boneless and they are good. They are about as close to an old fashioned ham you can get, not much water added during the cure. They only need cooked to heat up, if you over do them you can dry them out. I fix them for a meal & my sides are usually some good potatoes or sweet potatoes and scalloped corn. Leftovers make good sandwiches and ham salad.

Kahs takes orders for Easter hams but I went in at the last minute & Chris fixed me up with a 4 ½ pound hunk of boneless, plenty for the wife & me and some leftovers. My son & family went to his wife’s family for Easter day, they will be home tomorrow & the ham will be some good sandwiches for through the week. I made a glaze from about ¼ cup of molasses, 2 TBS. of honey, 2 TBS red wine vinegar, and a heaping tsp. of Grey Poupon course ground mustard.

I tented the ham with foil to rest while I fixed the sauce & Bob Evans mashed sweet potatoes. My scalloped corn was done in the oven. I strained the fat from the pan juices, added what glaze was left & some corn starch to thicken for my sauce.

I plated it up for the wife & me with some sauce over the ham. The cook got the end piece! It was pretty tasty & I didn’t dry out the ham. A slice of ciabatta bread was good with it. 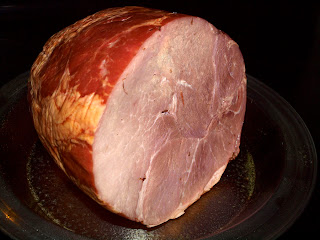 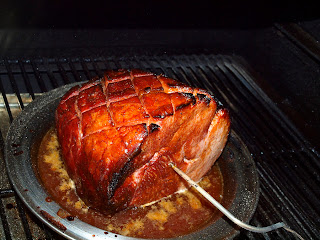 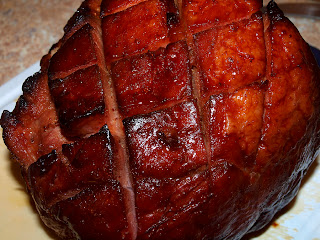 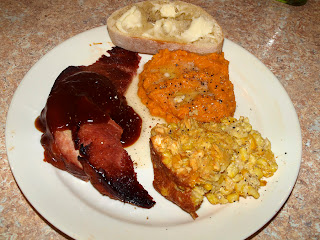 Smokin Don
Posted by Smokin Don at 3:47 AM