Sunday morning I got my pot roast on early in my Crockpot & it would simmer all day for the wife & my supper. At 10:00 AM I put two pounds of pistachios on my smoker to do for two hours & then would start my Ropa Vieja.

Ropa Vieja, “Old Clothes” in Spanish, originated in the Canary Islands. It originally contained leftovers & sometimes potatoes & chick peas. Newer versions are just beef in a sauce. I looked at several recipes and decided on a one from Saveur.com by Kathleen Squires. All the ingredients sounded good to me & I could adapt it to doing on my Smoker. Traditionally it is done with flank steak but I would use a chuck roast.

I seasoned the chuck roast with some steak salt & garlic powder. As soon as my pistachios were done at 12:00 noon I put the roast on the smoker at 175 deg. to smoke for about an hour. While it was smoking I got the sauce started on the stove top using my Lodge cast iron chicken fryer. The recipe called for some bacon but I left it out, sautéed my onions in 2 TBS of bacon grease, added the garlic & peppers and simmered a few minutes. I added the seasonings & stirred to coat. I added the tomato paste stirred & cooked a minute. Then I added the beef broth & crushed tomatoes, stirred to mix well.I left the sauce simmer while I seared the roast.

At 4:00 I took it to my stove top, removed the roast, it was falling apart. While it was cooling some I added the final ingredients, olives, capers and vinegar. I removed the fat & shredded the meat. I skimmed off some of the fat from the sauce. I added the meat back to the pot & simmered until reduced some and started to thicken. I did a taste test & this is delicious!

After cooling it went in the fridge & will taste great with some black beans and yellow rice later this week. 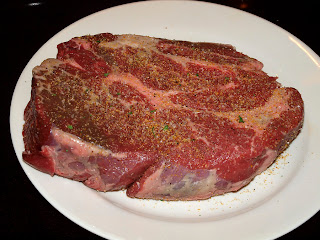 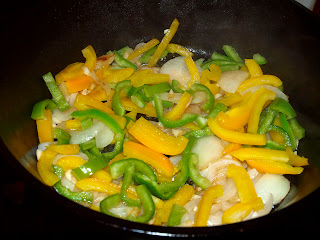 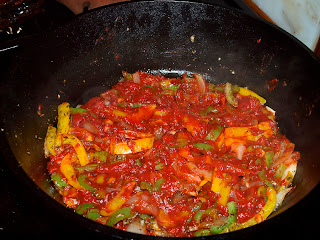 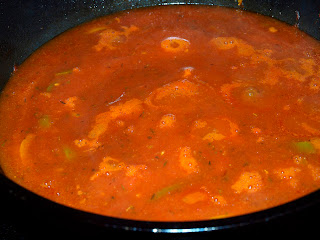 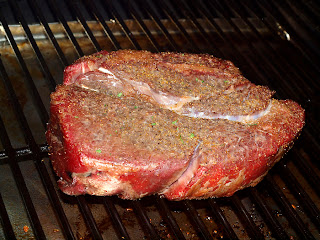 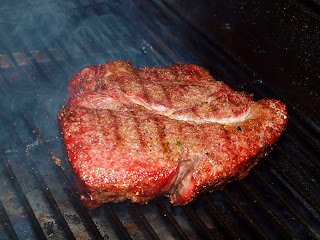 Roast added to the pot 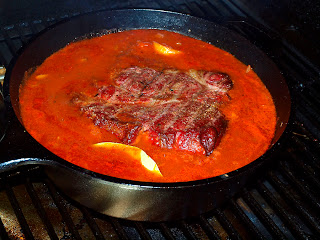 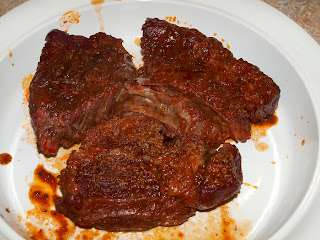 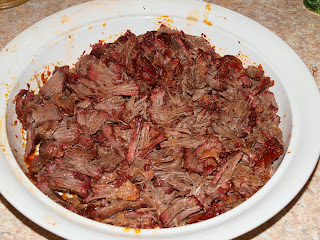 All in the pot & reducing down 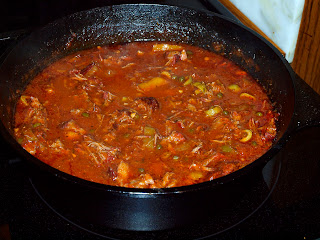 Smokin Don
Posted by Smokin Don at 5:04 AM