My wife’s trip back from St. Charles, Il did not go as planned. Sat. morning our daughter took her to catch the train into Chicago where she was to get on a bus non stop to Toledo & I would be there to pick her up. The train was late & she missed the bus, so took a cab to the airport. Earliest flight was at 4:45 pm to Dayton, arrive at 6:45. She had flown there for $100 & the bus was $40. The airlines scalped her cost her $360 for the flight since it was same day + charged her $30 to print the ticket, said since it was late, she was checking in 6 hrs before the flight! She arrived on time but had to wait an hour to get her bag, it didn’t come out with the others. She checked at the desk & said it was coming on a later flight, but they checked & it was in the back room. Oh well I got her back home & getting back to normal now!

For Sundays cook I decided to do my unskewered sirloin & veggie kabobs. I always had trouble keeping all the food on skewers when turning or some pieces refused to turn.
I find it much easier to just do them in my Pampered Chef grill basket, the one my wife bought me. I made fun of it at first saying I’ll probably never use it, it will be too hard to clean. Now I use it a lot! I would serve them over rice, Zatarain’s New Orleans style yellow rice. I would also do a couple of grilled peaches to serve alongside.
After lunch I cut up the sirloin & veggies, made the marinade, & got them in the fridge.
I used ½ stick of butter, 1 heaping Tbs brown sugar, & ¼ heaping tsp cinnamon, melted in the microwave & stirred, I would put this on the peaches after turning.
Just before time to start the kabobs, I got the smoker fired up & set to 325 deg, this would give me about 350 deg grill temp. Usually kabobs are done over direct flame, but the Traeger is indirect heat so I decided to do them slower for 30 min, turning & basting halfway thru, this method suits an old cook better than hot & fast! The peaches I would do cut side down for 10 min. turn & add butter mix, and do another 10 min. I got my rice on simmering & all came together pretty good. Wife & I both liked it. The sirloin was melt in your mouth, veggies tender crisp & the marinade added great flavor. The peaches went well with it. I used white peaches & would have been better if they had been riper, but still pretty tasty. 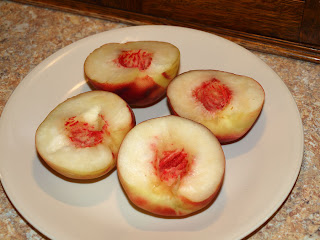 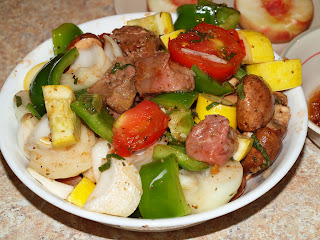 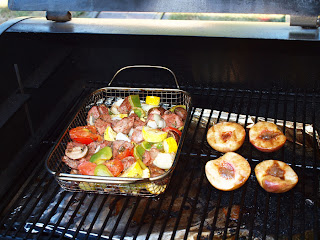 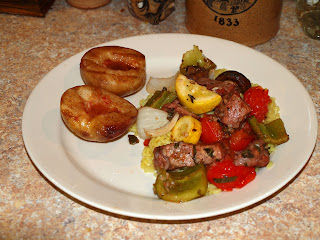 Smokin Don
Posted by Smokin Don at 9:26 AM