Yesterday was another hot & humid day, with a heat index of 100 deg. I had a chicken in brining overnight I would smoke. The raccoons had been in my tomatoes again so I put a small fence around them to try to deter them. In spite of the heat I had some other chores I needed to do. My extension ladder has been lying out since I worked on my spouting a few weeks ago. I had a section of spouting that still needed cleaned so I did that, got a live trap out of my shed & put the ladder away. I am going to catch those pesky raccoons & get rid of them. My neighbor is away this week so had her flowers to water.

The chicken I had spatchcocked, cut out the back bone, my favorite way to do chicken. Laid flat on the grill they cook more even. I have done them without brining & they are pretty good but brining lets it stay moister. I do them at 300 deg until IT of 160 deg. then up to high to finish to 175 deg IT, & brown up the skin. I baste with the garlic butter after ½ hr. & again when I go to high. They are done in just over an hour so you don’t get much smoke taste. Smoking them for any length of time usually dries them out & the skin is rubbery. We discussed, on the pelletheads forum about using liquid smoke or smoked paprika to get a smoky taste. Even though liquid smoke is made naturally I agreed with most that it tastes artificial. I do like the smoked paprika & starting to use it on meats more often. I decided to try the liquid smoke in the brine. Colgin, a maker of liquid smoke has a recipe on their site that calls for 1 TBS per gallon of brine. I made my usual mild brine, ½ cup kosher salt, & ½ cup brown sugar per gallon. I went easy on the liquid smoke, 1 tsp. A gallon was enough for my 1 chicken, & I brined it for 12 hrs. At 1:00 pm I removed it from the brine, rinsed & dried well & in the fridge for 2 hrs. to dry. I used ½ stick of butter & 1 Tbs. garlic granules & melted to rub on the chicken & baste later. At 4 pm I added the garlic butter under the breast skin & rubbed all over. Seasoned with Lawry’s seasoning salt, no MSG. I had a bunch of asparagus, marinated for an hour with olive oil, white balsamic vinegar, salt, & pepper. I used some hi heat silicone rubber bands to secure individual bundles for the wife & I. I would add near the end of the cook. The rubber bands worked well & made them easy to turn. I also cooked some fettuccini & added some Kraft’s Philly cooking sauce, savory garlic flavor. All was very tasty. I could only taste a tad from the liquid smoke so next time will try 2 tsp. I was tired so didn’t take as many photos as I usually do & some didn’t turn out that great & even forgot to take one of it on the grill. I usually dish up my wife’s dish first the take a photo of my plate, but she always gets a breast, it looked purdier so used her plate for the photo. I like the leg & thigh better. 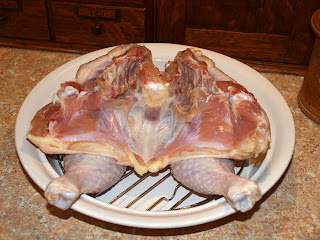 Brined, seasoned, & ready for the grill 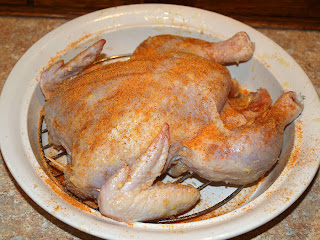 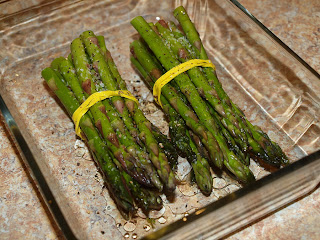 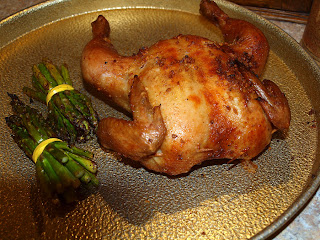 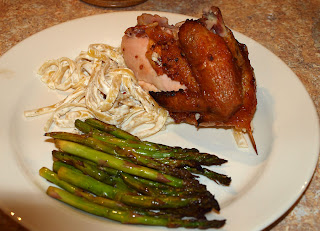 Smokin Don
Posted by Smokin Don at 9:41 AM