Our 45th Anniversary was just Mom & Me, no parties just a celebration together. We treated ourselves to some fine eatin over the week-end. Friday evening we had 3 of our favorites, BLT’s, fried green tomatoes, & fried squash blossoms. On our anniversary Saturday we went to Red Lobster & had lobster tails. Today we had a shrimp boil. Fresh corn is about done for the year so Sat. I bought 2 doz. Ears. Since I had the pot out to do the shrimp I would first do up all but 4 ears & the wife cut it from the cob & bagged to freeze for later in the winter.
Seafood boils are popular in all the coastal states, New England have their clam bakes, Maryland have their crab boils, South Carolina & Georgia have their Low Country boils, Louisiana have their Crawfish boils, Wisconsin have their fish boils. Most include, sausage, potatoes, & onions. I would do mine with cabbage for the first time & it was a good addition. I guess you could call this Don’s Ohio Shrimp Boil! My gas cooker & turkey fryer pot w/basket is ideal for doing this. I seasoned a pot of water with, salt, Old Bay seasoning, Zataraines shrimp boil, & a few shakes of Cholula hot sauce. Cut a small head of cabbage into wedges, leaving the core in to hold it together, added that to the boiling water for 45 min. After the cabbage was on about 15 min. I threw in a slice of bacon. Then added the red potatoes, sausage, onions & garlic for another 20 min. added the corn for another 5 min. then the shrimp for the last 5 min. Served with some crusty bread & butter for the taters. This was plenty for the wife & I, a meal for my Mother, & left overs for tomorrow night. Now let me tell you this is some fine eatin & my recipe would be plenty for 4 people.

Ready to do the corn 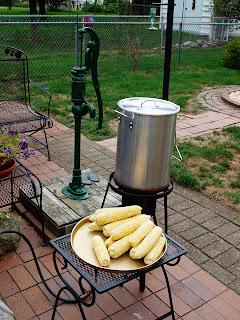 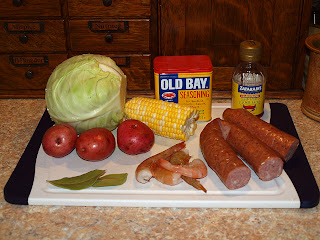 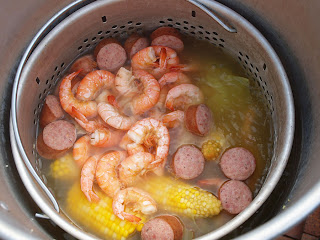 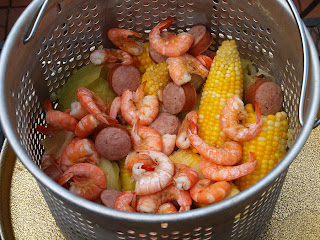 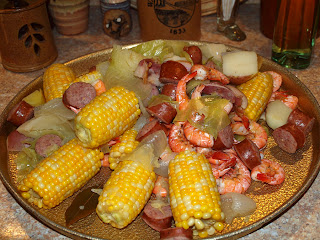 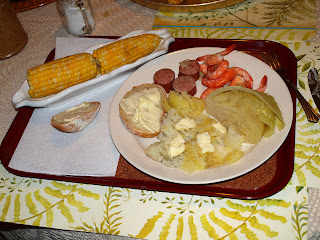