I have been spending time at Cowgirl’s Country Life, blog, looking at all of Jeanie’s cooks. Now that gal had my mouth watering for some gravy! I do not make gravy well, even though I love it. My Mother-in-law used to make gravy for me, she was a great cook. I like it over bread and potatoes. I bought some nice pieces of sirloin to make baked steak on my Traeger. My Mother used to make baked steak; she browned up sirloin or round steak, with salt, pepper, & flour. Then in a casserole & topped with mushroom soup & in a 350 deg oven for an hour. Now Jeanie would have made her own gravy, but when you get old you use shortcuts. My gravy would be a can of Campbell’s mushroom, & a can of beefy mushroom soup mixed together, w/a little Gravy Master for color. I also wanted to try Jeanie’s baked potatoes, w/a slice of bacon & onion in the center & wrapped in foil. I would add carrots & onions to the sirloin & gravy.
I figured to cook all at 300 deg. on my Traeger & would do the potatoes for a half hour then add the skillet of steak & gravy for two more hrs.

When I started at 3:00 there were dark clouds in the NW so checked the radar & a front would come thru so it was a rush to move the smoker to my garage. I had rigged up a section of flexible dryer vent to add to the stack & vent the smoke outdoors. A step stool would hold the vent in place. We use the garage for storage & don’t want smoke smell all over. As soon as I get my covered deck built I won’t need this anymore. I prepared my potatoes & got them on about 3:30. I mixed my two cans of soup & browned up the sirloin. I added ½ the soup to a cast iron skillet & added the sirloin. Deglazed the other skillet & added some chopped onion to cook a few min. Added carrots to the meat then poured the onions & liquid over the meat. I then added the rest of the soup & some garlic granules over top. The skillet went on the smoker at 4:00 & I covered it with foil. All went well, the front went thru with a downpour of 8 tenths in about an hour for some much needed rain. All was ready at 6:00 the food was great, I had some of the gravy over my potato & a piece of bun for gravy bread. My hunger for gravy was satisfied, for awhile anyway! 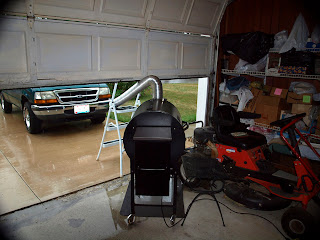 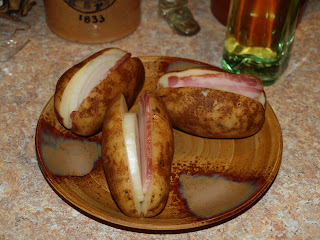 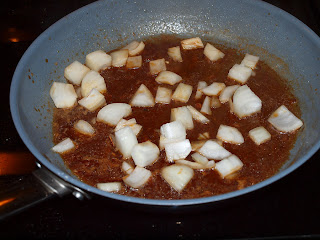 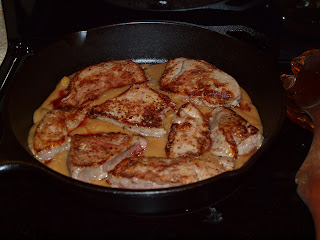 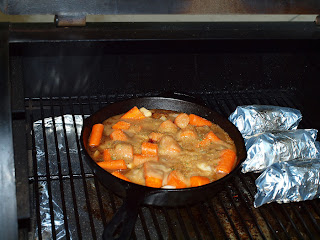 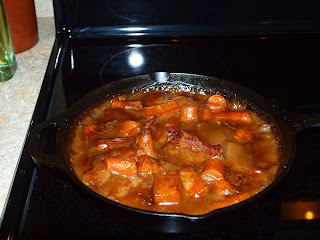 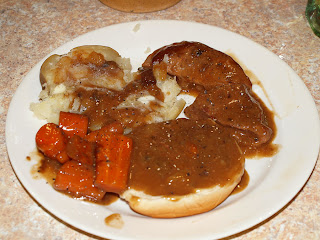 Smokin Don
Posted by Smokin Don at 3:19 AM