Yesterday was a busy day for me, trimming & mowing grass plus smoking my English roast for pulled beef. Early I went to the grocery to get ingredients for my corn pudding. I had seen a recipe somewhere of cheesy corn pudding that also had tomatoes on the top. I did not save it & could not find it so I had to wing it & make my own. I had a yellow squash & some tomatoes from my garden to use in it. I also needed more pellets so stopped by my butchers to get some. He told me the roast I had bought came from the Grand Champion Steer of the Auglaize Co. Fair a week earlier. He had put the pressure on; I would have to do this beef with honor!
I would do this roast like Italian beef, but I didn’t follow any recipe. I decided to put some goodies in the center & fold over and tie. I seasoned half with, salt, pepper, oregano, chopped Vidalia onions, 4 cloves of garlic, & pepperoncinni peppers, folded & tied. Seasoned the outside w/salt, pepper, & oregano. I got it on my smoker, direct on the grates, at 10:30 on the smoke mode, 170-180 deg. I started my mowing grass. I did it on smoke for 3 hrs then went to 225 deg. In 4 hrs it was 165 deg IT, time to place in a roaster & foil pan. To the roaster pan I added thick sliced onions to place the roast on, a green pepper & a yellow banana pepper around the roast. I added 2 tsp. of better than beef bullion & a quart of beef stock, covered pan w/foil & went to 250 deg. I kept edging up the temp setting to 300 deg near the end. At 5:00 it was up to 200 deg so I pulled it, foiled & into a 180 deg preheated oven to rest. Total cook time was 6 ½ hrs.
I pulled the beef & munched on the rib bones, sure was good. I had done the Grand Champion honor! It had good bark, some smoke ring, & was tender.
I then proceeded to sauté the yellow squash & onions, added to a casserole, mixed up the corn & cheese, added over the squash, then sliced some tomatoes to cover the top. I got this on the smoker at 325 deg. along w/some baby yellow potatoes at 5:50.
The corn & potatoes were done at 6:50. I served the beef on an onion, poppy seed ciabata, bun along w/some Au Jus, onions & peppers over top of the beef. My corn, & a smashed potato, w/butter on the side. I dipped my top half of the bun in the Au Jus for a tasty sandwich. 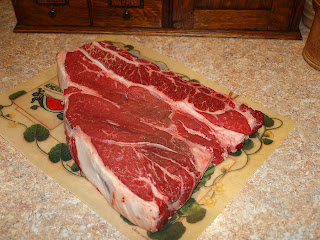 Goodies in the middle 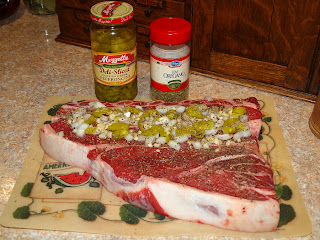 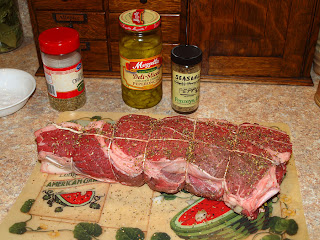 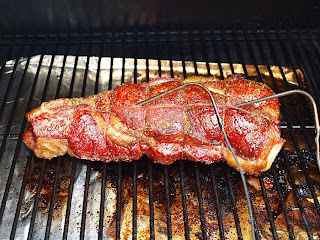 Ready for beef stock & back on the smoker 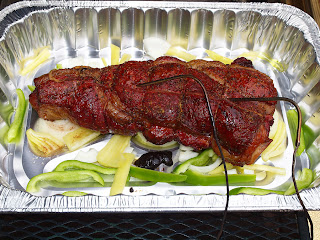 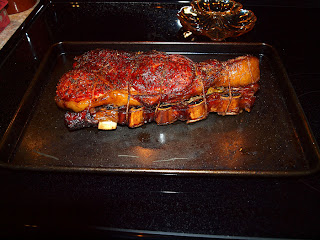 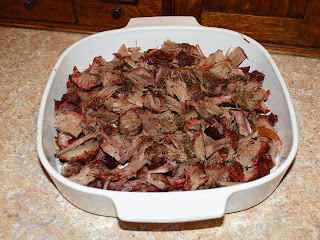 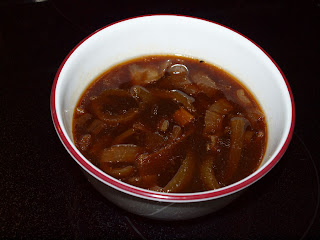 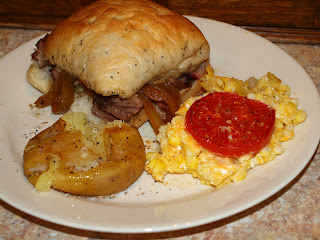 Squash & onions for the corn pudding 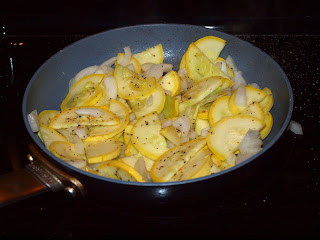 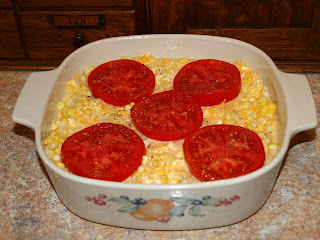 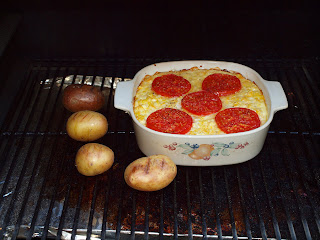 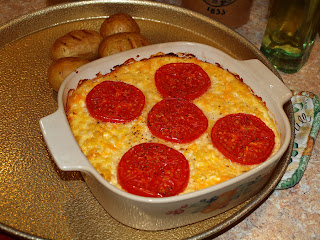