I turned 74 yesterday but when I got my new Lodge Sportsman L410 Hibachi grill today I was like e little kid with a new toy. I don’t feel too well, have a cold; but that didn’t stop me from getting it assembled and in the oven for a seasoning before using.

That cast iron grill is a piece of artwork; just 6 pieces plus the bail and only needs two bolts to assemble.
I could not find much history on this grill but it looks like Lodge Bought out Sportsman. I did find a video of someone who had an original Sportsman and compared the Lodge to it. The casting is a lot cleaner and they improved the pockets where the cooking grate legs set.

I run hot water over the cooking grate, brushed it well and dried. I then brushed lard on the inside, the two grates, the access door and damper. It was set on a sheet pan and into the oven. I set it at 350 deg. and a half hour later turned the oven off. It will set there until cooled. I had wanted to do the outside too but it was too hard to handle on top of my cupboard. I will coat the outside on my first cook.

Now all I need is some decent weather to try this thing out. I plan on doing some pork burgers, sausage, for my first cook. 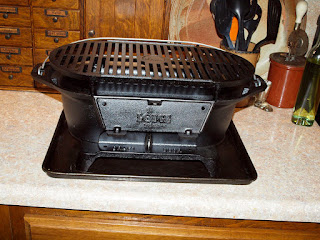 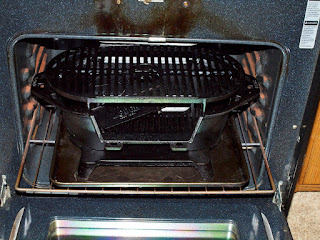