I don't eat much for breakfast anymore. I usually just have coffee and sometimes toast. I do get hungry for bacon and eggs so I have that once in a while. My favorite is bacon, eggs, grits and toast or once in a while I want some ham, eggs, grits, red eye gravy and toast. When I fix it most of the time it is for brunch.

I do like sausage gravy over biscuits and that is our daughters favorite; we would get that a lot when eating out for breakfast. Since she is with us now I asked if she wanted it for our Saturday suppper and she said yes.

I had some Grands Southern Style biscuits,a pound of Kah Meats sausage and eggs so I was all set. I thought some fried potatoes sounded good too so I baked 3 medium potatoes in the micro wave and cooled in the fridge. I cut them in a small dice to fry in some olive oil and ghee and kept warm in a 205 deg. oven until all was done and ready to serve.

I got the potatoes on and the dausage to brown up. When the sausage was done I drained the grease in a collander deglazed the skillet with a little chicken broth then added the sausage back. I had water on heating for the Pioneer Country gravy and when that thickened up I added it to the sausage.

So my breakfast for supper was a hit; all liked it! 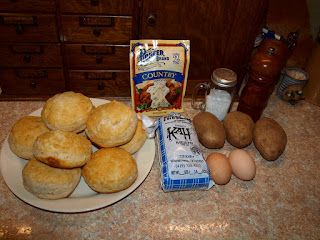 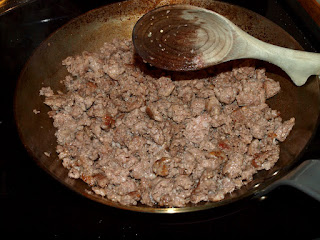 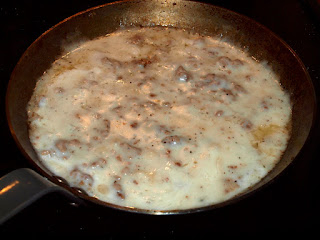 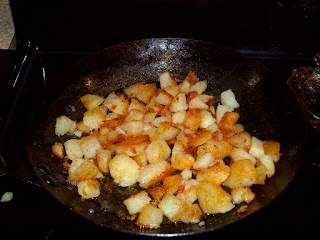 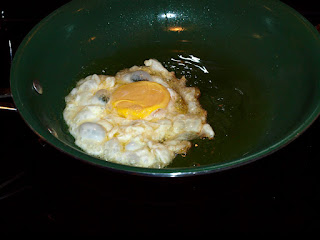 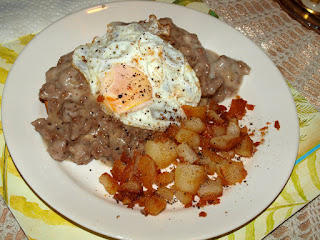