This was our 50th valentines day together. I never have made a big to do about valentines day; when I was growing up it was a holiday mostly for kids. She knows she is my sweetheart! I usually buy her some candy and try to fix her a good meal. I was at the grocery today and meant to buy her some candy but forgot. I told her my supper was her valemtines gift!

I had some nice sea scallops thawed out and would have some spaghetti with some sauce she got me for a Christmas present. She got me 4 jars of different Ilventos sauce; it is a restaurant in N.J. The sauce is made in small batches, hand canned and labled. I wanted to use their Arrabbiata sauce, said it was their spiciest. I had her taste it; if it was too spicy I had a jar of their marinara sauce I could use. She said it was good. Their sauce is pretty darn good of the three I have had.

I had made brown butter I wanted to fry the scallops in and spaghetti for the pasta. I baked a take home and bake baguette for some bread and butter.

When my pasta was about done I had a skillet heated to med. high with 3 Tbs. of brown butter. I did 4 scallops for the wife about 3 minutes per side and served her. I kept the pasta warm In the oven and did 4 scallops for our daughter and added some capers at the end. After I served her I made mine up with some capers too. I think next time I would just add the capers to the plate to get more of their sour flavor. The scallops were served with some of the butter spooned over.

That was a pretty tasty meal and we all loved it. The Ilventos sauce was good. Their arrabbiata was the favorite I have had and I would love to eat at their restaurant too. 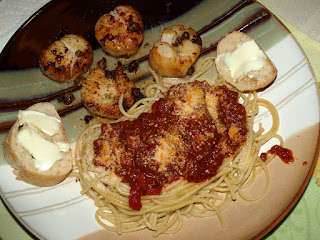 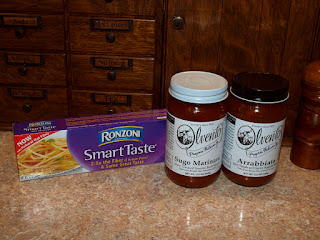 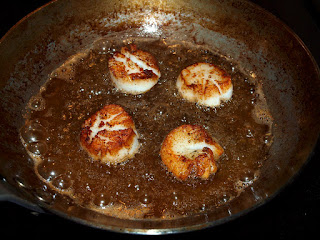