Tonight’s supper included tastes from Western and Eastern North Carolina, Old Dave’s mac n cheese from Indiana and Billy’s slaw from Eastern N.C. and the cook is from Ohio! Today was unusually warm, 74 deg., for Nov. Dave and Billy are fellow LTBBQ members. I had fun being out and cooking.

I made up Billy’s slaw this morning. Billy (Savannah Stoker Controller); I am pretty sure the slaw recipe is his version of the slaw served at the Skylight Inn, Ayden N. C. I will see if he will post the recipe or if it’s OK I will.

I did the Lexington pulled pork yesterday and was anxious to try some sliders with it. I had some whole wheat slider buns to use.

I sliced some jowl bacon for over the mac n cheese and wanted some for a slider. I got some on and then got the mac n cheese on the top shelf of my Traeger. It took about an hour and 15 minutes for both at 325 deg. grill level. My foil pan was too shallow so I didn’t get all the cheese and some of the cream in. I don’t think it was as creamy as Old Dave’s but still pretty good with a great taste. The nice thing about it is you don’t have to cook the pasta first.

The grandson came and was at a neighbors playing. My wife just wanted two sliders with some Kah’s BBQ sauce and bacon on one. I got hers heated in the microwave and served then the grandson came and said he would eat a slider and some mac n cheese so I got him taken care of.

I made myself 3 sliders, one with the Lexington sauce and a slice of bacon, one with just the sauce and one with just some of my Kimchi. I liked all 3 and can’t say which one was the best. Then the daughter in law came and ate some of the mac n cheese and slaw. We all liked the mac n cheese and the DIL liked the slaw as well as me. My wife said she was not crazy about it but she thinks she makes the best slaw! Hers is pretty good! 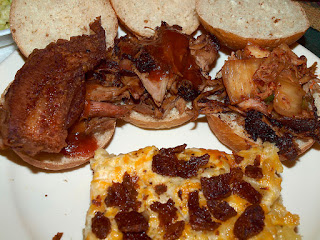 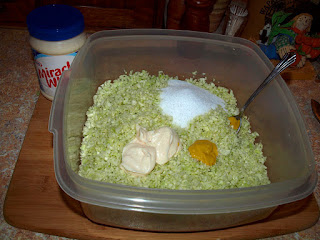 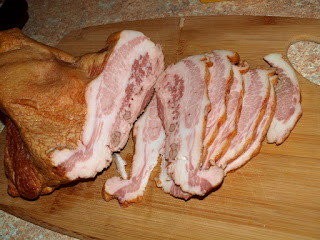 For the Mac n Cheese 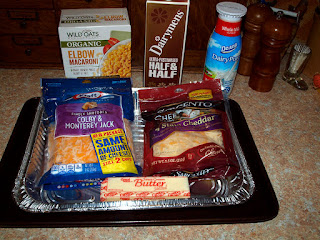 All in the pan 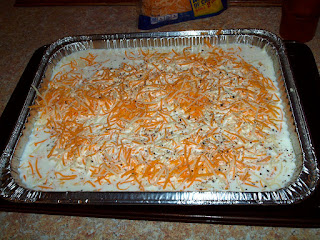 Mac and bacon on the smoker 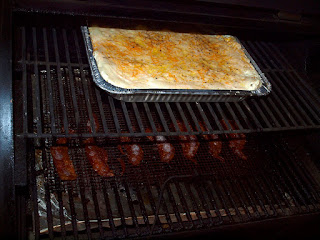 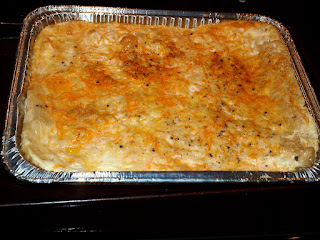 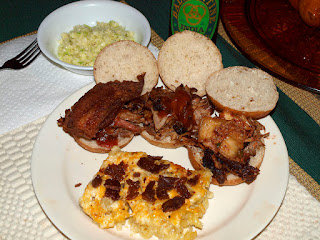