2 Envelope Beef and Carrots over Rice

We have had high winds all day and into tonight. Today they were at 30 mph with gusts at 42 and now they are at 24 with gusts to 30; I hope they have died down more by morning.

I got my beef shoulder roast browned and in the Crockpot by 10 AM. I had a nice small shoulder roast from my butcher Kah Meats. It was thick and had some nice marbling. I like it when they are thick; makes it easy to brown on all sides.

I got the idea for this roast from my friend Mary at Deep South Dish. She makes one with picante sauce poured over and then a 3 envelope mix, onion soup. Brown gravy and Italian dressing mix. I decided to just use a 2 envelope, Pioneer brown gravy and Lipton’s garlic mushroom mix. It turned out being one of my better pot roasts with good gravy. This would be good for working people; get it in the Crockpot in the morning and when you get home cook some rice and you have a great supper. It would be just about as good without browning the meat first.

I browned up the roast seasoned with just some fresh ground pepper; I figured there was enough salt in the mixes. I sprayed the Crockpot with some olive oil, added 3 slices of sweet onion and then the browned roast. I deglazed the skillet and added those goodies. I mixed the envelope of Pioneer brown gravy and Lipton’s garlic mushroom soup with 1 ½ cups of water and added that to the pot. I then added enough lager beer to come ¼ inch from the top of the roast. There were a couple of swallows left for the cook! I added a couple handfuls of small carrots and a stalk of celery to the top of the roast. I set the Crockpot on high for a half hour then went to low.

I fixed our brunch; jowl bacon and French toast in honor of my wife’s birthday and then had time for a nap before supper.

A little after 4 PM I removed the roast to let cool and shred. I shredded it and removed some fat and then back in the pot and set the pot on high. A little after 5 PM I added slurry of 2 tablespoons of flour and some water to thicken the gravy some. I got some Uncle Ben’s white rice cooking in my rice cooker at 5:30. It all was ready about 6:20 so I served the wife and me some beef and carrots over rice and some bread and butter on the side. It was good and I went back for seconds of some of the gravy over bread! 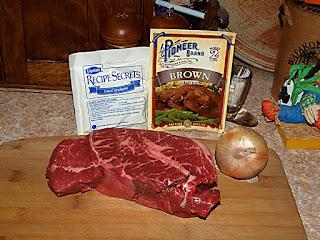 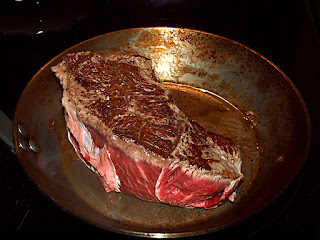 All in the Crockpot 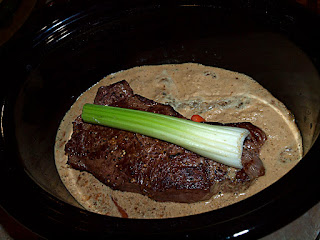 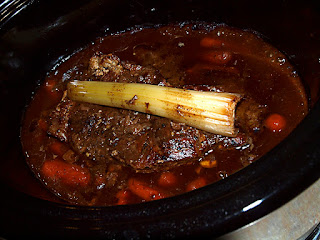 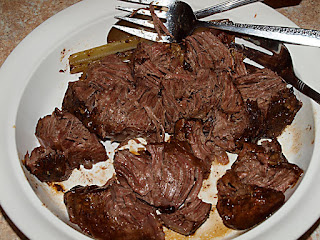 Shredded and back in the pot 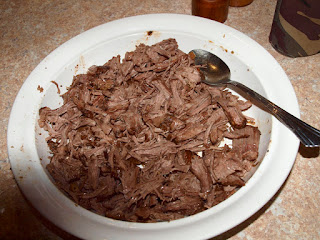 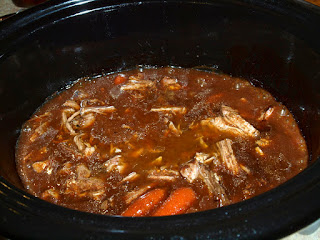 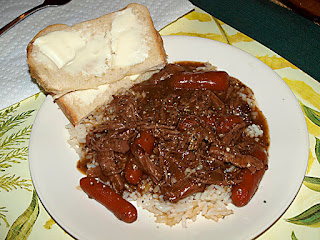 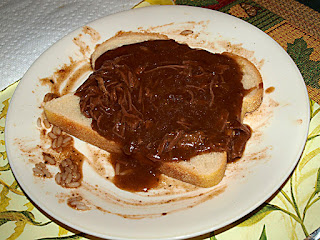