Back to normal November weather here, it was 74 two days ago and only 52 today. We had nice sunshine all day though. I had bought a pound each of ground chuck and sausage; I planned on a meatloaf. Wanting to fix a different meatloaf I thought why not just roll the sausage out as I would for a fatty and stuff it with meatloaf.

After having my bacon and mac slider for lunch I rolled the pound of sausage out in a gallon plastic bag and in the fridge. The meat loaf was:
1 pound of ground chuck
2 slices of onion diced, 3 cloves of garlic minced, 1/3 cup each of small diced carrots and celery; all sautéed in a little olive oil and then cooled
1 egg with 2 Tbs. half and half beaten
¼ cup Heinz chili sauce
7 or 8 saltine crackers crushed
Salt and pepper
I mixed this all together and then stuffed into my fatty stuffer and in the fridge to cool and set up some for a couple of hours. I only used about half of the meatloaf mix so will make patties out of whats left for later.

My sides were hobo packs; onions, potatoes and carrots for my wife and I made mine with some sliced celery added. I topped them with Penzey’s sandwich sprinkle and two pats of butter. All was folded in foil and a hole punched in the top with a toothpick.

Making up the fatty I cut the top out of the plastic bag with the sausage in. I laid 2 slices of American cheese on top in the middle. I extruded the meatloaf from the stuffer on the cheese. I had to cut a ½ inch off so I had an inch of space on each end to fold the ends closed and seal. I folded half the sausage, using the plastic to help, over the meatloaf then peeled off the plastic and then did the same with the other half. I wet my hands with cold water and sealed the seam and folded the ends in. I turned it over seam side down so the cheese would be on top. This went back in the fridge about 45 minutes before cooking. I added some Penzey’s Cajun seasoning to the top before smoking.

I preheated the Traeger to about 200 deg. grill level. I used my frog mat, sprayed it with some olive oil and added the fatty and then added the hobo packs. After 40 minutes I went to 275-280deg. grill level. I left it there for a half hour and having inserted a temp probe in the fatty I went to 300 deg. for the last 15 or so minutes to get the fatty to 160 deg. IT. Total cook time was just over 1 & ½ hours. I learned one thing to not do with a fatty and that is to insert the temp probe from the end; when I pulled it out a lot of liquid and cheese squirted out. The next time I will insert it from the top down to the center.

I served the wife and me both two slices of the fatty and our hobo packs. We both liked it and will do this one again. I had a good Ballantine IPA to wash mine down; the only thing missing was some good bread and butter! 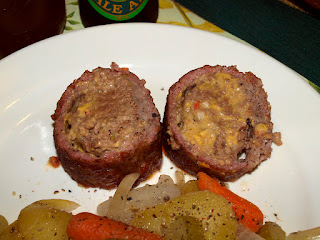 Veggies for the meatloaf 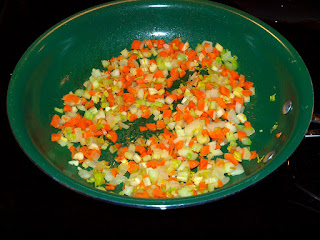 Meatloaf on the sausage and cheese 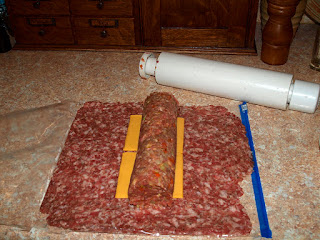 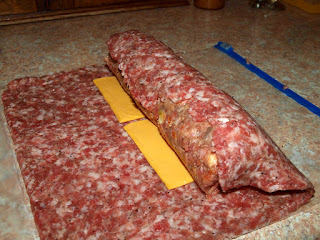 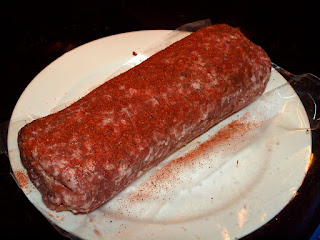 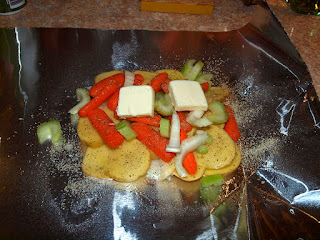 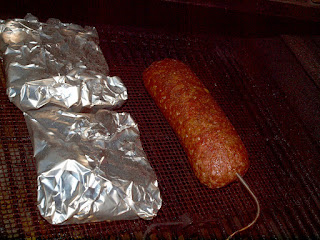 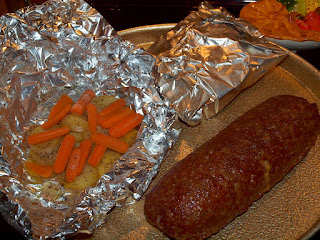 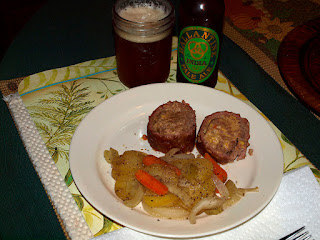