I knew Saturday the wife would be gone most of the day Sunday. I decided to cook some stuff I like that she doesn’t care for. I had a package of my butchers Cajun brats in the freezer so got them out to thaw.

Beans and greens would go with the brats. I had wanted to try some New England style baked beans for a long time. This was a good time to fix them. Most recipes for New England style beans are similar and share the ingredients of molasses, sugar, dry mustard and water as the syrup and made with salt pork and onions. They are cooked low and slow and may vary a little from state to state, Vermont adds some maple syrup.

I had a pound of yellow eyed beans that are a favorite in Maine. I found a recipe for some Maine baked yellow eyed beans. I started before noon since these had to bake about six hours. My beans had soaked overnight so I rinsed them and boiled them in water and ½ tsp. of baking soda. I used some bacon in mine; I have never liked to use salt pork. I mixed up the syrup and got them in the oven at 275 deg. at 12:00.

I checked the beans three times and added some cooking liquid and syrup mix. I took the lid off the last 45 minutes and added what was left of the syrup mix.

For my brats I wrapped 3 of the 4 in some hot capicola and did them on my Traeger at 200 deg. grill level for 45 minutes and then went to 325 deg. for 45 minutes.  For the greens I just used some canned mixed southern style. I browned up some bacon and then added some chopped onions and added hot sauce to perk them up a little.

I had some Dijon mustard for my brat and a Deschutes black butte porter to wash all down. The capicola was not great on the brat, dried too much but was crispy and tasted good. The beans were good, tender and very sweet. After a few bites I added hot sauce that went well with the sweet. If I fix them again I think I would double up on the dry mustard. The greens were so so but they worked, a good supper!

I had a piece of my buttermilk pie after all settled. That topped it off!

Bacon and onion in the bottom 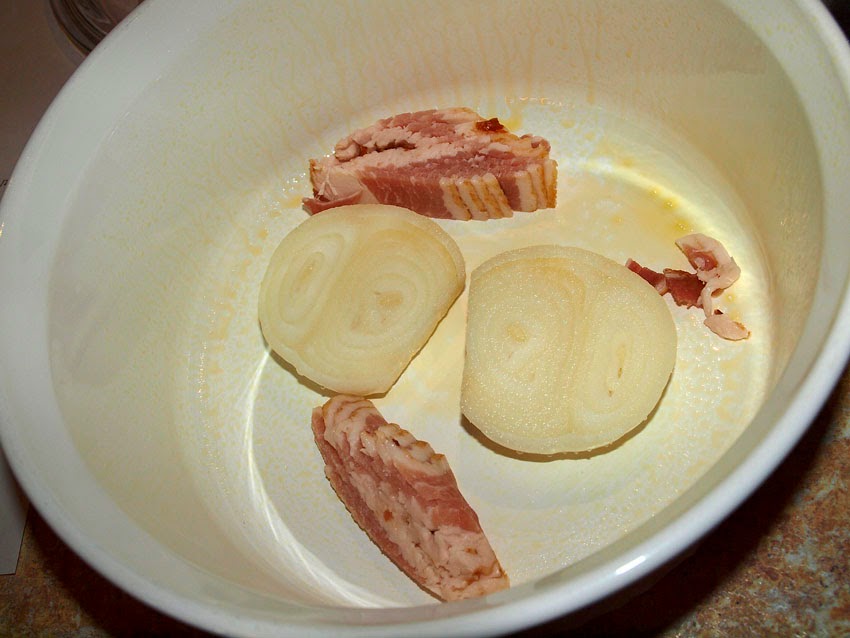 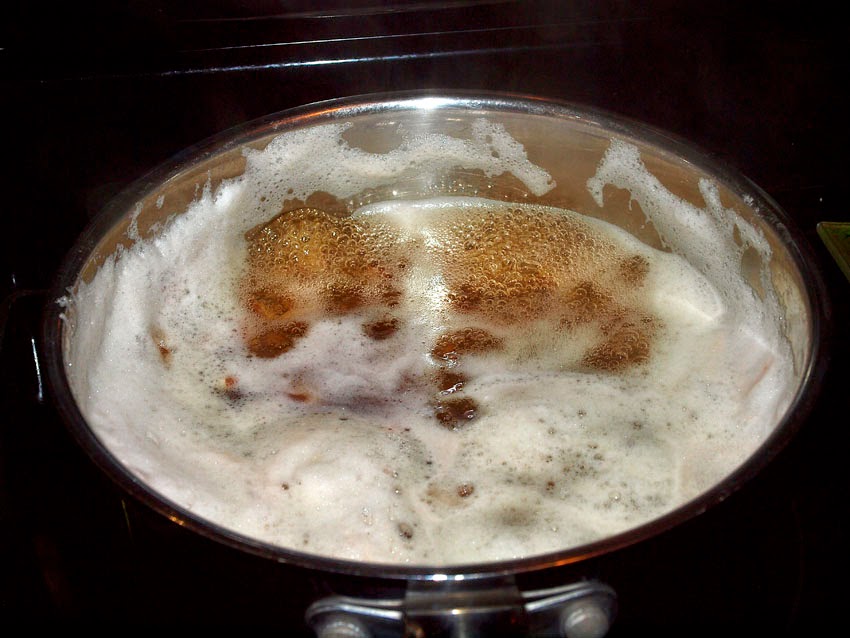 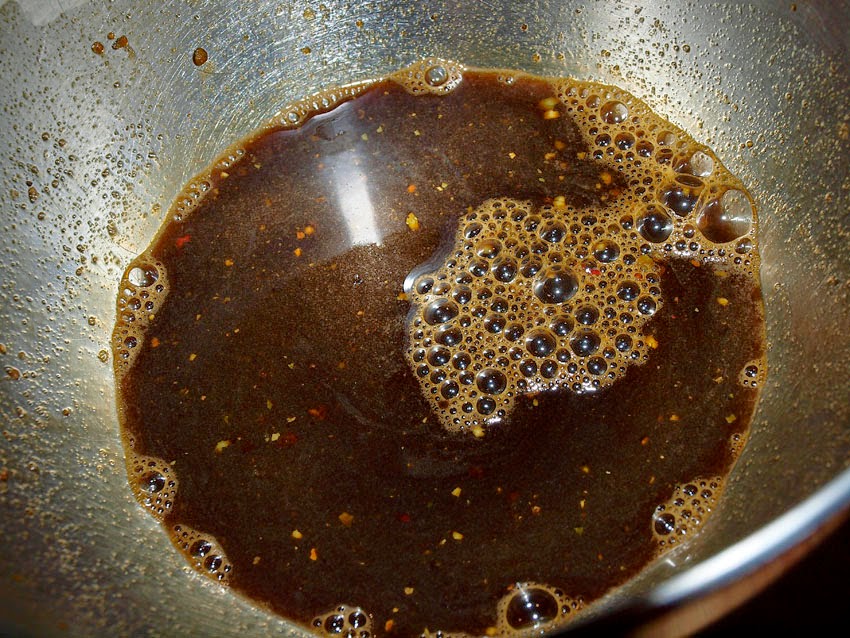 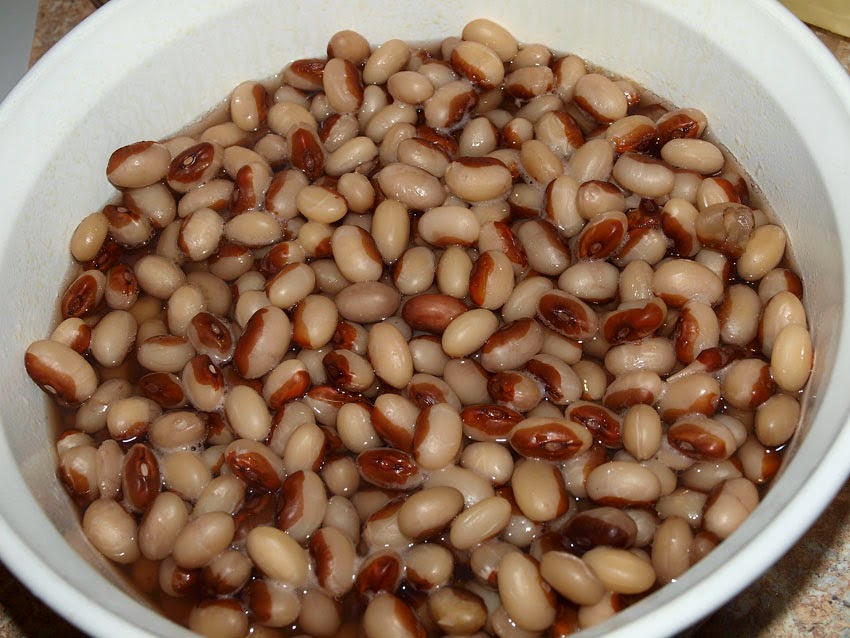 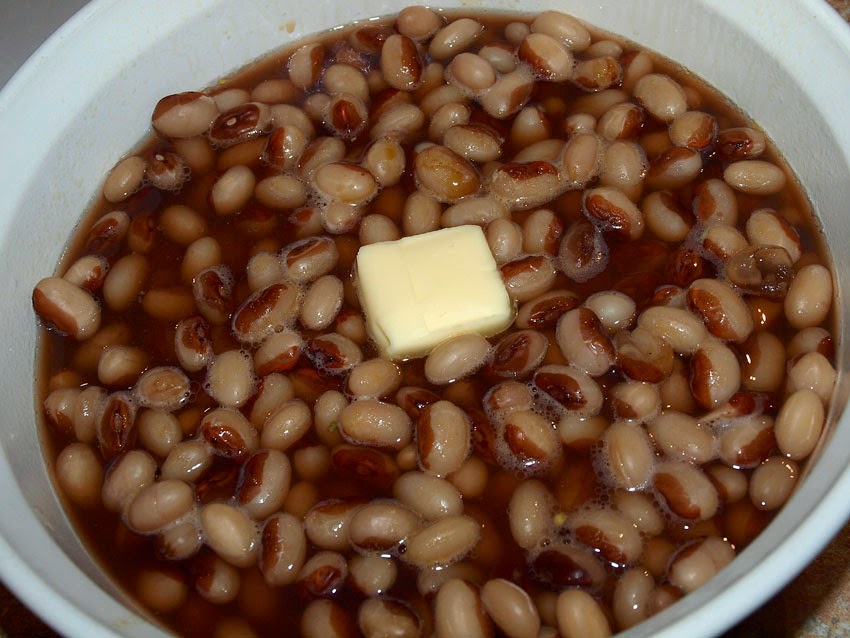 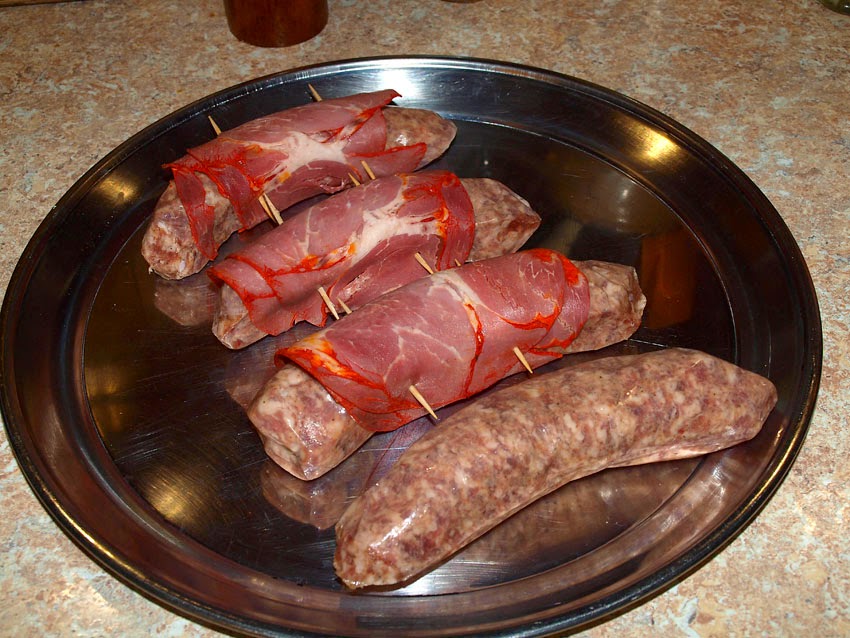 Some bacon and onions for the greens 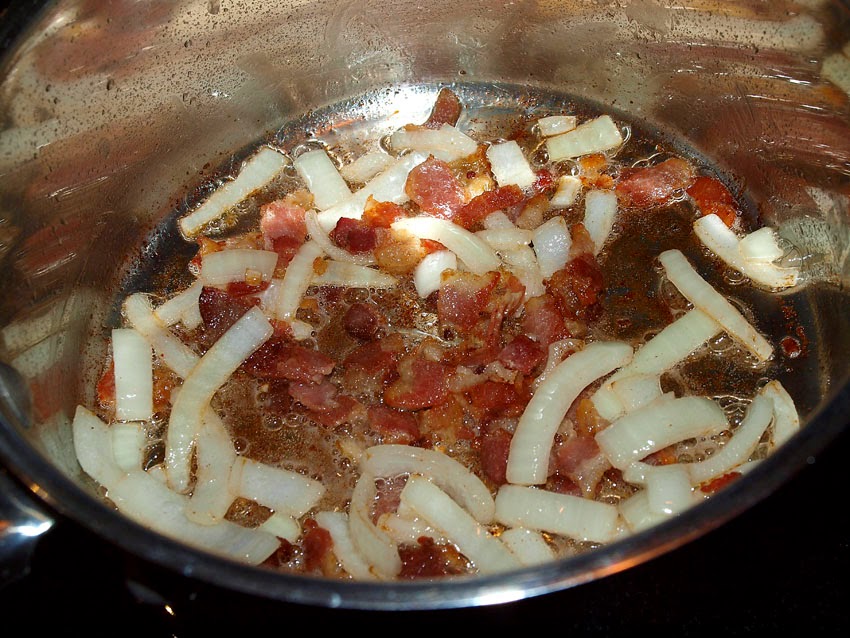 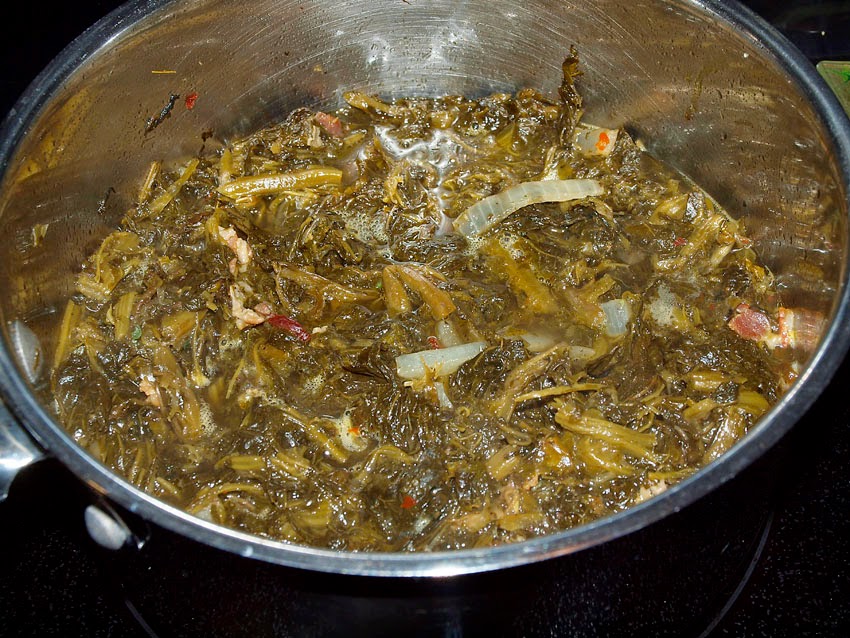 Brats on the smoker 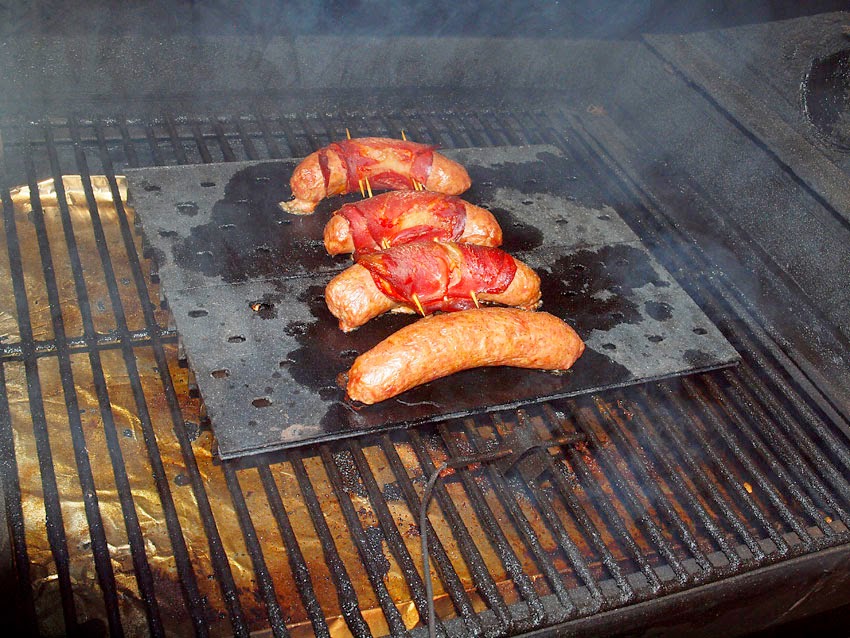 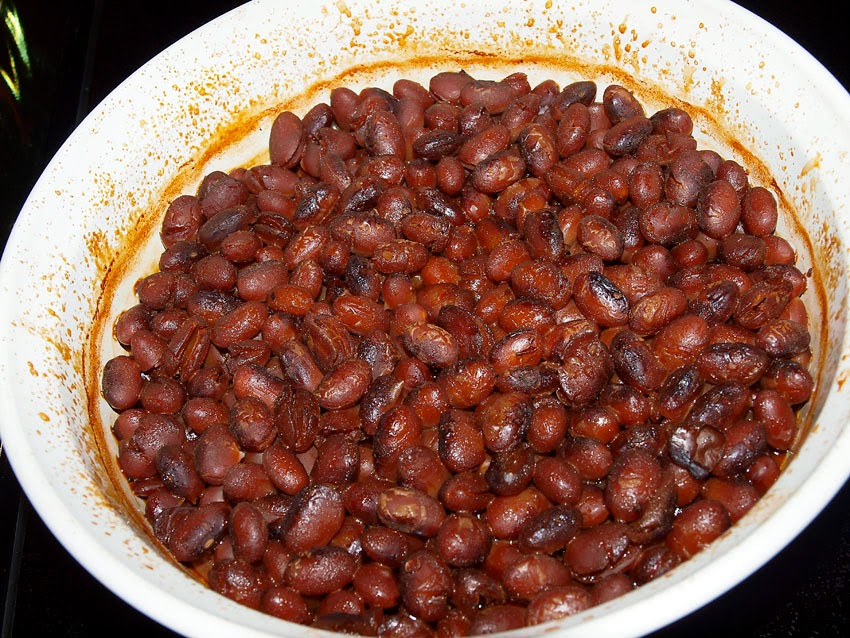 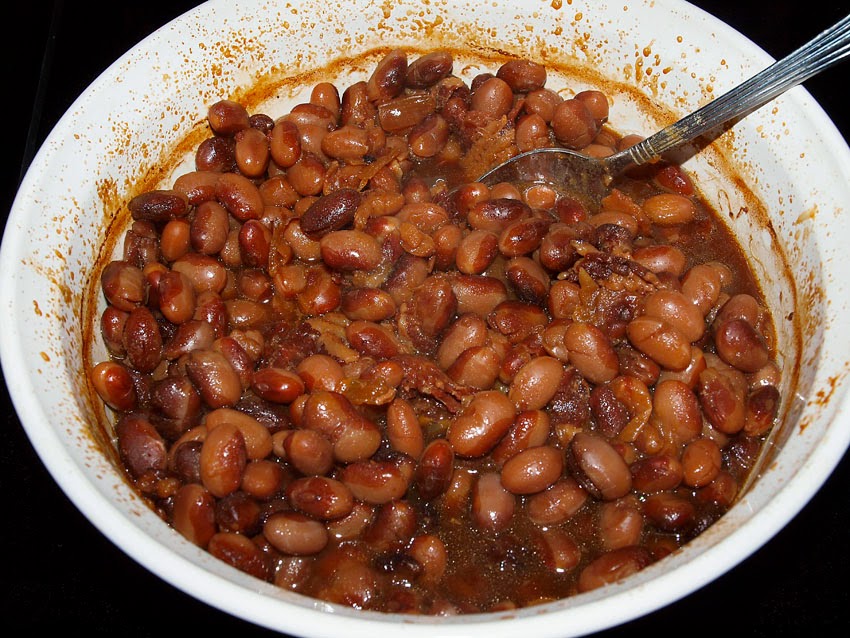 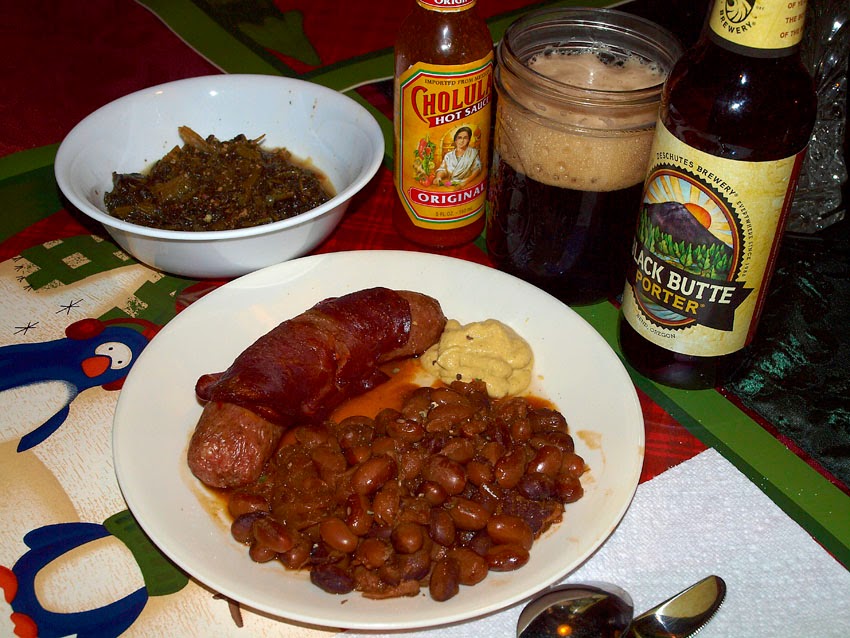