I remember watching a BBQ competition, on TV, several years ago where Myron Mixon did his chicken thighs in a muffin pan. I thought that would be good to try. I finally decided to give it a try. I did some research on the net. On pelletheads forum there was one who did it but not many. I found several other recipes; one on Oprah.com said it was Myron’s recipe. It seemed a little over complicated to me & the total cook time of 2 hours & 45 min seemed like way too long. Some loaded them up with Parkay, but I know when it says use Parkay, butter is much better!

I bought a cheap 6 muffin pan, for large muffins, & drilled 4 holes in each muffin cup for some draining. I bought a package of thighs that had six, just right. The evening before I skinned & saved the skin. I deboned them & trimmed off excess fat. Placed them in a tupper ware bowl & covered with buttermilk. Thighs & skin went in the fridge for overnight.

My niece had given me some of her organically grown sweet potatoes & decided to have one with the chicken. One was all I needed at almost 2 lbs. I could put it on a half hour before the chicken; I figured the chicken would take an hour to an hour & a half. Sweet potatoes do well even if overcooked.

I preheated my Traeger to 300 deg. I had cut the sweet potato crossways & inserted brown sugar & butter between each slice. I triple wrapped in foil & on the grill at 4:30.
I drained the chicken in a colander, added some Penzey’s Galena Street chicken & rib rub. I sprayed the muffin pan with olive oil & a small pat of butter in each cup. I folded the thighs, small side under, & placed in each cup, brushed on some melted butter, then some more Penzey’s seasoning. I trimmed each saved skin & placed over top, tucking in with a kitchen knife & a little more Penzey’s seasoning. I placed a large pat of butter on each one & got them on the smoker just after 5:00. At 5:40 I checked & they were up to 170 IT. I removed them from the muffin pan & on the grill, upped the temp to 350 deg to finish. I brushed more butter on & took them off at 6:10. Just over an hour for the thighs.

I covered with foil while I nuked a steamer bag of veggies. I served my wife then myself & in the room to watch TV. When I walked in she said delicious. I definitely will fix these again, I think it’s the first time my wife has liked thighs! They had a little crust on the bottom & were moist inside, the skin was good too. They also make a nice presentation. 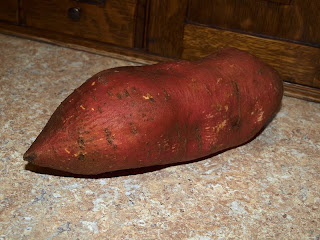 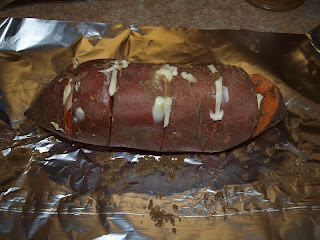 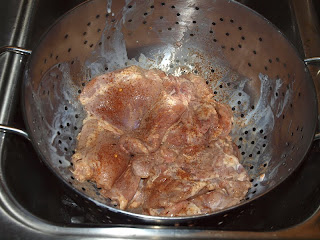 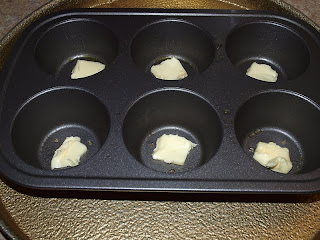 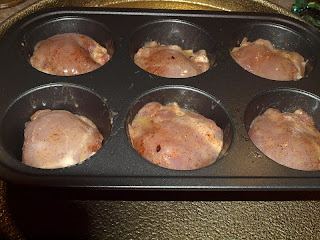 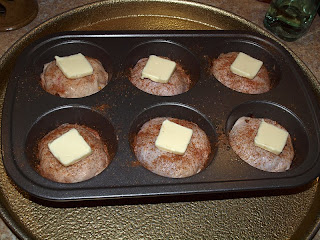 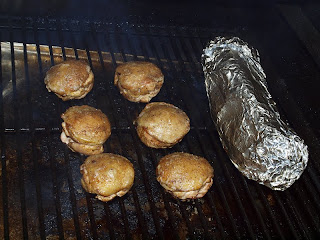 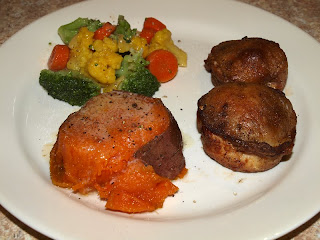