This Thanksgiving will be special to me, the first time in awhile; I will have all of my family here. My oldest daughter & husband from Indiana, my school teacher daughter from Illinois, my son, daughter-in-law, & grandson from Las Vegas. My son & family will just be here the one day & head to Toledo to have Thanksgiving with his wife’s family the next day. Since they will have turkey there; I decided to have beef. I am really not a turkey person anyway.

I had planned on smoking some chuck roasts & shredding; then heating in a Crockpot for my meal. I don’t usually like to buy meat from Wal Mart but saw this 14 lb. brisket on sale for $1.90 a lb. I would buy it & if it turned out good would have it re-heated with some good au jus.

I trimmed some of the fat off, but left most of the fat cap on. I seasoned it up; top & sides with some of Penzey’s beef seasoning, cracked black pepper, and dried garlic & onion flakes. I wrapped in saran wrap & in the fridge about noon. I planned to get it on at 10:00 PM so it would sit 10 hours.

I trimmed the fat, & sliced into less than ¼ inch slices. I saved out some to have for our supper & see how good it was. I got two one gallon bags of nice slices & one bag of burnt ends vacuum packed & in the freezer.

For our supper I placed the brisket in a pan, some of the au jus, & enough beef broth to cover. I had some leftover baby gold potatoes I sliced & browned up in olive oil. For a veggie I had a steamer bag of Green Giant cauliflower, sugar snap peas, carrots, & dried cranberries in a butter sauce. What they don’t come up with! It even had a little circle that would read done when it was nuked long enough. It all came together good. We had the beef as a sandwich, mustard & Claussens dill pickle slices. The beef was super tender & will be our Thanksgiving meat. We both loved the veggies, it made for a colorful plate, and what a time saver. 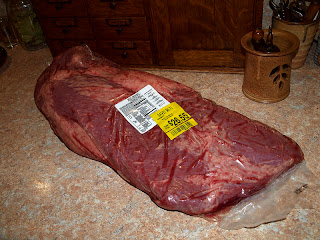 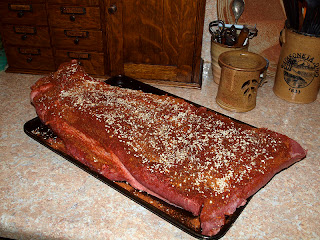 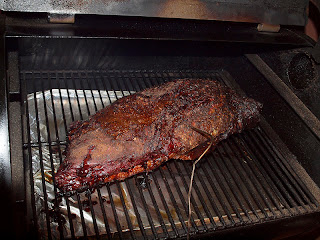 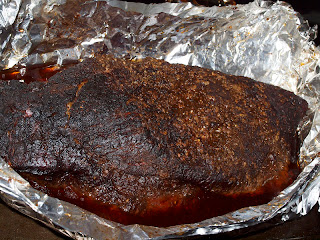 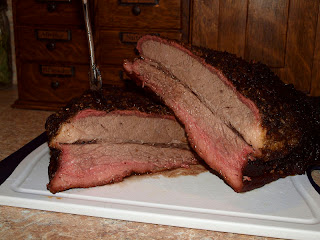 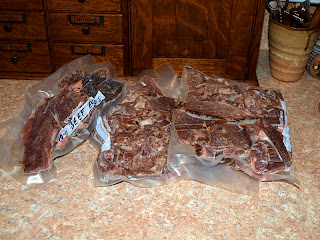 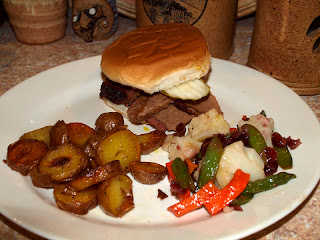 Smokin Don
Posted by Smokin Don at 6:12 AM