I made Cajun White Beans & Ham with help from Mary at her Deep South Dish blogspot. Check out her blog, link under My Favorite blogs, for many great recipes. I could eat her cooking 24/7! I used her recipe for Southern Creamy Butterbeans, the ingredients just sounded good to me. I substituted 2 cans of Bush’s cannellini white beans and 2 cans of Great Northern instead of butterbeans.

I love beans & could have them 2 times a week but my wife does not like them. You just cannot make a small batch of beans, at least to me. She would be gone most of Fri. the 4th so a good time for me to have some beans. I have read a lot about soaking dry beans overnight verses the quick method. I have never had very good luck with the quick method, always have trouble getting the beans soft & tender.

This time I would use a quicker method & used canned beans. I had a large slab of my butcher Kah’s smoked ham to use. Other than changing the beans, using 1 tsp. of Penzey’s Cajun seasoning, I followed Mary’s recipe pretty close. I had read where you need 4 – 14oz cans of beans to replace 1 lb. of dry beans in a recipe.

The ham was frozen so I threw it on the smoker at 180 deg & in ten minutes it was thawed, upped the heat to 350 for a half hour, turning the ham half way through. I sautéed the onions, garlic, carrots, & celery added to a Crockpot, a quart of chicken broth, the cut up ham, and seasonings. I let that simmer on low for a couple of hours while I made the cornbread.

For my cornbread I used Miracle Maize’s Sweet Style. It is as good as any I can mix on my own & gives the texture & sweetness us Northern people like. They also make a country style that is coarser & more like Southern people like. I preheated the Traeger to 350 deg. Mixed up the cornbread & in a preheated cast iron skillet, sprayed with some olive oil, & on the smoker. In 35 min the edges were getting brown & center was set.

I added my 4 cans of beans, a couple Tbs. of parsley flakes, and two large pats of butter to the Crockpot & turned to high. It would be about 2 hours before I was ready to eat. Supper time I chopped up some onion, made some white rice. I sliced a big piece of cornbread & smeared butter inside, a bowl of the beans topped with the onion & some rice, made for a might tasty supper. I even had a second bowl. 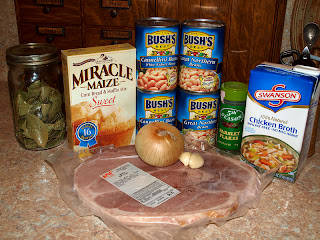 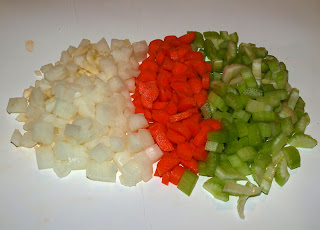 Ham on the Smoker 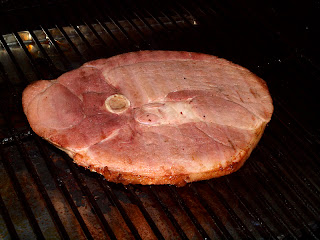 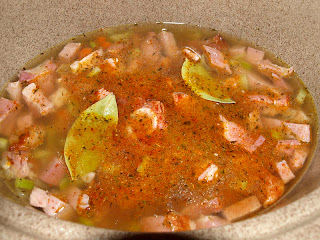 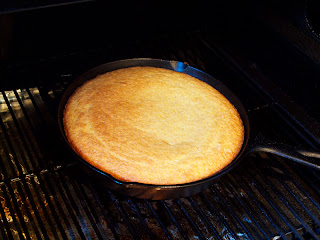 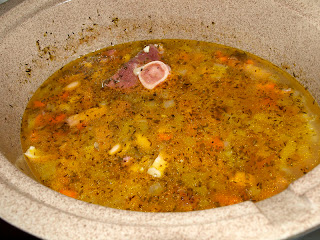 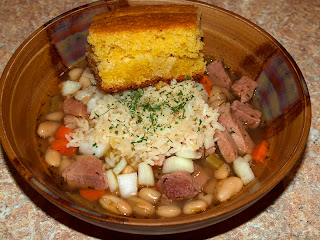 Smokin Don
Posted by Smokin Don at 1:06 AM