We don’t have steak that much anymore, & I was getting hungry for one. My favorite was the ones my Mom used to do. Her brother, a butcher, used to cut them special. One inch thick as big as a plate, porter house! She always over cooked them but they were tender & tasty. My favorite eating out was a filet mingon at Ruths Chris. My favorite cut used to be T-bone but now I would rather have ribeyes.

My butcher had some Angus strip steaks on special for $4.35 each. I picked out two that had some marbling. They were thinner than I would have liked a good 5/8 inch. Strip steaks are my least favorite of the steak cuts, usually not that tender. I would use a little help with Adolph’s tenderizer, no MSG. It’s a natural product made from papayas. My seasoning would be Reese’s Steak Salt; it is flake salt, black pepper, garlic powder, & celery seed.

My method I borrowed from fellow pellethead, billsbar. 40 min. on smoke 165 deg, then remove from the smoker; turn smoker to 400+ deg then do until desired doneness. About 2 hours before cook time I sprinkled the steaks with some Adolph’s; covered with saran wrap & in the fridge.

At 4:30 fired up the Traeger on smoke mode, it settled to 170 deg +- 5 deg. I peeled & cut up some potatoes, drizzled w/olive oil, salt & pepper, in the oven at 350 deg. I trimmed the asparagus, drizzled w/olive oil, white balsamic vinegar, salt & pepper. I put into the microwave to nuke when steaks were done. I had a loaf of take home & finish bake bread I would put on the smoker w/the steaks.

I got the steaks, seasoned & on just after 5:00, after 35 min. on smoke I pulled to rest until the smoker hit 400 deg. In 15 min. the smoker was at 410 deg. Put the steaks on, about 3 min later put the bread on. I turned the steaks after 6 min; did another 6 min. I pulled all to serve. Earlier I had nuked the asparagus to get done with the steaks. I rested the steaks & bread awhile. I cut the bread & served the wife & I.

Bottom line was the steaks were just a little over done, about 4 min per side would have done it. They did have a little pink, reminded me of Mom’s steaks; overdone but tender & tasty! For me the seasoning was just right. 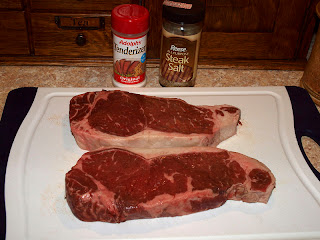 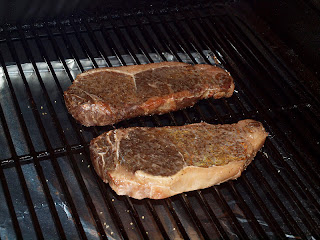 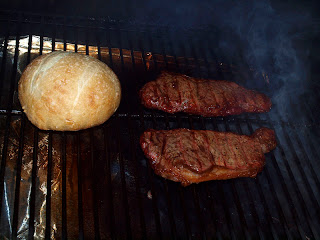 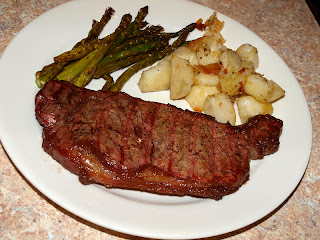 Smokin Don
Posted by Smokin Don at 1:58 AM