Would you believe Jan. 31st & 60 deg here in NW Ohio! I have crocuses blooming & even daffodils popping up. They had predicted warm today & I had planned on doing pizza on the Traeger. I always loved cabbage rolls but too big of pain to make. Then quite awhile ago I found a recipe for unstuffed cabbage rolls, just chop the cabbage, do it all in a skillet & serve over rice. I had ½ head of cabbage left & thought why not try an unstuffed cabbage roll pizza. It just might be good & would be fun to try.

I bought some ground round, a pizza crust, tomato sauce & paste, and pizza cheese. Cabbage rolls don’t usually have cheese but I had to have it for a pizza. I browned up the ground round w/onions, salt & pepper. Then I chopped the cabbage in ½ inch squares & cooked it until almost done, w/a little salt & pepper. I mixed up the sauce & heated it to a boil then let cool. Nothing left to do but assemble the pizza & bake. I cut a peach in half & would grill it w/brown sugar & butter on top to serve with the pizza.

I preheated the Traeger on high & while it was heating up I assembled my pizza. I put the peach halves on cut side down, 10 min. before the pizza. The Traeger was at 415 deg. I turned the peaches over & added some brown sugar butter mix, and added the pizza. After 15 min I rotated the pizza 180 deg. Another 7 or 8 min. the pizza was done.

I sliced the pizza & served the wife & I, we both had a small salad too. My unstuffed cabbage roll pizza was a hit & we both said we would eat it again!

I will add a printable recipe for the pizza and the skillet version. 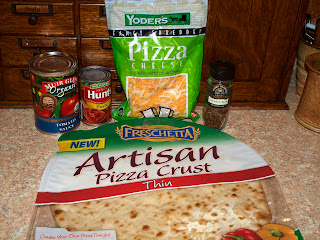 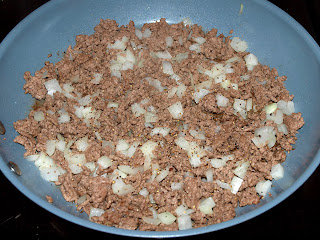 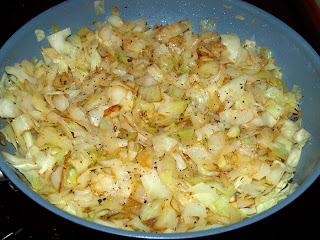 A layer of sauce & meat 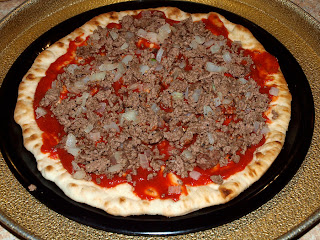 A layer of cabbage & caraway seeds 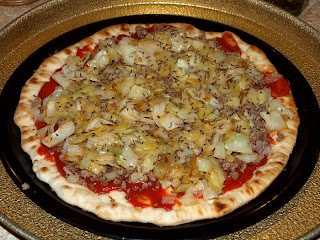 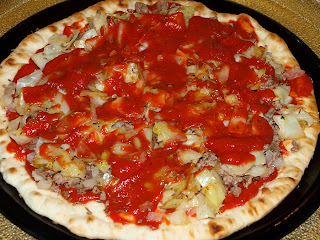 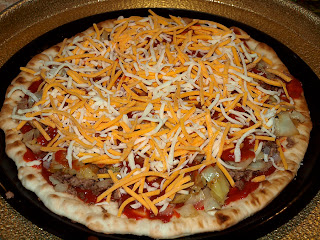 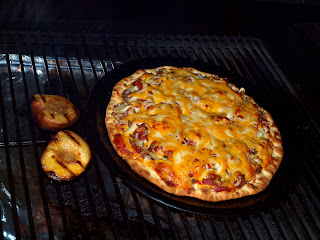 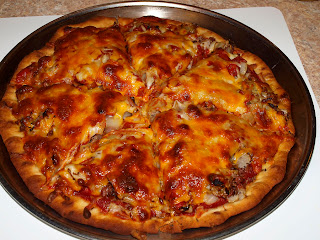 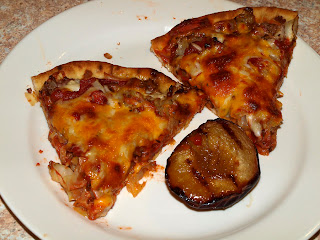