Tonight I had one of those easy meals planned, breaded chicken cutlets from my butcher and spaghetti squash. The melted onions would be perfect on top of the squash. Spaghetti squash is our favorite squash. I like to cut them in half long ways, clean out the seeds, then bake on a foil lined pan, cut side down at 350 deg for an hour to an hour & a half. Spray the foil with some olive oil or lay a TBS of butter under each half. When they’re done just scoop out the meat which comes out like strands of spaghetti; and serve with butter & seasoning. My wife likes it with spaghetti sauce over but I prefer some butter & garlic salt.

The skin is tough so use care when cutting in half, you almost need a machete! They can be baked whole or boiled but I find it harder to clean out the seeds after cooking. It is much easier to cut in half this way though.

When my squash was about done I browned the chicken cutlets in some olive oil, took my squash out of the oven. I spooned some tomato sauce on the cutlets & topped w/cheese; put them under the broiler until the cheese was melted & bubbly.

I plated it up & served some heated cheese bread on the side. My wife had butter & garlic salt on her squash. I had some of the melted onions, delicious! I can see more melted onions in the future!

Squash cut in half & seeds removed from one. 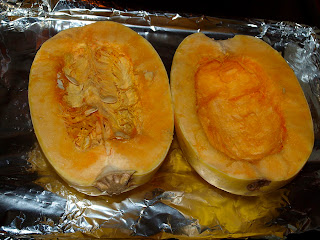 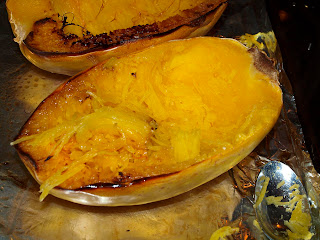 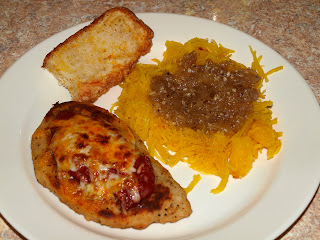 Smokin Don
Posted by Smokin Don at 2:12 AM