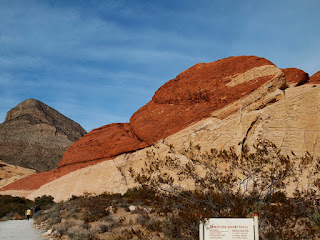 On Feb. 13th we flew to Las Vegas for a 10 day visit with our son & family. We were celebrating my 70th birthday, Feb. 25th. Our daughter from Chicago flew out to be there over the week-end. When we picked her up at the airport Fri. evening we went to a nice Greek restaurant for dinner.

Saturday evening we had tickets for “The Blue Man Group” at the Venetian Hotel. It was a surprise for our grandson, he and all of us really enjoyed the show. To me it is a show worth seeing, some good drum music & humor. We had great seats, 3rd row center, but had to wear raincoats. We did get some on us but wasn’t bad. Our grandson was tickled to get a picture with one of the Blue Men after the show.

Sunday evening after dinner I went out back for a smoke break & when I came in they had a cake for my birthday. It was a surprise.

Monday morning we took our daughter to the airport for her trip home. Tuesday we took a drive through Red Rock Canyon. It is about a 15 mile drive, a visitor center has nice displays, some desert animals, and information on the desert plants. There are stop offs at the scenic spots. Most people who go to Las Vegas never get out of the hotels & casinos, if you have time while there this is worth seeing.

One day out driving we passed Dom DeMarcos Pizza, my son said he wanted to try their pizza. The week before President Obama was in town for a fund raiser. Secret service or an aide called & wanted to order some pizza. The owner said we don’t deliver, he was told he definitely wanted to deliver this order & it would probably benefit him. He decided to take the order, he was met by secret service & then found out the pizza was for the President & family. He waited around for 45 min. & was told the pizza was good. He said his business increased by 20% after the story was in the papers.

Our last night there we went for Dom DeMarcos pizza. It was great, the best pizza I have ever had. They have thin crust New York style or square Chicago style. We had the New York style. It was about twice the price we pay at home but was worth it. We had calamari & French fries for an appetizer, enough for the four of us & our grandson.

Even though I thought the pizza was a little pricey, we ate the calamari & fries, a large pizza & I had a $5 beer. The total bill was $56, pretty reasonable dinning any where for five people. So if you are in Las Vegas & like pizza you have to try some of Dom DeMarcos pizza. He immigrated here from Italy in 1959, opened Di Farra’s pizza in Brooklyn. He just opened the one in Las Vegas last year.