Coming home from 10 days in Las Vegas, at our son & family’s home, I was having withdrawal from not having my usual diet of meat & potatoes.

We got home late Thurs. night. Friday morning my first errand was to get my Mag from the kennels, he was happy to get home again too! My next trip was to my butchers to get some meat. I went a little overboard & bought fresh sausage, a pound of bacon, 2 rib eye steaks, a whole fryer chicken & a 3 lb pork shoulder roast.

Saturday on my birthday we were going out, & I was just going to rest. I couldn’t stand it though, I wanted to fire up the smoker! I decided to do the chicken & save for later. My neighbor had given me some Moore’s marinade for watering their flowers while they were in Texas the past summer. I was a little reluctant to use it since it said natural smoke flavor, most of the time I find smoke enhanced marinades & sauces too artificial tasting.

After cooling some I had to try a wing, then I had the second wing. That was good! A little more smoke taste than I usually get, but to me it was not artificial tasting. I will use it again. They have a web site, just google Moore’s marinade, & it says available at most Kroger stores. I would say if you are looking for more smoke, give it a try. I want to try it on a brisket soon. 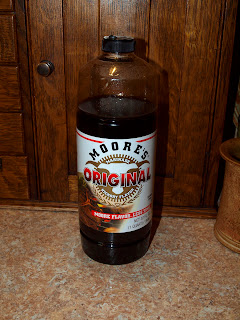 Chicken on the Smoker 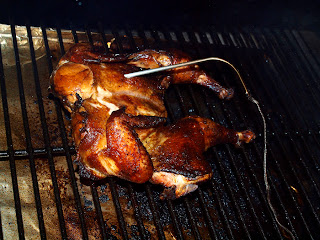 All done, ready to sample 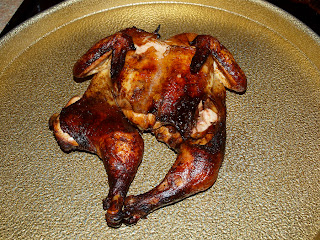 Smokin Don
Posted by Smokin Don at 6:18 AM