We are finally getting spring weather and a nice 75 deg. yesterday. I had some bricks come loose on my front porch so I cleaned it all up and re-glued them. Then I replaced the fire pot in my Traeger smoker. That didn’t go well; I twisted the set screw off that held the hot rod in place. I drilled and tapped a new hole and finally got it back together. I fired it up at 200deg. for a half hour to burn off any oils.

I had thawed out some steaks for our supper; they are my favorite thick tenderloin steaks I get at Sam’s Club. For my sides I had smashed yellow potatoes and asparagus that go great with the steaks. I had planned to smoke the steaks in my Traeger to 120 deg. IT then sear on my gas grill. I dry brined the steaks with some kosher coarse salt for 4 hours and seasoned with a little Weber’s Chicago Steak seasoning.  I served them topped with gorgonzola chive butter I had made.

I was too tired to get the gas grill uncovered and heated up so decided to just do them in my smoker to an IT of 140 deg. I had some problems with my smoker; the controller was reading way too high above the 200 deg. I had set it for. My monitor probe was only reading 199 deg. at grill level and the controller was saying 275 deg. From the IT of the steaks I knew it was only running about 200 deg.

I had my asparagus ready with some olive oil, balsamic vinegar and salt and had it on the smoker about a half hour. I nuked the potatoes then smashed them and added some gorgonzola chive butter. The steaks had been on for an hour and was 115 deg. IT so I pulled them and seared inside in my stargazer CI skillet for 4 minutes per side. I had placed the asparagus and potatoes in a 300 deg. oven  while I seared the steaks.

After all that the steaks came out beautiful; juicy and great flavor. My wife and I agreed they were better than any from a restaurant we have had. The gorgonzola chive butter is our favorite topping for steaks. I make it with a stick of softened butter, two TBS of crumbled gorgonzola cheese and a good TBS of snipped fresh chives. If you use dried chives a good teaspoon is enough. Mix all together well then place on plastic wrap. Wrap forming a round stick and place in the fridge to set up.

Steaks ready for the smoker 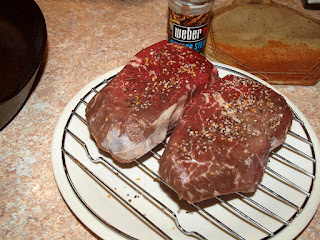 Searing after and hour of smoke 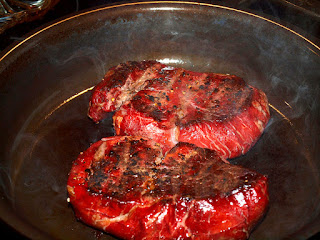 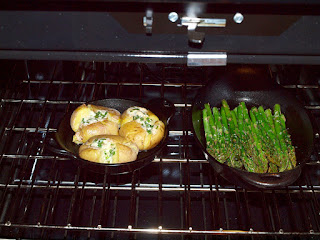 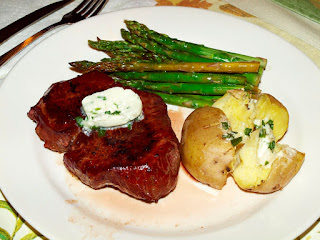 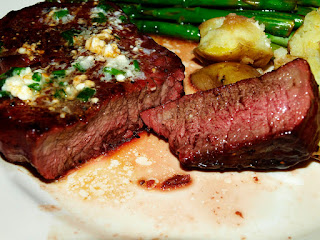