I sure messed up getting the pics of tonight’s cook. When I served the wife I said I forgot to get pics of the potato and carrot dishes. After downloading my pics I saw I also did not have a pic of the skillet full of gravy!

This is pretty easy to make and tastes good too. I had a pound of ground chuck and made up 4 patties. I seasoned them with a little McCormick’s gourmet burger seasoning. My sides were roasted baby Dutch potatoes and baby carrots. I made just enough for tonight’s meal. I added butter to the dishes, some garlic salt on both and a little Mirin on the carrots. They went in the microwave 1.5 minutes to melt the butter and stirred to coat. They went in a 350 deg. oven covered for an hour.

When they were in I made a batch of Pioneer Country Gravy and heated the skillet to do the burgers. I sprayed in some olive oil and did the burgers about 4 minutes per side. I removed them to a plate and took off most of the grease then added a handful of chopped onions. I added the burgers back in on top of the onions. They would help hold them off the bottom. I added the 2 cups of gravy and as soon as it was all bubbly I turned it down to a simmer.

I removed the covers on the veggies and stirred, the last 25 minutes were uncovered and stirred a couple of times. After I added the gravy the burgers went another 20 minutes partially covered. We had are usual toasted English muffins with the meal.

Even though I didn’t get as many pics as I wanted I did get a pic of the wife’s plate before I put some gravy over her potatoes. She doesn’t need her potatoes all smashed up like I do so I get plenty of potato gravy ratio! 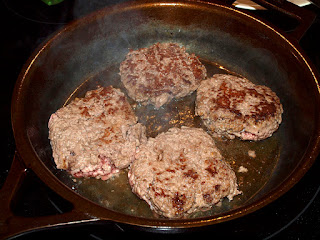 Back in over the onions 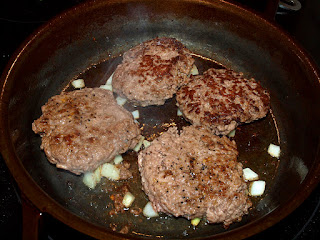 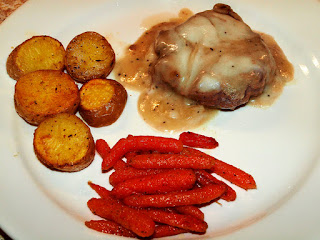 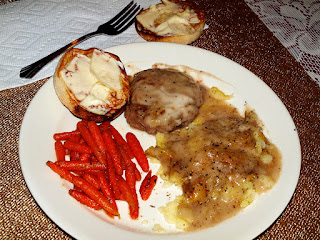