I never heard of a beef tri tip and I grew up around my Uncles slaughterhouse and grocery. I guess they have been popular in California for a long time; and done over a red oak wood fire on an Argentina style grill. They are done kinda hot & fast to the desired doneness. I have done 4 so far and they were done for an hour of smoke at 200 deg. then went to 325 deg. to an IT of 145 deg.

I enjoyed getting back out on my smoker even though it was a cold damp 39 deg. I was glad when I went to my butcher the other day and he had a beef tri tip roast in the meat counter. I have wanted to cook one like a brisket since most in LTBBQ forum have tried it and says they are great.

It weighed 2 ½ lbs. and I trimmed a ½ pound of fat off. Thursday night I rubbed on a little olive oil then seasoned with salt, pepper, granulated garlic and parsley. I wrapped in plastic wrap and in the fridge overnight.

A half hour in I knew it was going to get done early; I should have known it was not as thick as other tri tips I have done. At grill level I was running 225-230 deg. I was going to wrap at 140 deg. IT but decided to wait until 150 deg. In an hour and 15 minutes it hit 150 deg. IT. I laid it on two sheets of foil, added 3 pats of my gorgonzola garlic chive butter, double wrapped and back on.

At 4:30 I put a potato with potato rod in the oven at 350 deg. to bake 1 ½ hours. I cleaned the asparagus and made the sauce. I found the recipe at Seasons and Suppers by Jennifer and was called Skillet Asparagus Supreme. We love asparagus and this was a little extra good! It went into the oven at 5:30 to bake for 25 minutes. I forgot to get a photo of it out of the oven; I had already plated our plates. It does make a nice presentation.

It all came together at 6:00 and we sure enjoyed it. I served the wife first and poured a little of the pan juice over the beef but it would not have needed it. I sampled a piece while slicing and it was beefy tasting and moist. I toasted some English muffins and we had the gorgonzola butter on it. Before I got set down with my plate the wife said the beef sure is tender! 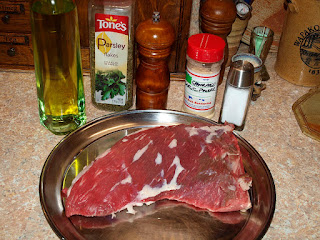 Seasoned & ready for the fridge overnight 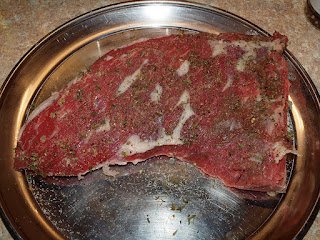 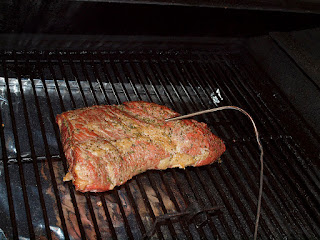 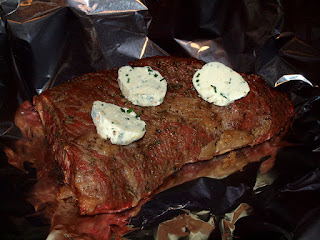 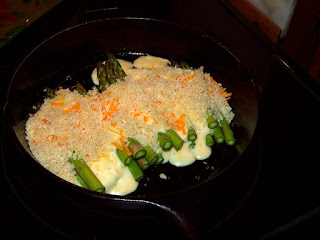 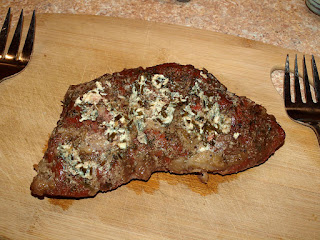 Slicing across the grain 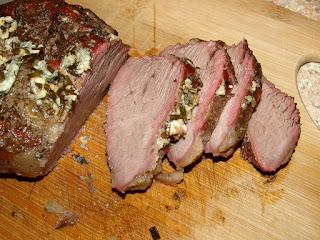 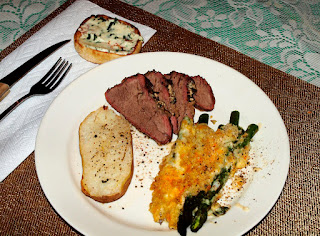