I have a Wapak Z logo skillet I use to make corn bread and a Wapak sad iron. My wife got me an Ahrens and Arnold skillet for Christmas; that was the first time I knew they were made here. My wife’s aunt is an avid antique collector. Her and my wife goes to a lot of auctions together. The last time my wife was down to see her she sent a cast iron ashtray for me; she knows I like cast iron. Here it was a Wagner Ware. It has an oval logo with one W for Wagner and Ware. It says “made in the USA” 1050 and an E at the bottom.

I had a 3 leg cast iron bullet mold ladle I bought about 40 yrs. ago for making lead round balls for my black powder rifles. I think I bought it from Lahmen’s Hardware; the back says “Reproduction from original old bullet mold ladle”.

I cleaned both of them out and re-seasoned in the oven twice to get a nice black color. I have a place above my Ahrens and Arnold skillet to display the ashtray. 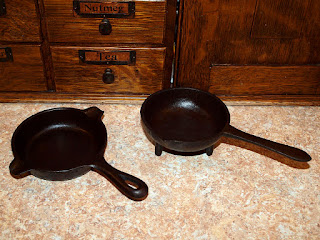 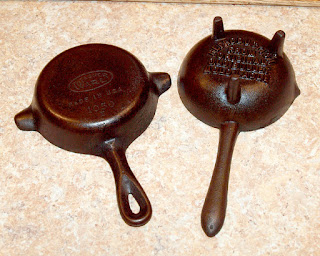 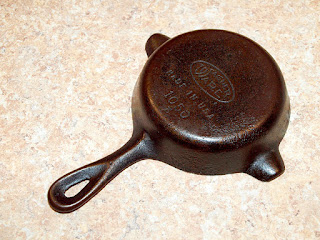