My wife and I both like sauerkraut so you would think that in all the years I have been cooking I would have tried sauerkraut soup. This is the first time that I can ever remember making some. I guess I love pork and kraut and it tastes so good I always made kraut with smoked pork roasts, sausage, brats or ribs and slow cooked it. I usually served mashed potatoes with it.

For my soup I chose a recipe by Rachel Ray that sounded good. I had almost 2 lbs. of kraut that needed used and some bacon and ham in the freezer. I ended up buying some diced ham since the package I had was too large and didn’t want to thaw it all out. What I bought was just 8 oz. and the recipe called for 12 oz. I had two links of smoked sausage, about 8 oz. I thawed to add too.

Rachel did hers in a soup pot and I decided to adapt it to a Crockpot, then I could bake a loaf of my Bread in 5 peasant bread to have with the soup and have time to relax before supper. I browned up the bacon, then the ham and then the sausage separately and added it to my Crockpot. I had enough grease left so I didn’t use any butter. I sautéed the onions added the garlic and carrots; they went in the pot.

I peeled and diced the potatoes in about ½ inch pieces. I put them in the pot along with salt and pepper; I should have sautéed then a while too since they were not as done as I like. Next I added the cannellini beans. I drained the sauerkraut and added it with a bay leaf. I didn’t rinse the kraut since we like it sour.
I added the quart of chicken broth and looked like enough liquid so I didn’t add any water. The Crockpot was on high and it was 2:00 when I got it all in.

I got my bread cloaked and let rise for an hour. I let it rise longer than the 40 minutes per recipe since my prior loaves had good texture but a little dense. I thought it helped and the finished bread looked better.  At 3:15 I got my bread in the oven and turned the Crockpot down to low. After the bread was baked I cleaned up my kitchen some. My wife came home from getting her teeth cleaned and finished cleaning up for me. I laid down for a half hour nap.

At 4:45 I checked my soup and stirred it all up. I tasted it and the potatoes were not done enough. I turned it back on high. It was about 6:15 when I served it up. The potatoes were done but could have been softer. The wife and I both thought this was good soup and the crusty peasant bread went well with it. The smoked sausage was a good addition too. 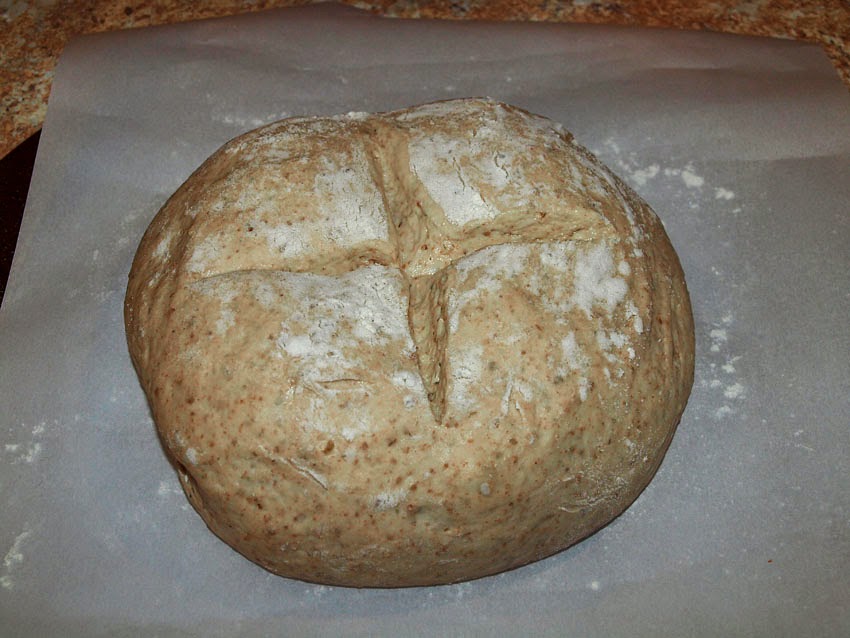 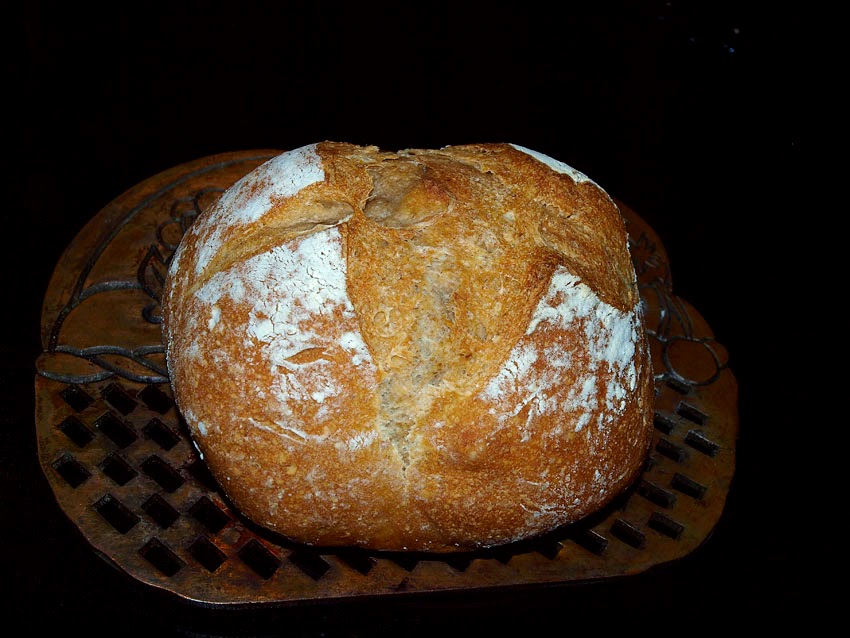 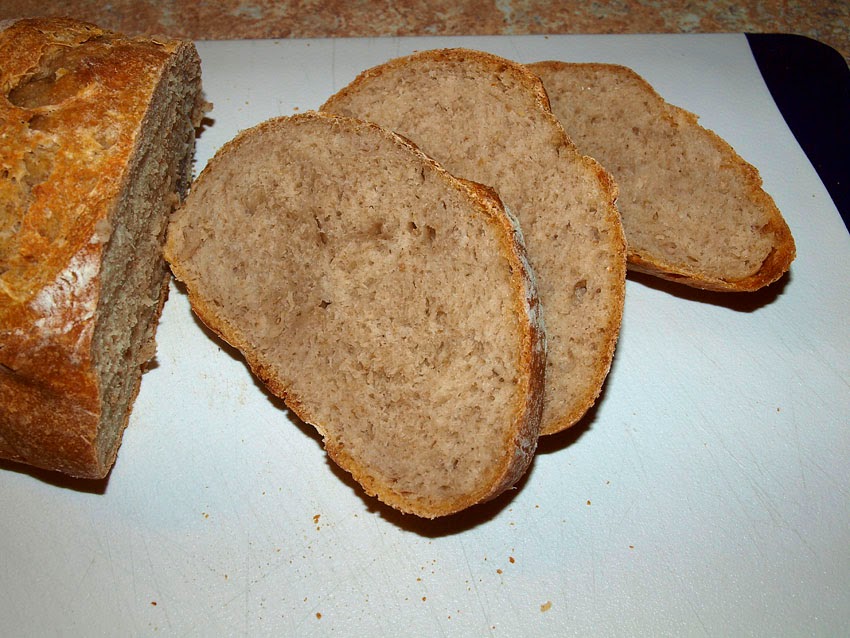 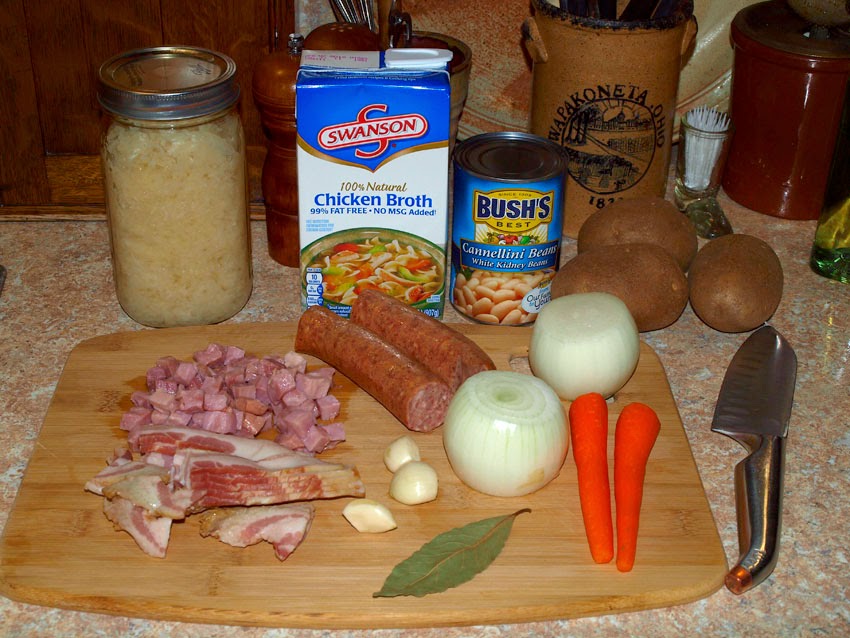 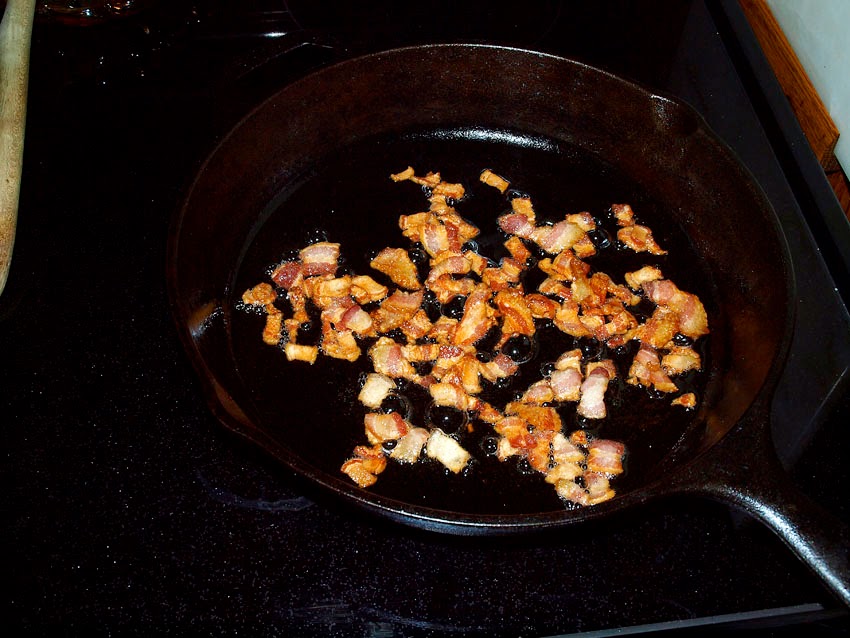 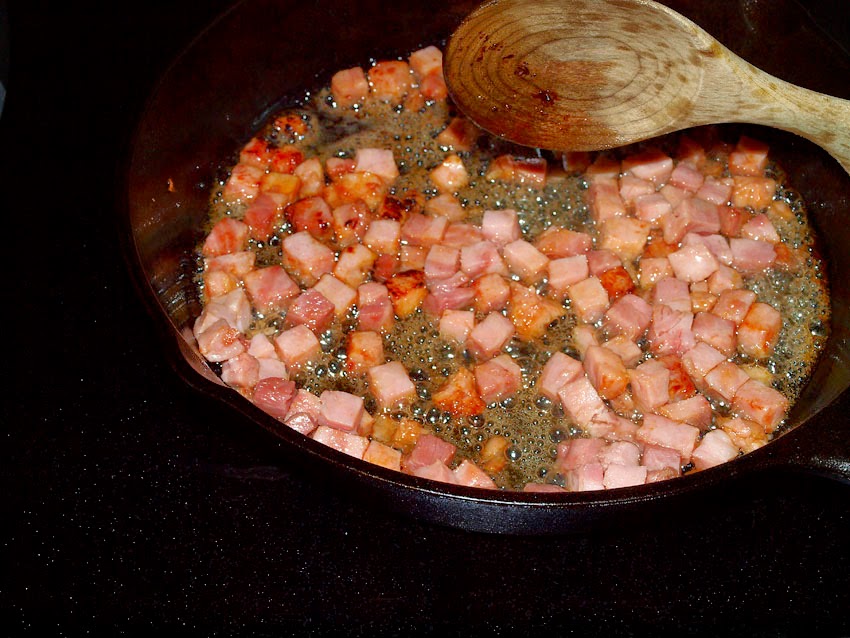 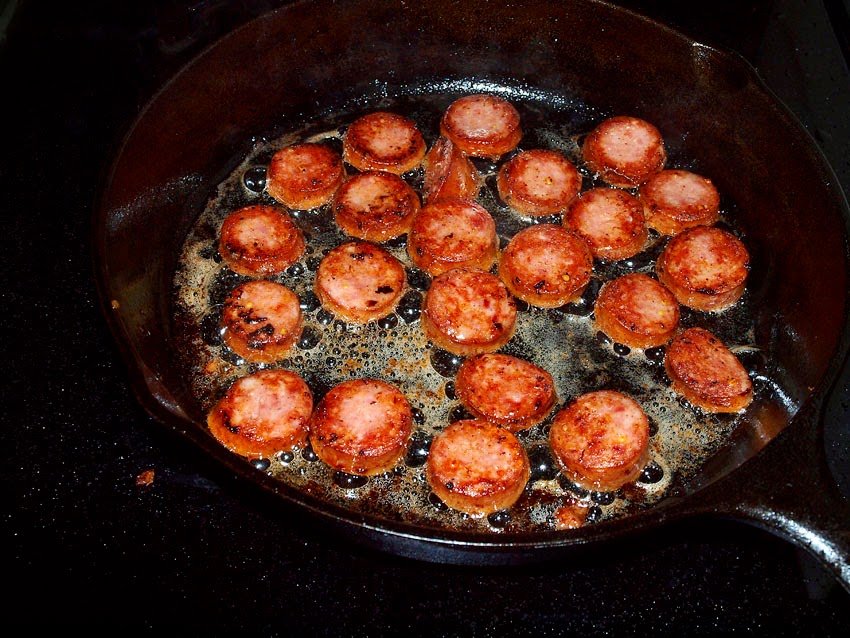 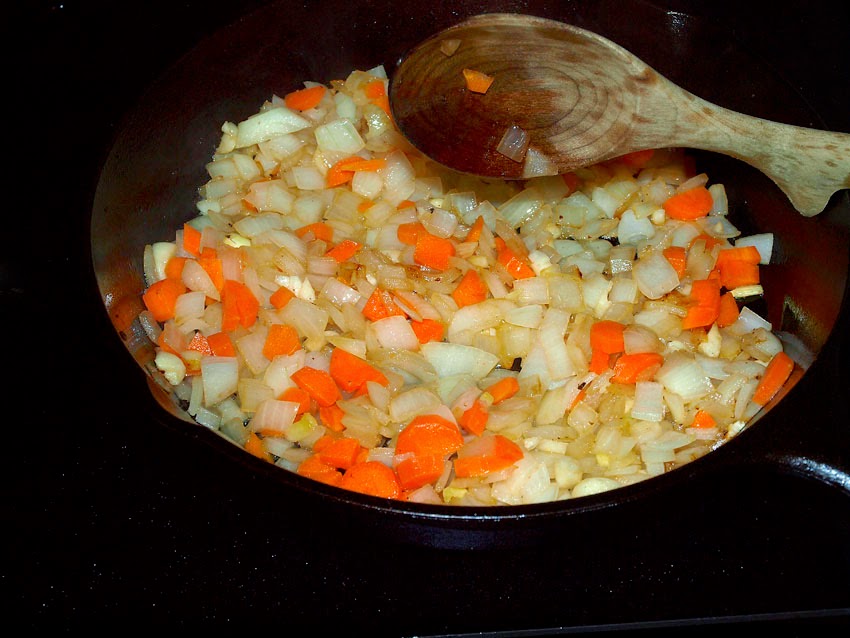 Meats in the pot 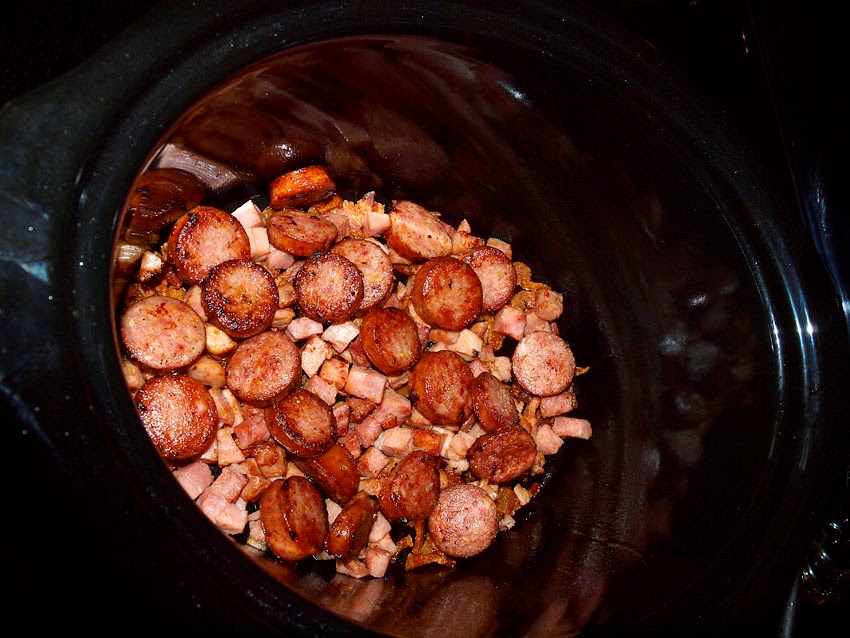 Onions and veggies and a layer of potatoes 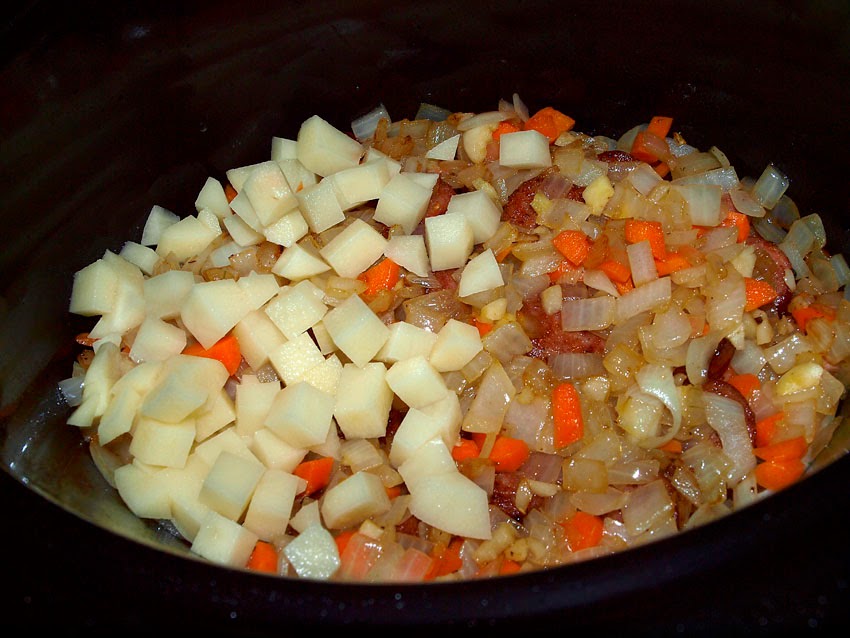 A layer of beans 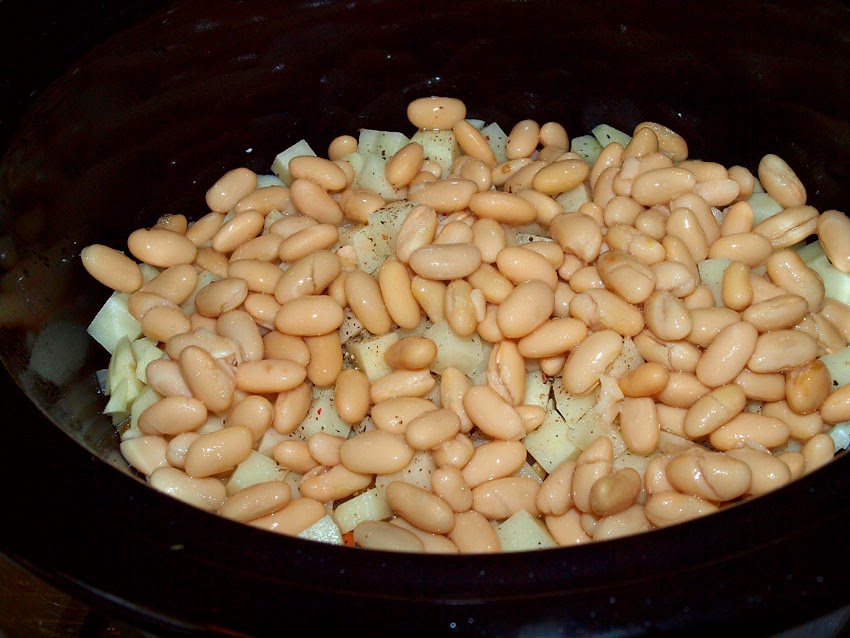 The kraut, broth and a bay leaf added 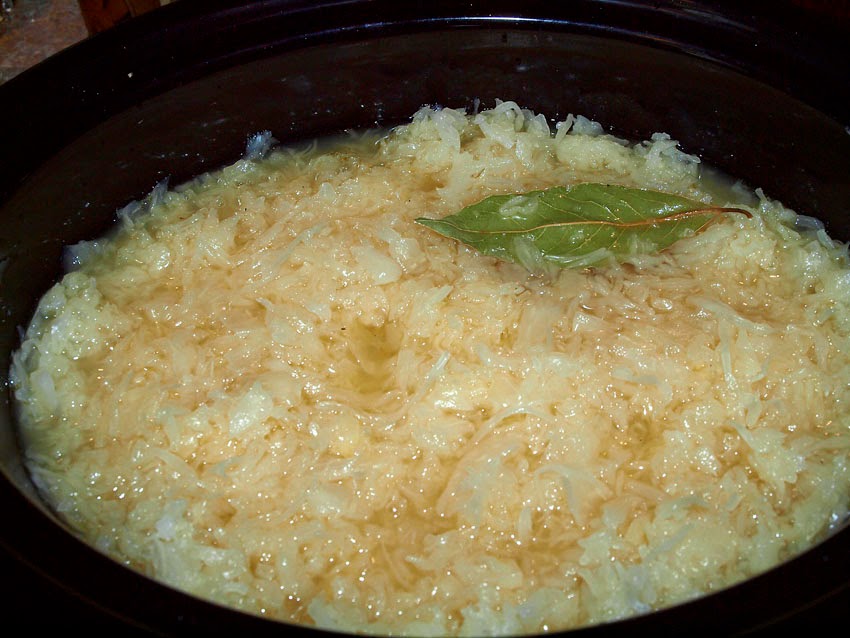 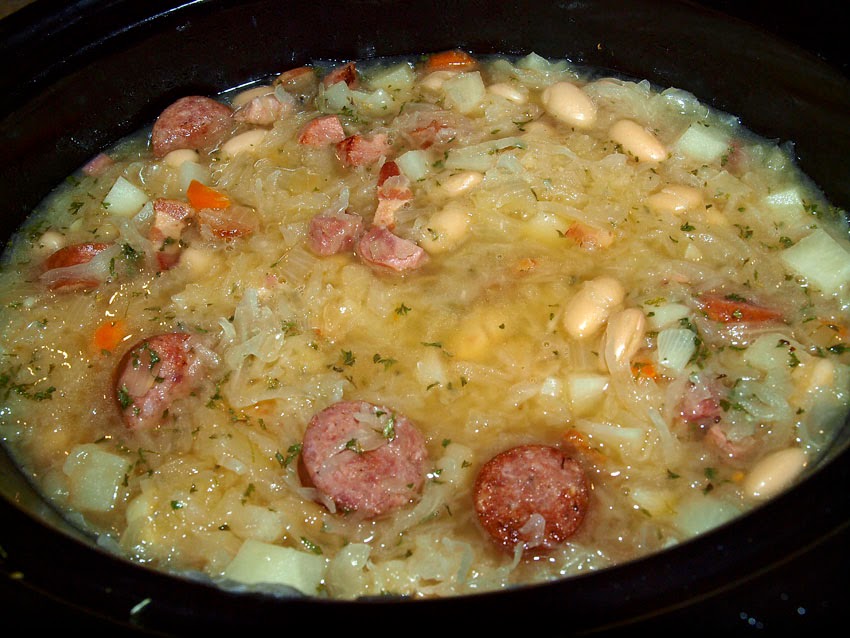 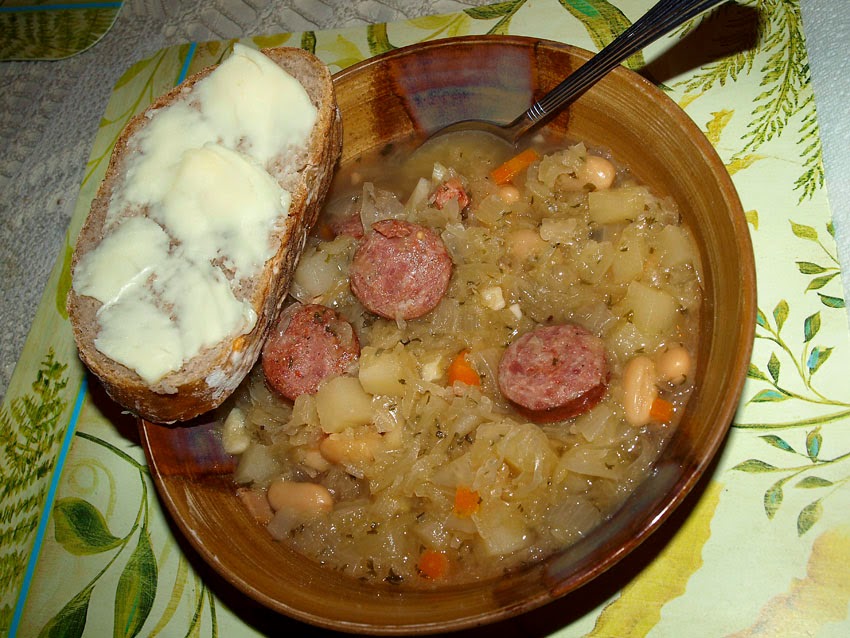