The past month I saw Art’s (ACW3) post of French onion soup and several other members made some too. I hadn’t made any for ages and it is one of my wife’s favorites. About two years ago she lost a back rear bottom tooth and then lost the one on the other side and has had trouble chewing. The Dentist said she would not like the plate & she should do transplants if we could afford it. She went with the transplants and just got them done this week. I told her we would have steak tonight to celebrate, but now I am afraid she will always eat her share of steak now!

I bought a Ribeye at my butchers, $10 and told her I thought it would be enough to split after having the soup and have a salad and some sautéed mushrooms with the steak.

I copied the recipe that Art uses and it was close to the way I usually make mine except I don’t use any wine and had never simmered the caramelized onions and broth that long. Instead of wine I use a TBS. of Worcestershire sauce. I have never made my own broth like Art did but I bet it is better!

For my bread I like to toast some English muffins and use a half to float and top with cheese and then under the broiler to melt the cheese and brown some. For my wife’s I used a slice of Swiss and a mix of shredded mozzarella and provolone. For mine I used some Applewood smoked gruyere and the shredded mozzarella and provolone. I think I prefer all Swiss or gruyere. My batch of soup was about half a recipe, I used 3 med. onions, a quart of Swanson’s beef broth and a Tbs. of Worcestershire.

I served the soup about 5:15, it was great and I think the extra simmering really brings out the flavors. My wife commented how good the broth was.

After I ate my soup I seasoned the ribeye with some Penzey’s Chicago steak seasoning and heated up two skillets with a little olive oil spray. I preheated the oven to 350 deg. it was almost there from melting the cheese on the soup.

I did the steak on med. high 3 ½ minutes on the first side and turning the heat back to med. then 3 minutes on the other side and then in the oven for 4 minutes. Meantime I was sautéing the sliced baby bella mushrooms, added some white balsamic vinegar, salt and pepper.

It was a little after 6:00 when we ate; the wife had made salads and the steak was just the way we like it rare +. I gave my wife the best half of the ribeye; well it was celebrating her teeth! 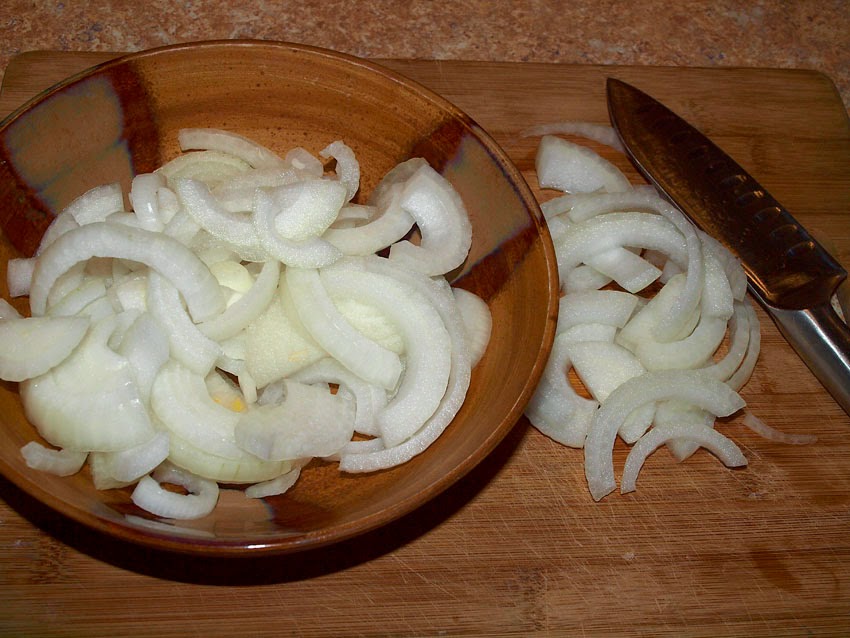 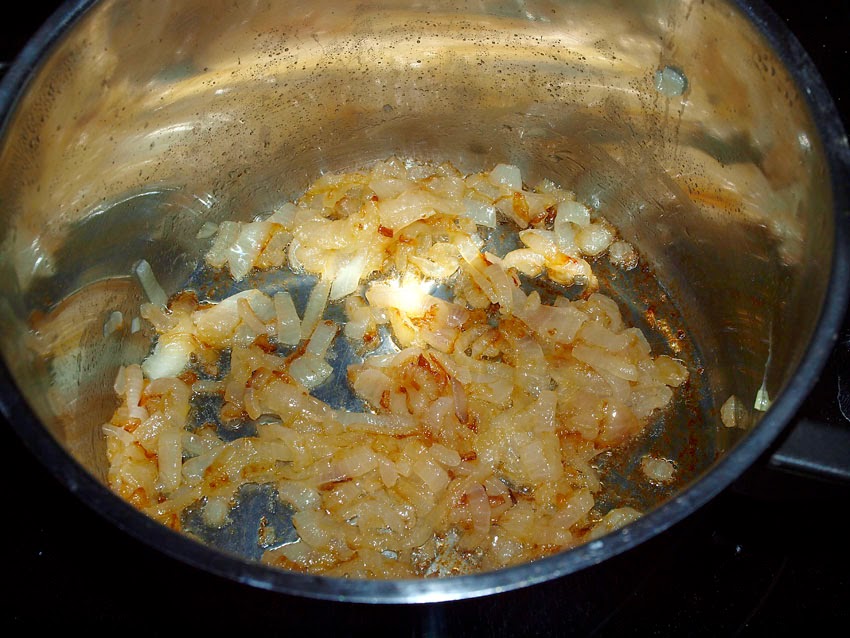 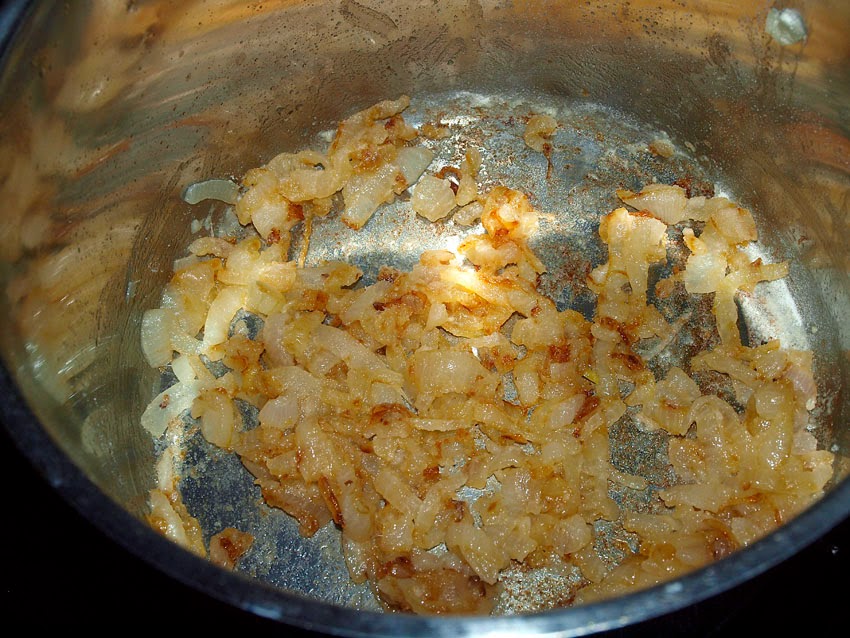 Broth and a pat of butter added 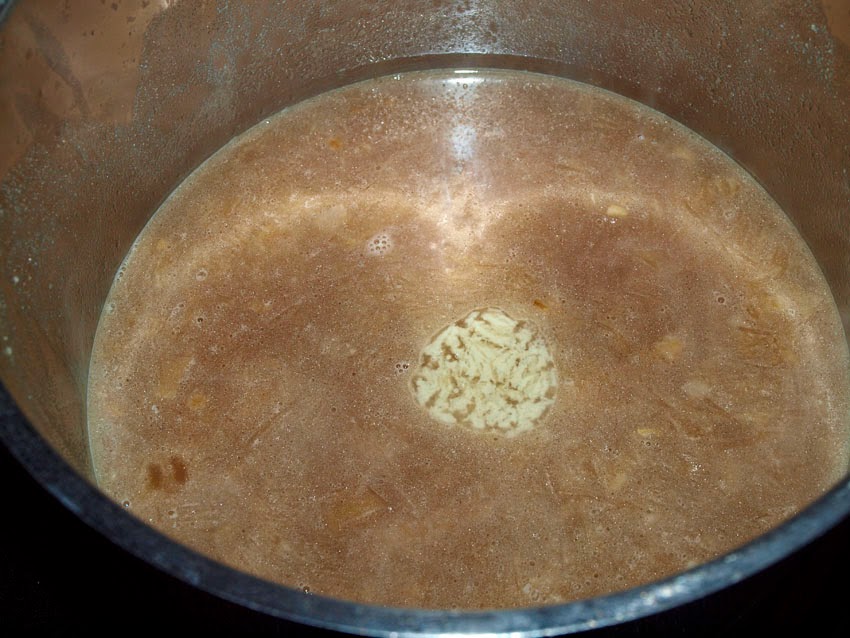 Making up my soup 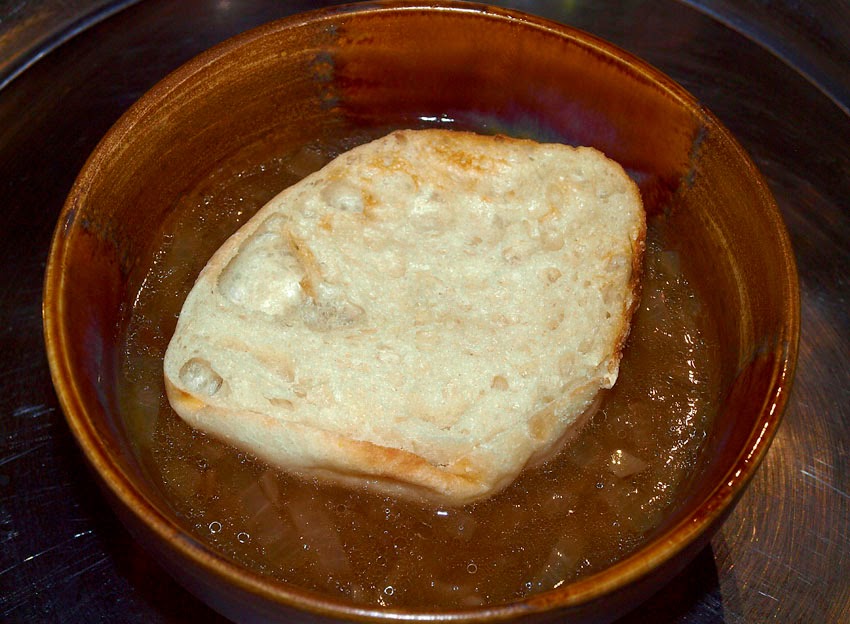 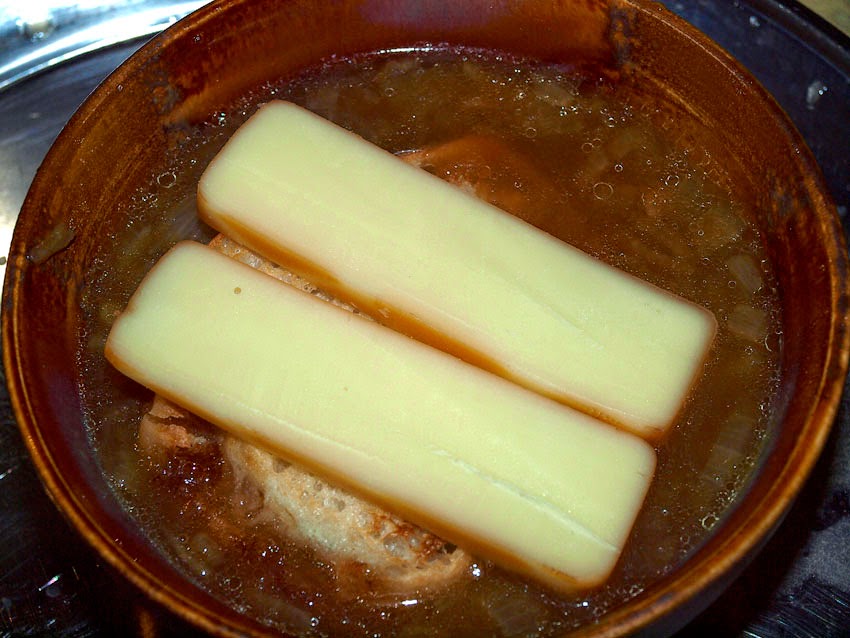 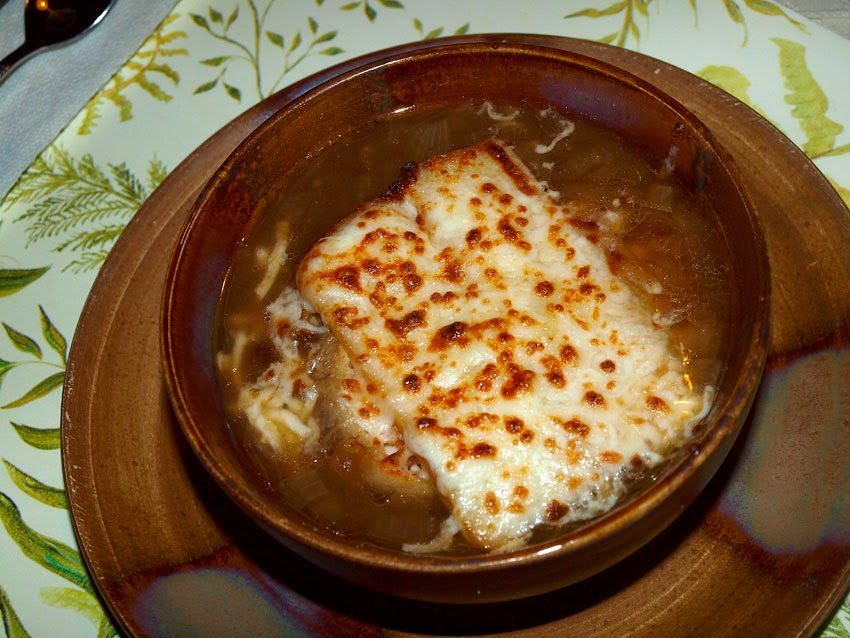 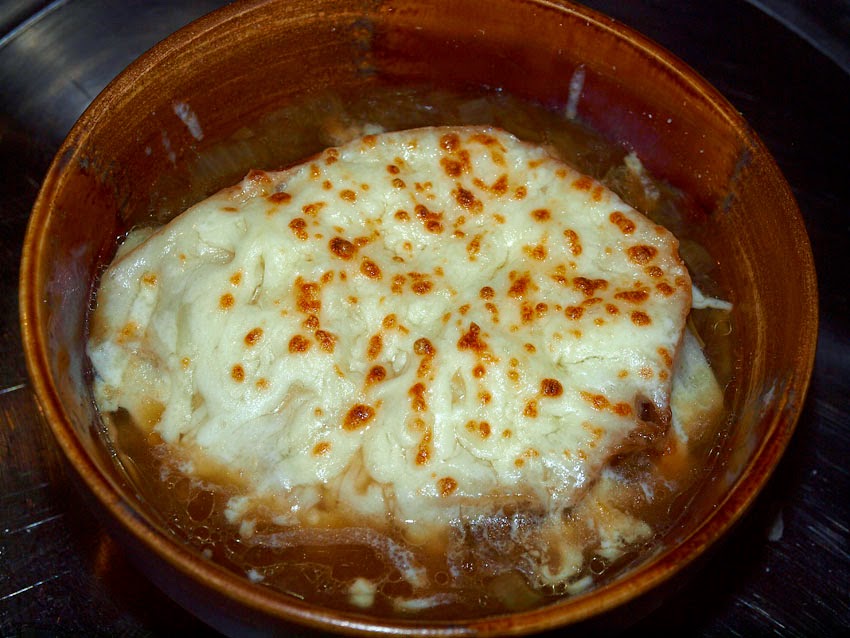 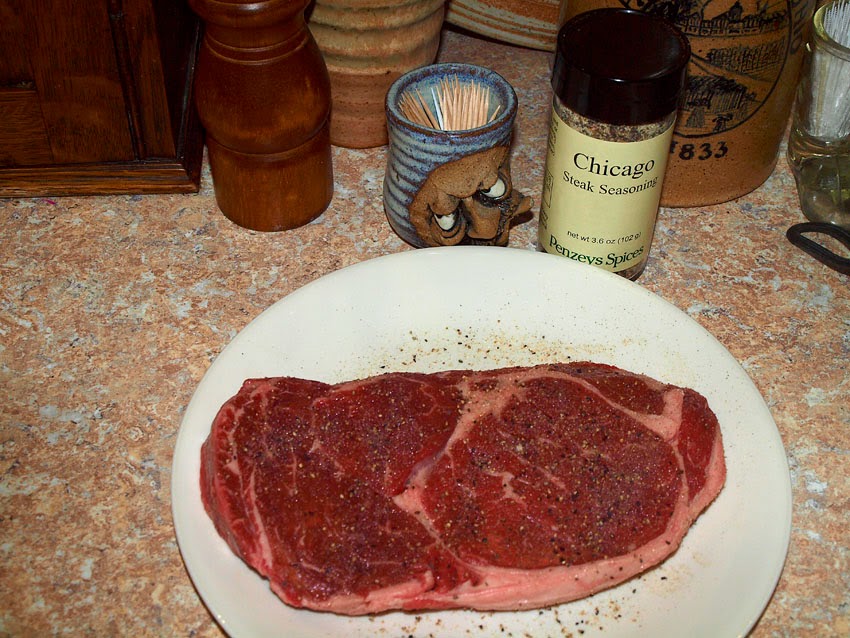 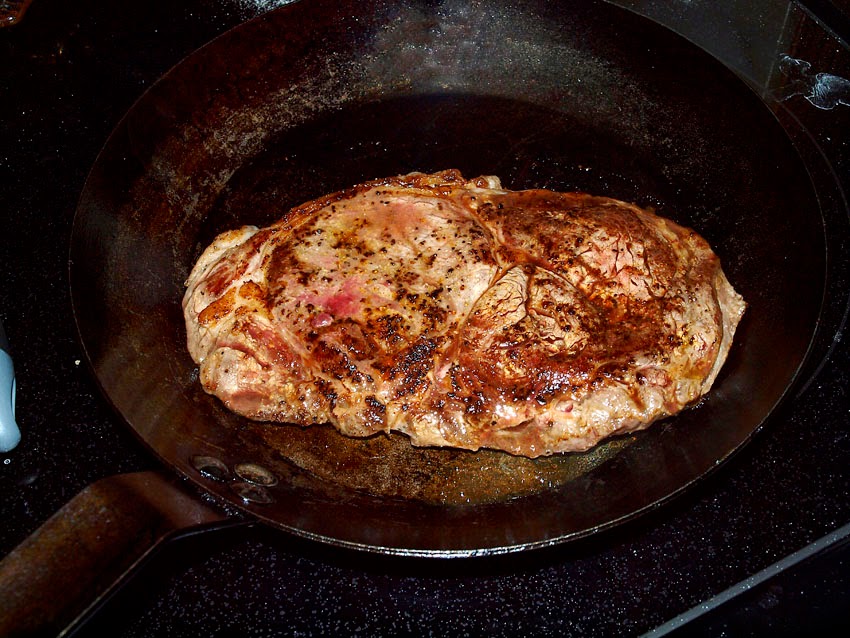 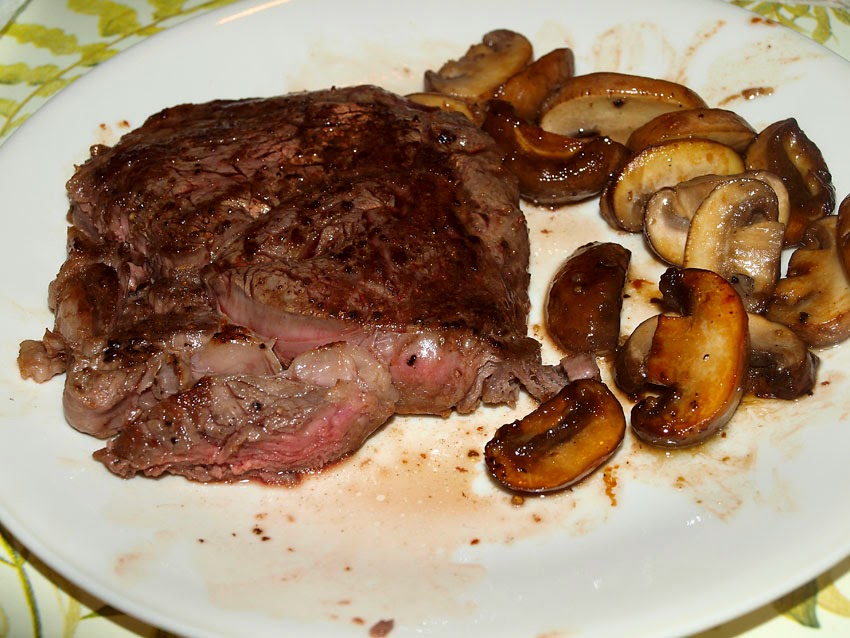