My new Weber rotisserie for my Spirit 200 was supposed to get here today. Yesterday I bought a chicken; not my favorite brand, I had to settle for a Tyson and the smallest I could get was 5 lbs. I wanted a 3 to 4 lb. The Tyson chickens have 12% solution added so I soaked it for two hours before starting the brine.

It has been more than 20 years since I had a rotisserie to use. I picked a recipe from the Weber site for my first cook. It was for a dry brined Cuban flavored chicken. It called for it to be brined uncovered in the fridge for 24 to 36 hours. After soaking the chicken I rinsed and dried it well then rubbed on the dry brine and in the fridge.

If my rotisserie didn’t get here in time I was prepared to do it on my pellet smoker. It came at noon so I got it bolted on and set up. On the Spirit it looks like I will be limited to about a six inch diameter roast to clear the drip pan enough. For the chicken I wanted to tie it up good so it stayed put.

I heated the Weber up to 350 to 400 deg. and got the chicken on at 4:20. I added a cut up a red, orange, and yellow pepper, a cut up onion and some garlic scapes to the drip pan. I added ¼ cup of Kikkoman’s Ponzu sauce and beer for liquid as needed.

I had some Mahatmi saffron rice in my rice cooker and I would have a salad plate of refried beans, fat free, with cheese on top, lettuce, salsa and avocado.

When I planned this meal my wife forgot she was going with her aunt to a progressive dinner the local churches were having tonight. I told her it was too late it was already in motion. The daughter in law, grandson and I will eat.

The pepper onion mix probably would have been good if added the last 30 to 45 minutes. I will probably only use the drip pan for moisture and seasoning, or making gravy from now on when using the rotisserie. I will also up the temp to get some more browning at the end of the cook.

For the dry brine

Ready for overnight in the fridge 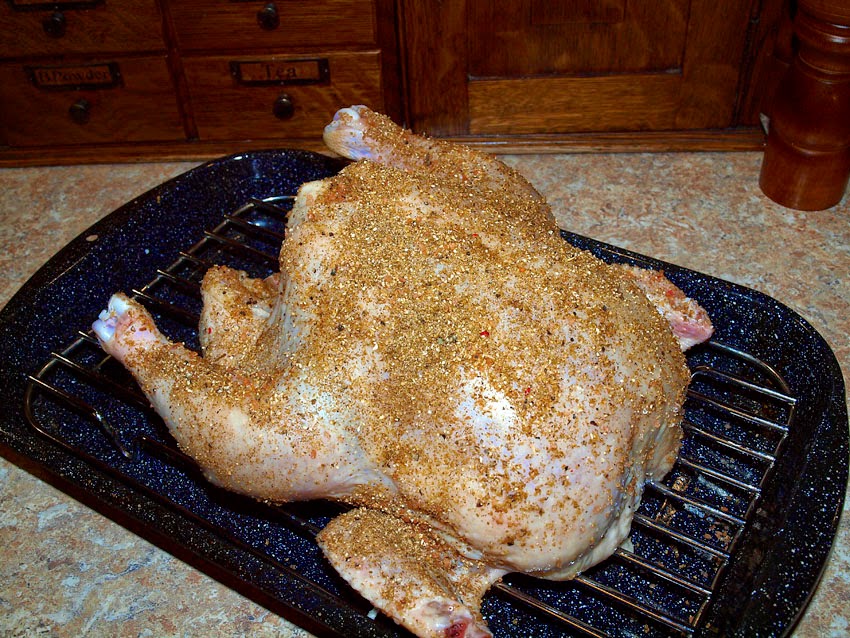 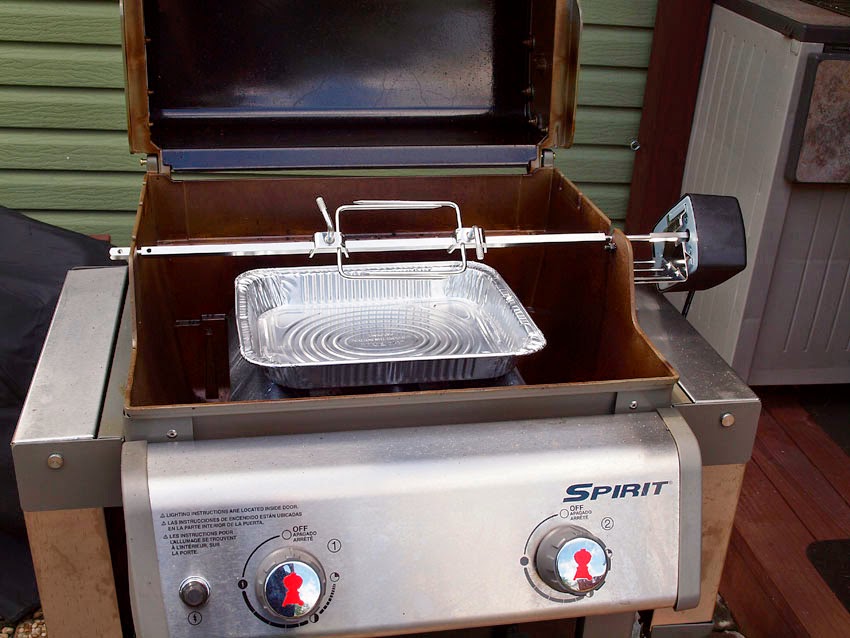 Ready for the spit 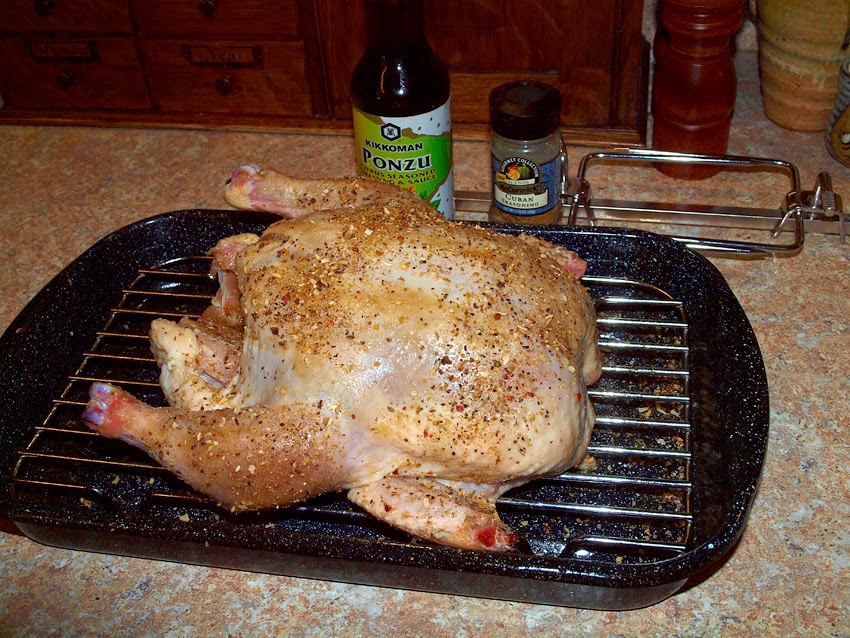 All tied and ready to grill 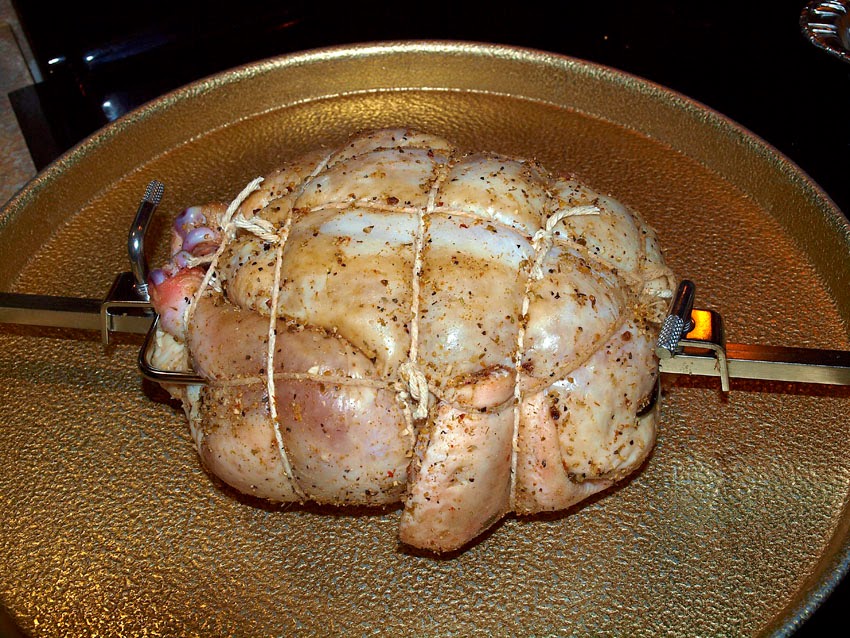 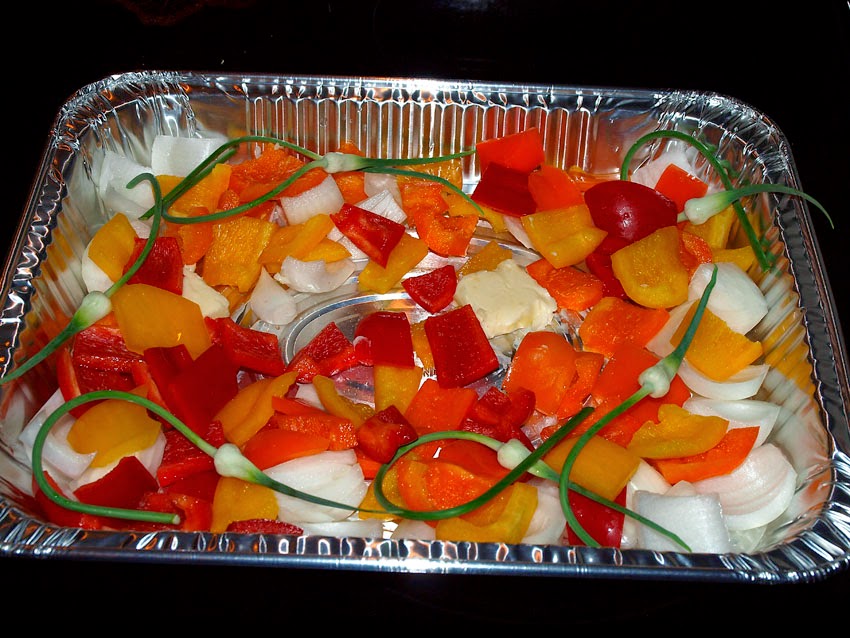 A half hour in 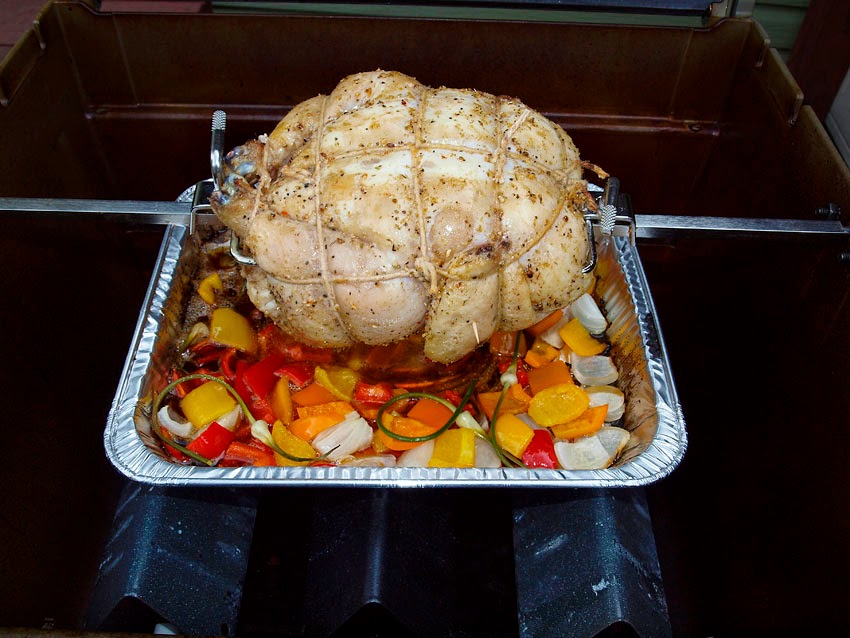 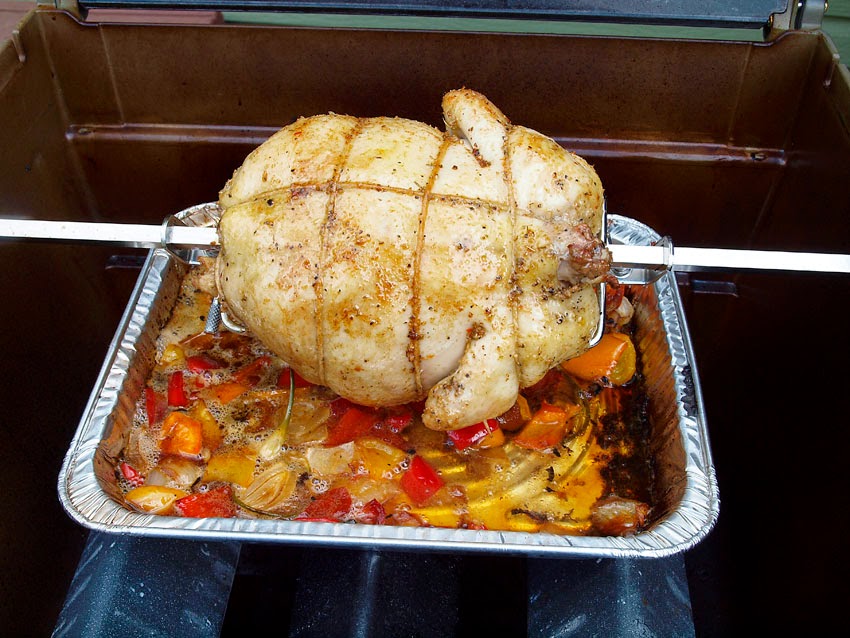 An hour and a half in 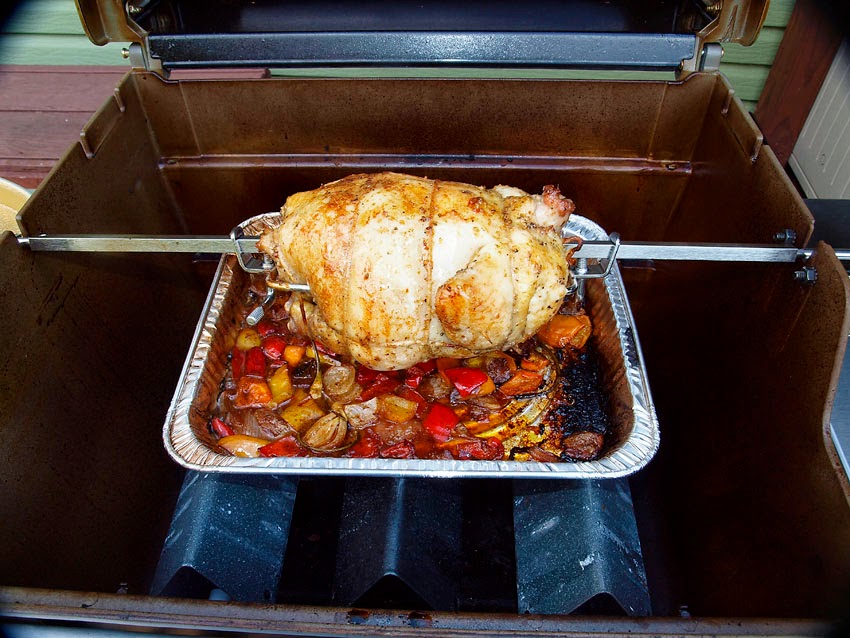 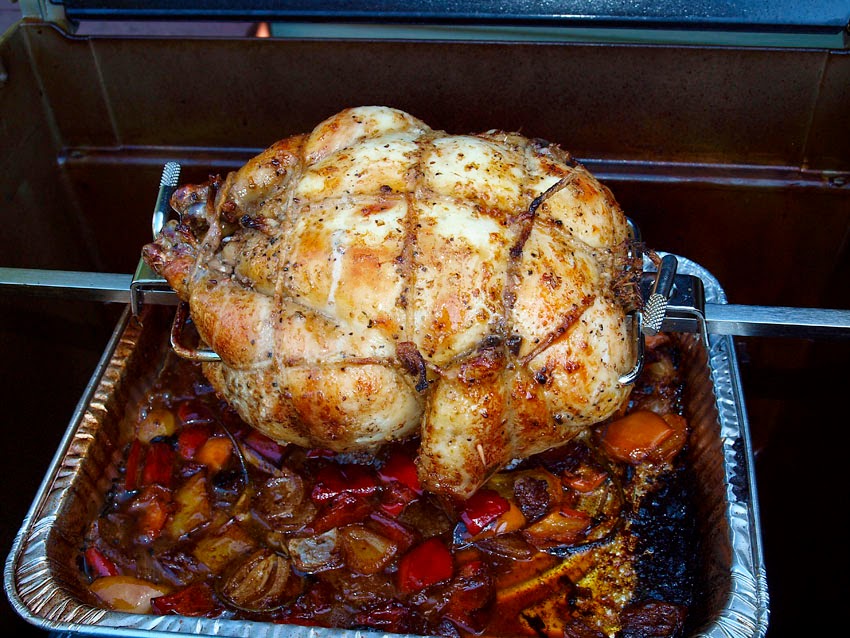 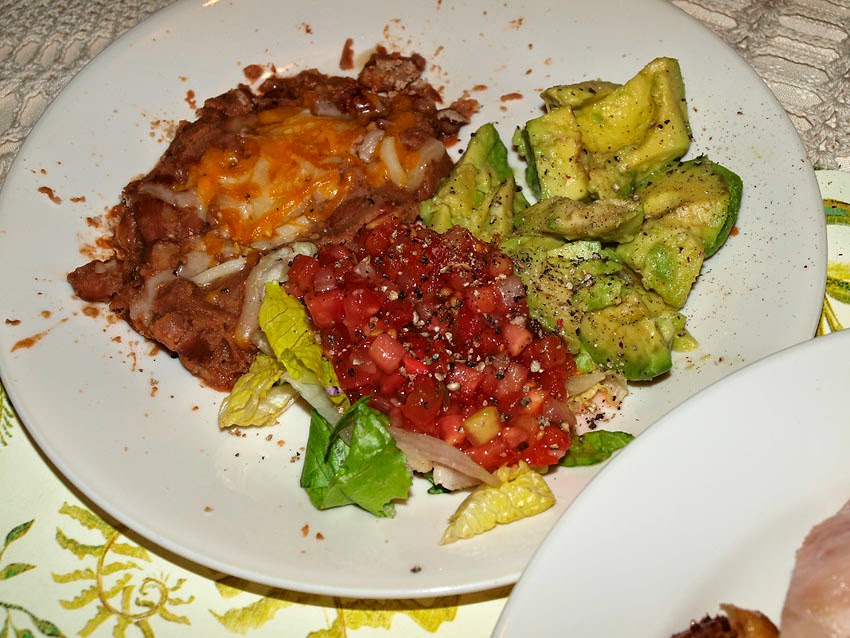 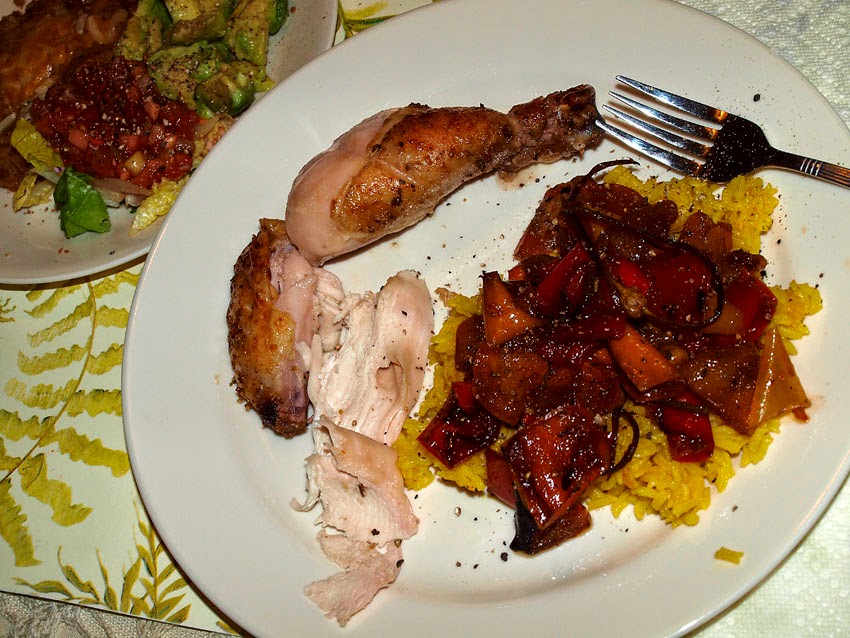